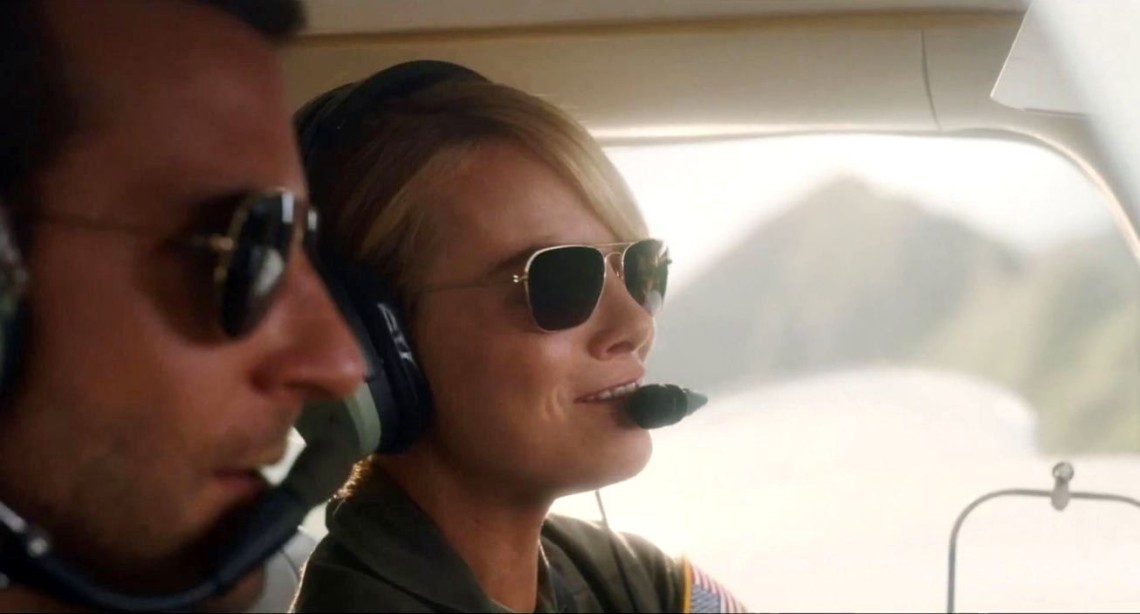 To explain it in the most Cameron Crowe terms possible: watching Aloha is like hearing a new album by one of those bands you loved in high school, but you’ve both kinda gone your separate ways.

There was a time, however brief and wonderful, when this band seemed to be writing songs that really spoke to you, but their years of success and isolation have taken a toll – not to mention the fact that you are no longer who you were when you were a teenager. It’s intermittently exciting to hear them recycling riffs and mirroring certain lyrics from the old tunes, but they’re also writing hermetically-sealed road-songs that sound awfully familiar, blowing the choruses out into such big arena-rock that their point-of-view no longer overlaps with your own the way it did way back when you were both much younger and way more naive.

Sure, you can hum along for a few spins and try to convince yourself they’ve still got it. But by the time the tour rolls around this summer, you know you’re just gonna end up going to take a leak whenever they start playing the new stuff.

I only went out for a piss once during Aloha, but I didn’t exactly hurry back. Sure, it’s a Cameron Crowe movie through and through – full of reportorial detail, foolhardy young lovers, and heartsick, jingling-guitar pop songs on the obsessively curated soundtrack. It’s also – as has been the case throughout his 15-year slump since Almost Famous – weirdly ersatz and clangy. Crowe’s still doubling down on the artifice of his woebegotten Elizabethtown, leaning on increasingly heightened screwball dialogue and bizarre behavior that’s a far cry from the easy, human moments that defined his best work.

Aloha is a song Cameron Crowe’s been playing for the most part since 1996’s Jerry Maguire (still maybe the most purely satisfying Hollywood comedy of that particular decade). A hotshot cock-of-the walk meets his comeuppance, and it’s only through the patient guidance of an awkward salt-of-the-Earth gal that our hero eventually realizes what is right for him (and her) so they can all live happily ever after. Verse, chorus, verse.

But with every subsequent film, this formula seems to come more increasingly unhinged from any recognizable semblance of reality. The travails of Elizabethtown’s solipsistic futuristic-sneaker-designer are a far cry from Cruise’s (relatively) grounded sports agent. And having lost my own job just a couple months before We Bought A Zoo was released, I assume I was probably not the target audience — but let’s just say I didn’t once consider buying a fucking zoo while I was scrambling to pay my rent. Remember, this filmmaker once had Tom Cruise and Renee Zellweger get married just to keep her health insurance. Now his movies seem to take place on Mars.

And this Aloha is a totally a Martian movie. Bradley Cooper stars as a disgraced former pilot, wounded in Afghanistan and now working for a sleazy private military contractor (Bill Murray, so gleefully dissolute I’m not sure if he even knew a camera was rolling half the time). They’re going to launch some sort of top-secret highfalutin’ spy-satellite in Hawaii that makes less sense the more they try to explain it, but Cooper (who grew up on the island) has been brought in as a P.R. ally to smooth things over with the locals.

He’s also been assigned a fighter-pilot babysitter (Emma Stone) who’s all incredibly doe-eyed and uptight, constantly telling our protagonist he was meant for better things — except when she (literally) kicks off her heels to dance with Murray to a Hall and Oates song in a scene that has no place in this movie, except Cameron Crowe was making a movie with Bill Murray and Emma Stone and he just felt like letting them dance for three minutes, dammit. (They’re great. It’s the best part and it doesn’t belong here at all.)

Cooper’s stick-in-the-mud still hasn’t gotten over his old girlfriend, played with a grace and depth the film never earns by Rachel McAdams. She threw him over a dozen years ago for a mute hunk (John Krasinski, infinitely more appealing when he isn’t allowed to speak) and Aloha summons a frisson of real vigor and visual intelligence upon their reunion. In one 360-degree pan, Cooper steps into the kitchen and challenges her domestic contentment with an effrontery we’ve not seen from this bumbling character, only to be rebuffed by McAdams in a manner best described as halting. It’s an electric moment that reminds you what a terrific filmmaker Cameron Crowe can be.

There’s nothing else like it in the rest of Aloha.

Absurdities compound into surrealism. Read no further if you fear spoilers, but Murray turns out to be Auric Goldfinger – his communications satellite equipped with “a secret second nuclear payload.” Cooper saves the day via the assistance of a basement-dwelling computer hacker downloading “the entire history of recorded sound” onto this super-weapon, thus causing the doomsday thingie to self-destruct because of David Bowie songs.

Pop music saving the world is probably catnip for Cameron Crowe auteurists but it doesn’t make a goddamn lick of sense in this particular context. Not to mention it takes the movie another 20 minutes to ramp back down to planet Earth (literally) and even has Alec Baldwin farting around – not coincidentally giving his worst performance since Elizabethtown– explaining everything we just saw because nobody could be arsed to do so while it was actually happening.

Then eventually we see Cooper hook up with Emma Stone already so the movie can finally end. And the camera pushes in for some dewy-eyed, gooey closeups, and the sappy acoustic guitar goes jingle-jangle, and I desperately needed to go to the john.