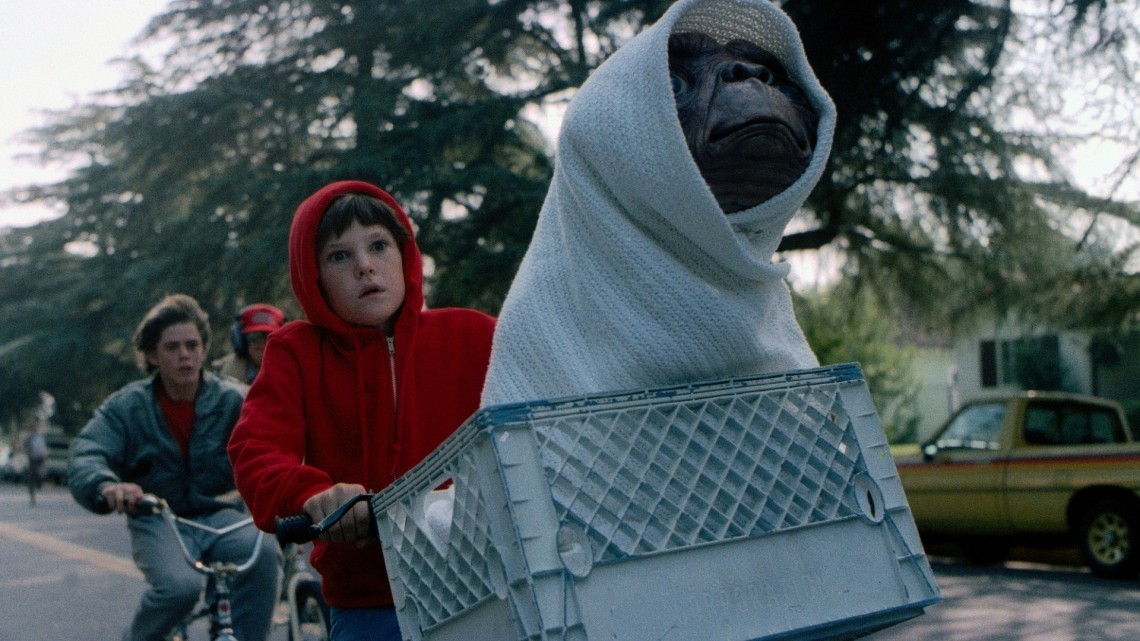 Alissa Wilkinson on one of Steven Spielberg's classics, from the POV of a first-timer, "E.T."

Every other week, Alissa Wilkinson looks back at an iconic piece of cinema in the Adult Beginners column. The twist? She’s watching each of these films for the first time, approaching them with fresh eyes and mature context. This week, she’s discussing E.T. the Extra-Terrestrial.

Since I started writing this column, I’ve watched some truly great films that everyone figures someone who writes about movies professionally has seen: Chinatown, Breathless, Citizen Kane. But none have elicited as many raised eyebrows from interlocutors as E.T. the Extra-Terrestrial, released the year before I was born.

I did have a memory of one shot from the film: E.T.’s long, slimy fingers poking at some Reese’s Pieces. (By the way, in the months after the film’s release, sales of the candy shot up astronomically—accounts vary between 65% and 85%.) That memory lingered in my mind the way strange, sticky images from your childhood often do: I had no idea what it was from until much later, and though it seems to indicate that I saw the movie, I didn’t remember anything else.

But the reason everyone raised their eyebrows (the reason your forehead is wrinkling now) is that while Spielberg’s film is a definite classic, it doesn’t just fall into the same category as Welles’s or Godard’s. It’s not something we all know we should watch—it’s part of the wallpaper of memory for any child of the 1980s, and most others, too.  I couldn’t find one other person in my acquaintance who hadn’t seen it.

Part of the blockbuster boom (E.T.’s success was only surpassed by Jurassic Park, 11 years later), E.T. is aware of its placement in film history. You can tell, because Star Wars is everywhere, from action figures to posters on the wall. Can you imagine trying to make a film about an alien 5 years after the most commercially successful and beloved space opera of all time? Knowing that most of the kids in the theater had probably been obsessed with Star Wars for years (probably some of their parents, too), E.T. managed to signal in a couple smart strokes that this was a movie for them, that this was their story.

For many of those kids, it may have been. It’s a story about a kid coping with his parents’ split, and with feeling like a misfit. Spielberg based the film on an imaginary friend he invented as a kid after his own parents split up. And even kids whose parents stayed together know the feeling of hearing them fighting and wondering if they won’t, or of feeling like an alien, of a sort, in the middle of a sea of kids at school who seem to be much cooler. The movie quickly creates a world that is familiar, then drops in an unfamiliar element: an alien whose fate seems nonetheless linked to the child’s. That is a remarkable feeling, to know that you’re less alone even in your strangeness.

And here is the most surprising thing about E.T. the Extra-Terrestrial: it’s amazing. Not in a nostalgic way; it didn’t remind me of watching it as a kid, or of being a kid. It’s just a compellingly written story that doesn’t bother filling in some of the narrative gaps, sacrificing some exposition—which kids don’t care about anyhow, and which adults are willing to overlook if you give a good enough substitution—for set pieces that work overtime and scenes that fulfill adolescent fantasies (escaping the cops on bikes!).

The film sets itself up for a huge task from the beginning. A few quick scenes and we care about the children (tiny Drew Barrymore goes a long way here), but engendering sympathy for a weird-looking alien who could, at any moment, turn out to be violent or menacing is challenging. The film manages to quickly construct him as both super-intelligent and kind of a potbellied puppy dog, always getting into scrapes, drinking the beer in the fridge, playing with toys meant for kids barely out of diapers. Our affection builds so rapidly that by the time his life is in peril, we’re fully invested.

I watched E.T. with two men who are older than me—my husband and a friend—both of whom watched the film as children. As the credits rolled, both said they felt wrecked, as nervous as they had been when they were kids curled up on their parents’ couches. I was surprised how deeply I’d become invested in the film, too. My fate didn’t get linked with the film’s as a kid—but now? I understand.

One thought on “Adult Beginners: “E.T. The Extra-Terrestrial””