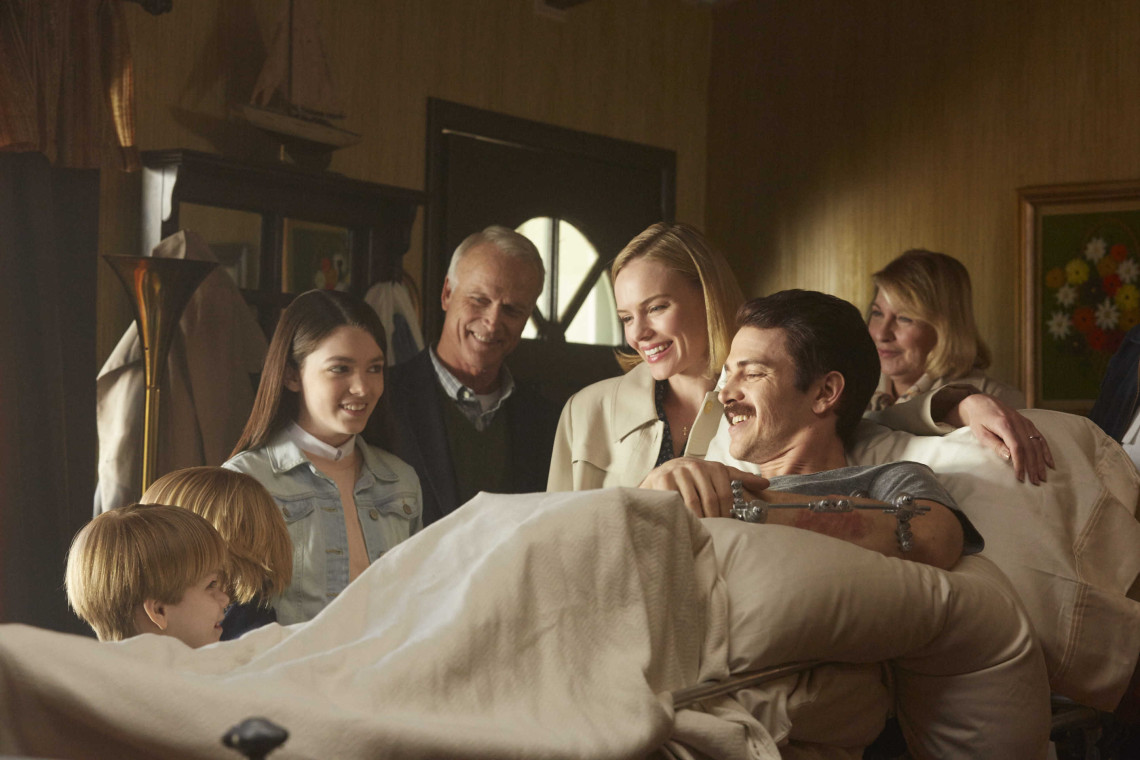 For starters, the film is 121 minutes long so I feel a bit snookered by false advertising.

Smarmy, I know. But what else is there really to say about 90 Minutes in Heaven? Based on the book by Don Piper, which I’m told has sold over 6 million copies, it is a staggeringly uneventful movie made for an audience to which I obviously do not belong. Despite the fact that they’re seldom shown in my liberal elite corner of the Northeast — where I live surrounded by gay-married godless heathens and pederast clergy — I do try to check in on these faith-based Evangelical films from time to time, as they’re racking up some big box-office cash as of late and I’d be derelict in my duty to skip out on a phenomenon.

Lawd, I tried but I just don’t get it. Hayden Christensen, who will perhaps live forever in ignominy as Anakin Skywalker, stars here as Piper — a goodhearted preacher with an unfortunate mustache and a fondness for ugly sweaters. As we all learned back during the Clone Wars, Christensen’s range is a mite limited and his affect tilts to the creepy. Indeed, in an early attempt at a heartwarming scene with his wife Eva (Kate Bosworth) the actor’s ill-fitting Ned Flanders costume and curious Southern accent made me feel like I’d stumbled upon an old “SNL” sketch about a child molester.

But this new church is not meant to be, as on the drive home to East Texas, Don’s Ford Escort is flattened by a tractor-trailer truck. It’s a grisly wreck and he’s pronounced dead on the scene. Quite some time after the paramedics pull a tarp over the crushed vehicle, awaiting a coroner, one of Don’s colleagues (“a real prayer-warrior”) stops by and asks to pray with the deceased. He crawls in through the trunk and begins singing “What A Friend We Have In Jesus.”  That’s when Don’s dismembered corpse wakes up and starts singing along!

You’d think this whole Lazarus zombie routine might be a big deal, but the medical professionals quickly shrug off their bum call and instead, the next hour and change of the movie is devoted to Hayden Christensen moaning in hospital beds for several months, suffering intense turmoil that’s only conveyed to us via that damned narration.

I’m frankly at a loss to convey how little happens during 90 Minutes in Heaven. It’s a movie almost entirely devoid of incident, with Christensen morosely reading passages from Piper’s book in voice-over while he lies in bed looking agonized. Some thirty-something surgeries later, he gets better.

At the 97-minute mark (seven past the title’s promise), Don finally admits to a seldom-seen friend that during all that time he was clinically dead in the totaled car, he’d ascended into heaven and yessiree, it was all it was cracked up to be. But he doesn’t want to tell anybody because they’ll all think he’s crazy. Don’s friend says he should tell people, and that they won’t think he’s crazy at all. He does, and they don’t. That’s the end of the movie. Sorry for the spoiler.

(Oh, then later, the real Don Piper comes out and repeats everything Hayden Christensen said already. But we don’t mind because he’s way more charismatic than Anakin.)

Director Michael Polish was a big deal out of Sundance some 15 years ago for chintzy David Lynch/Coen brothers knockoffs like Twin Falls Idaho and Northfork. I honestly hadn’t thought about him or his films for at least 10 years, but he does bring a certain visual finesse to a genre that typically looks like bad television. Every shot of 90 Minutes in Heaven is staged like an ancient religious painting, with beams of golden light streaming all around the widescreen canvas. Shame there isn’t anything going on here to photograph.

These characters don’t have edges, conflicts, nor really any discernible qualities besides dull piety. Piper’s book hasn’t been shaped into anything resembling a story – it’s some unfortunate stuff that happened to a guy and he got over it, eventually. It took me three tries to even stay awake through this whole damn movie because there’s no energy to it, nothing at stake. It just sits there, beatifically glowing.

I did admittedly succumb to a bad laughing fit late in the film when Christensen is describing heaven to Bosworth in the most floridly over-written, non-conversational terms imaginable – for some reason feeling the need to explain to his wife who folks like his grandfather and all his deceased old friends were in flowery detail, as if she’d never heard of any of these people before. The hackneyed visual tropes and gooey music, along with Christensen’s molasses accent and droopy moustache suddenly rang a familiar bell. Polish is still ripping off the Coen brothers, and this is the end of Raising Arizona.

Maybe Don Piper did go to heaven. Or maybe it was Utah.