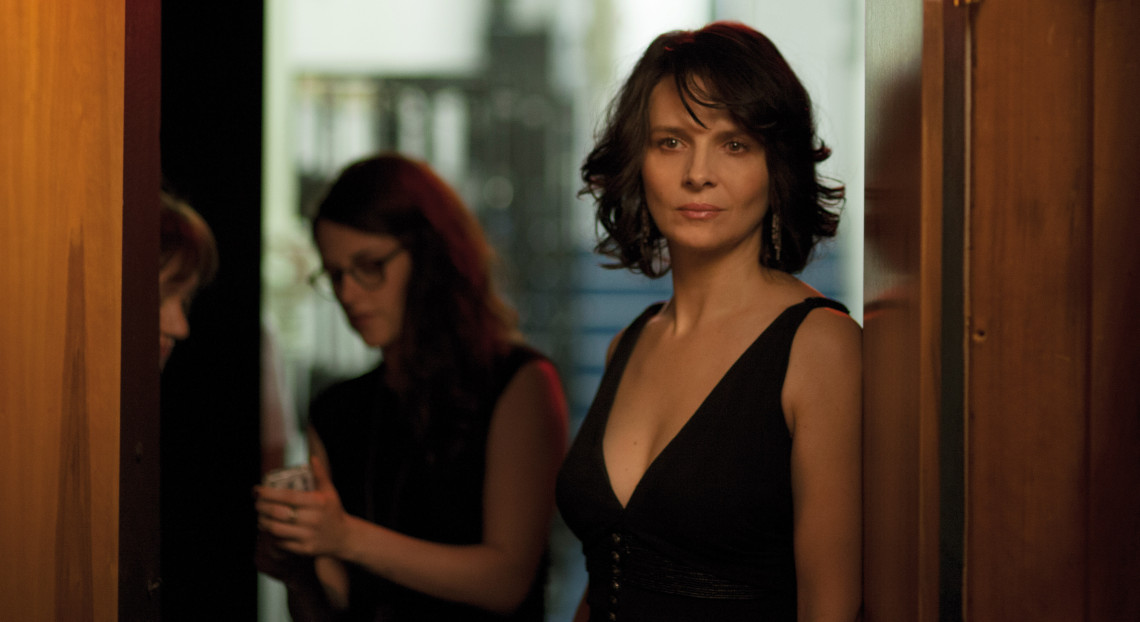 TIFF Review: “Clouds of Sils Maria” is Oddly Worth Remembering, But Not Watching

If there is any merit to Olivier Assayas’ Clouds of Sils Maria it’s that it serves the memory in a finer way than it does the eye. Asked to take on a revival of the play that made her famous as a youth, Maria Enders (Juliette Binoche) must take on the role opposite to that which she played in her past. Having once played the role of Sigrid, she has now been asked to assume the role of Helena, the older woman who Sigrid, by strength of her seduction, tempts and drives to suicide. Together with her trustworthy assistant Valentine (Kristen Stewart), Enders finds hermitage in the home of the play’s deceased author, and sets out to shoulder Helena’s plight, and through it, comes to the brink of understanding herself. Though boasting of a fascinating plot, Clouds of Sils Maria is primarily a film of ideas. Assayas’ 124-minute pondering over the manifestation of art in life yearns not just for reflectiveness, but also beauty and nobility, and it flounders precisely due to these latter qualities that make the film a laborious and overdone experience.

A marvelous actress in her native tongue, Binoche’s role as Maria Enders demands her to be both a bare, vulnerable celebrity and an exceedingly gifted actress. The major strains in believability throughout Assayas’ film, however, are difficult to disregard. Binoche, though capable of playing out vulnerability inimitably, continually looks more as though she is reading words than speaking conversation, shattering, in turn, the believability of Enders as a considerable actress. When assuming the role of Helena, she is no different than the similarly middle-aged Enders, and though this, among others, could be in line with Assayas’ countless meta-commentaries regarding art’s imitation of life, it is executed with extensive instability throughout the film, putting to doubt which moments were strictly intended by its director, and which emerged by pure happenstance. In some scenes, Binoche, a purveyor of emotions, shines and frightens with her acting prowess, particularly in a scene that begins with a nervous breakdown. At first, it’s even difficult to distinguish whether Maria is undergoing the attack or Helena, and when it is revealed; the Enders character gains newfound credibility as a great actor. Haplessly though, the believability abates moments later, when she is asked to carry a conversation.

Stewart’s role, instead, does not demand her to stray far from the familiar roles of her past, but how she speaks and how she expresses the understated emotions required for her character are impressive, and on many occasions, she outshines Binoche. Her presence in the film is not different from the storyline choice of Jo-Ann Ellis (Chloë Grace Moretz) to play the role of Sigrid in the revival. Both Ellis and Stewart are performers who never seemed keen on making a name for themselves in the worlds of theatre and high-art. Ellis’ claim to fame comes from a blockbuster science fiction film, while Stewart’s resume is self-evident. Yet given the opportunity, Ellis outdoes Enders as Sigrid, as Stewart accomplishes an almost identical feat in the film itself with regards to Binoche.  This one subtlety is Assayas’ best. It is not riddled with over-explications as are the rest of the nuances the director endows his film with.

Despite some great performances, it is precisely Assayas’ script that burdens the intelligent though heavy-handed film. When Enders and Valentine sit together at a bar after having been subject to Jo-Ann Ellis’ unmistakably awful, star-making science fiction film, their entire conversation seems labored, giving the air of being equitable to both characters’ opinions, but essentially inclining toward Binoche’s elitist ideals. Fairly, she is right to feel the way she does after having been witness, together with the audience, to the film that Assayas deems as “American science fiction.” Ellis’ star-vehicle is a tawdry and atrocious sight, complimented by our film’s director with appalling dialogue and even fouler set designs and costumes. Assayas’ patronizing look down upon modern American blockbusters, though certainly warranted, comes off here as unsophisticated. As the overabundance of science fiction films in recent years prove, as asinine as some of them may be, production value is one facet that cannot be used against them: they are incredible to look at, even when they are hard to watch.

In contrast, Clouds of Sils Maria is neither pleasant to watch nor look at, but it is undoubtedly a joy to remember. That the film is treated by memory in a far better light than our immediate senses is because the ideas Assayas presents to us are indeed noble, beautiful, and reflective. What’s taken away from the film are exactly the notions it’s introduced rather than the machinations that made it such an arduous task to watch.

Possessing no stakes, no emotional core, no tangible lure, the film demands only fragmentary cerebral investments from its viewers. It is truly interesting how little is at stake for Enders and her risky endeavor to creep under the skin of Helena. It also stirs very little relatability, but this lack of relatability is a virtue, and speaks of Assayas’ courage as a director. No art should appease to mere relatability, and the film means to transcend the everyday to detail an exceptional, far off experience of an artist. Courage aside, however, Assayas stumbles when it comes to depicting exactly how taxing of an experience an undertaking of different roles is for his characters. Sequentially impaired as well with back and forth scenes depicting either life or art, the film simply doesn’t run as smoothly as it should, nor does it suggest anything beyond its symbolism. Filled with ideas but void of heart, the emotions in the film feel as if they were sprinkled upon the final product like salt, some parts savory, and others, utterly empty of any taste, confusing the senses, and leaving memory to clear it of its disarray.