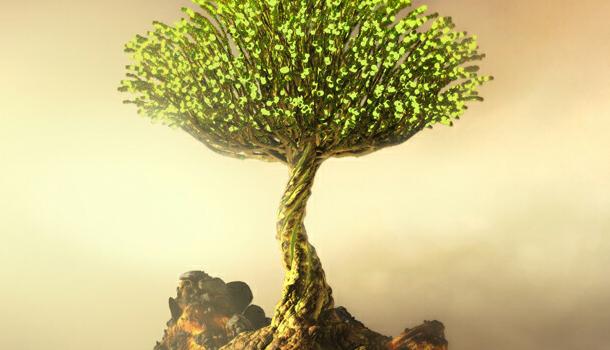 In a world of features, short films rarely get much attention. Yet the best five-minute shorts usually contain more originality and creativity than your average Hollywood blockbuster. That’s why we launched Short Stuff, a weekly profile on a promising short-form filmmaker and their newest piece of work. Think of it as an investment in the talent of tomorrow.

From the dark depths of space, an unmanned drone pieces the atmosphere of a lonely planet and slams into its inhospitable surface. Where it came from is a mystery, but its purpose soon becomes clear. Painstakingly rendered by self-taught animator Richard Mans, this stunning 3D animation broaches plenty of big ideas over the course of its four minute runtime, and bolsters them with some truly stunning visuals. The robot, constantly changing and evolving, is a triumph of design, while the whole film goes to show just how much can be achieved in this day and age by an individual with the right amount of passion.

The film’s cyclical ending plays into its themes of life, death and rebirth, with Mans leaving plenty for his viewers to ponder. Abiogenesis screened in select cinemas in Europe, North America and Australia as an addition in the 2013 Oscar Nominated Shorts Program. Good company, and very well deserved.

Watch the film’s trailer, and check out my conversation with director Richard Man, below.

What is/are your favourite film/films?

How would you describe Abiogenesis in one sentence?

A creation myth for the modern era.

When did you know you wanted to be a filmmaker?

It’s been like a secret ambition since I can remember but I never thought it possible. Then a few years ago I started seeing examples of people making their own animated short films with just their computer and a piece of software. A real inspiration for me was Rustboy by Brian Taylor. Brian was using some old software program to make his short and helped me realise that it doesn’t matter what equipment I have, it’s what I do with it. Sadly Rustboy wasn’t completed but I clearly remember his project being a big catalyst.

Did you study film and/or animation, and if so, where?

No I am self taught in these areas. However I did complete a Bachelor of Media Arts majoring in Painting which I think influenced my approach to making Abiogenesis.

Tell me about some other film projects you’ve been involved with, if any?

I participate in a local 48 hour film making competition where we have 48 hours to make a short film. Most films are live action but a small team of us fool hardy animators try to make an animated short in this time. The results are pretty rough but the team I’m with has managed to successfully finish a film every year. I think it’s a good crash course in a certain type of film making.

Where did the idea for Abiogenesis originate?

In finding a purpose for my robot…when I started teaching myself animation I was fascinated with how the medium of the virtual world has no substance…everything passes through everything and the illusion of reality is simply created by the way objects are moved through this space. As I explored this idea I ended up with a robot that performed some interesting transformations but had no purpose. A few years later after seeing some animations of NASA’s Mars Rover missions, I was inspired to give my robot a meaningful purpose and send it off on a mission of its own.

From that initial idea, what goes into getting the film made?

A lot of time, savings, and a real determination to see it through to the end no matter what anyone tells you. Also some very talented people working on your music and sound design near the end.

How much time have you spent with Abiogenesis in total, from conception to production to having it screened?

Ouch, I try not to think about it. About five years. But the robot started to evolve the moment I opened my first 3D application fourteen years ago. I think it took me a while because I was also discovering my own process of filmmaking along the way. Hopefully I’ll have the process more down pat for the next one.

What inspired the design of the machine and the look of the film in general?

The robots design was a balance between form and function. The robot had to perform some very specific tasks in the film which would largely dictate its design, but at the same time it had to look cool in all its phases. It was very important that nothing was fudged and that we can see how everything fits together so it has an air of believability about it. Some shapes were worked into the design once the themes of the film became clear, like dragonflies (one of the first flying creatures on earth). The environment was inspired by New Zealand landscapes near where I live. Animations of the Mars Rover Missions were a strong influence for the start of the film as I wanted to set it up as something almost familiar but then deliver the unexpected. I treated the whole film like a painting, a luxury that working alone on a film can afford. As I worked and re-worked the piece, it eventually just felt right, the colours, shapes and arrangement of shots reached a point where I couldn’t see them working better any other way. 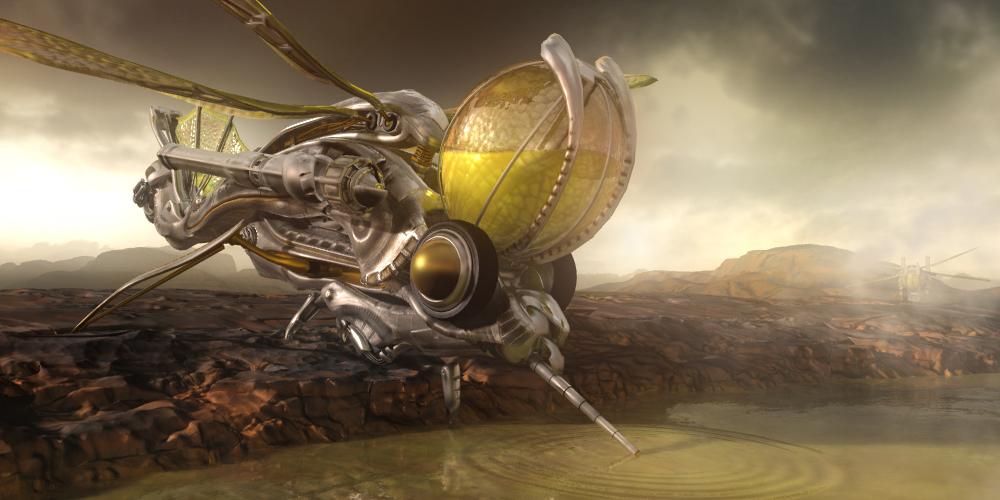 Is science fiction an area you’re particularly interested in? I think it’s a genre quite well suited to 3D animation, visually speaking; is that something you’d agree with?

Yes, a kind of science fiction/fantasy blend is my ideal space. I totally agree that the genre is well suited to 3D animation. I think that’s why a robot was the form that emerged when I was just playing around with the medium at the start. I think 3D animation [is] a great tool for exploring the imagination and expressing visions that would not be possible in any other medium.

One of the images from the film that particularly struck me was of the tree on top of the mountain. Was there a specific inspiration for that?

The themes of the film inspired these symbols. With the tree I [wanted] to reference the concept of a mythological Tree of Life, or Tree of Knowledge.

The film is dealing with quite profound, even religious subject matter. Was this something you were particularly interested in exploring? Do you yourself know where the machine came from, or is it ambiguous even for you?

Wow, it’s awesome you get that from the film. Yes, I wanted to throw a spanner in the works, make us consider our origins and that perhaps we don’t have all the answers, maybe never will, and there’s a great sense of wonder in not knowing. My theory is that the probe came from a civilisation that had searched their solar system and not found any other life. When their world began to die the people could not save themselves but some decided to build this probe to continue the legacy of life. Of course there were others who still believed there was life out there… I’m sure there’s a prequel there somewhere.

How did the film end up screening as part of the Oscar Shorts package?

Abiogenesis has been on the film festival circuit for a while now, won some awards and with some luck managed to get in front of the right people. I think the film’s G rating, no dialogue, and universal themes also made it sit well with this year’s nominees. A big thanks to the people at Shorts International who selected it to round out their feature length Oscar Nominated Short Films 2013 Animation presentation.

What do you think are the biggest challenges facing emerging filmmakers at the moment?

Finding your voice. There’s so much stuff out there. Also I think it’s an extra challenge to get things like Abiogenesis made. There are preconceptions about what film is…some people think a short has to begin with a script. I think this has to be true for features but not with shorts. Abiogenesis sounded ridiculous whenever I tried to explain it to someone and needed to go through a unique process to become what it is.

As a short filmmaker, how does the internet affect the way you market and distribute your movie?

I have no idea how you could possibly do it without the internet. It makes thousand of festivals and limitless connections available to you so hopefully any film of merit can find its audience.

What other projects do you have coming up in the future? Would you like to make the transition into features at some point?

It looks like another short is on the horizon. I’ve several ideas I’m working on at the moment. I would quite like to make this short idea I have that looks into the issues of colonisation that are touched on in Abiogenesis. Abiogenesis was quite distant in some ways, it was meant to be like we were outsiders bearing witness to some wondrous event. I’m now very interested in finding the human element, with a focus on strong characters. I am aiming for my next short to be part of a bigger feature idea.

Where are some of the places Abiogenesis has been screened so far, and where can people catch it now?

With the theatrical release of the Oscar Nominated Short Films 2013 Animation, it screened in hundreds of theaters thoughout the US, Canada and Europe, and is currently available on some VOD services. It has also screened in around 50 film festivals. [For a full list visit of previous and upcoming film festivals please visit http://www.abiogenesisfilm.com/Festival_list.html]

Abiogenesis will soon be available on iTunes and will screen as part of the Imagemakers TV series in the US. I’m also looking at it being included on a Blu-ray compilation of shorts. I’ll update the films Facebook page with details as soon as I have confirmed dates.

Where can people find more of you and your film online?

Is there anything else you’d like to say about yourself or the film?

Thanks for reading all this. I hope you got something from it. Now get back to that blank piece of paper or computer screen and start creating. Who knows where it could lead.