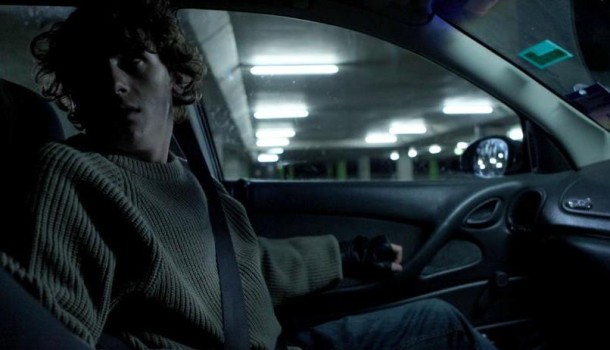 In a world of features, short films rarely get much attention. Yet the best five-minute shorts usually contain more originality and creativity than your average Hollywood blockbuster. That’s why we launched Short Stuff, in which we profile a promising short-form filmmaker and their newest piece of work. Think of it as an investment in the talent of tomorrow.

A quadriplegic is confronted with his injury in Sophie Miller’s Spine, a superbly made and extremely well acted Australian short that succeeds as both a compelling character drama and a first rate thriller. Winner of the Best Australian Short Film award at last year’s Melbourne International Film Festival, the film features Snowtown star Lucas Pittaway as Nick, a young man recently confined to a wheelchair, who witnesses a vicious assault, and then finds himself face to face with its perpetrator.

A major up-and-coming talent, Pittaway brings genuine dimension to a difficult role, while actress Sara West, as his girlfriend Chloe, allows us a poignant glimpse into a relationship under a unique form of stress. Miller’s direction matches the quality of her cast, as she slowly and purposely reveals more information about her characters while ratcheting up the tension through smart, effective editing. All in all, there is some serious talent on display in Spine, and I think we can expect exciting things in the future, from cast and crew alike.

Watch the film’s trailer, and check out my conversation with director Sophie Miller, below

What is/are your favourite film/films?

This question is always a tough one because there’s just so many. Eternal Sunshine of the Spotless Mind, Fargo, American Beauty, Magnolia, Pulp Fiction and One Flew Over the Cuckoo’s Nest are some of my favourites.

I was obsessed with watching movies as a kid and decided I wanted to be a filmmaker when I was 17.

Did you study film and if so, where?

I did a Bachelor of Arts majoring in Screen Studies at Flinders University, Adelaide.

Tell me about some other projects you’ve been involved with?

I directed a couple of shorts before Spine and for the last few years I’ve been working in development for Matchbox Pictures on projects such as The Slap. In 2012 I was the second unit director, under Robert Connolly, on the Matchbox telefeature Underground: The Julian Assange Story. More recently, I’ve been developing a couple of comedy series for Matchbox as a creative producer.

Where did the idea for Spine originate?

Spine is based on an idea by Tony Ayres [director of The Home Song Stories] who I work with at Matchbox. He pitched it to me and I was instantly hooked by the idea of using suspense to explore life with a spinal cord injury. It was a really interesting approach and I felt like I hadn’t seen it before.

When did you start working on the project?

Tony pitched me the idea in early 2010 and I began researching and writing soon after. Sheila Jayadev came on board to produce and we shot the film in 2011 and finished it in 2012.

What was the casting process like? I’m particularly curious about how Lucas Pittaway became involved.

I love casting and finding Lucas to play the lead role of Nick was very exciting. I was looking for someone with a powerful screen presence who could convey Nick’s vulnerability and inner turmoil. Then I saw Snowtown and was blown away by Lucas’ performance. It’s an amazing film and he’s captivating in it. We sent him the script and fortunately for us he liked it and agreed to do it. For the rest of the roles, I worked with a fantastic casting director called Marianne Jade at Maura Fay Casting. Marianne and I worked together on my previous short and she’s got a great eye for talent.

It’s somewhat rare to see a film with a disabled lead character, doubly so when the film is a thriller. What kind of research went into the depiction of Nick’s disability?

I didn’t know anyone with quadriplegia before making Spine so it was really important to me that the character of Nick and his relationship with his girlfriend was portrayed with authenticity and depth. Before I started writing I did a lot of research. I got in touch with Spinal Cord Injuries Australia and met with the late David Prast and Leila Mitchell who were incredibly open and supportive. They introduced me to three terrific young men, who ranged in age from 18-28, and all with C5-C6 level injuries, which is the same level of injury Nick has. Meeting and talking with these guys was a humbling experience.

I went on to spend a significant amount of time with one of them, Dan, and his girlfriend Jackie, who opened up their lives to me through the writing process. Their candour and trust during our many meetings was extraordinary. Dan and Jackie also played a significant role in helping Lucas and Sara West (who plays Nick’s girlfriend Chloe) gain insight into their characters, and the dynamics of their relationship. The meetings they had during rehearsal were invaluable and greatly influenced Lucas and Sara’s ability to transport themselves into the roles of Nick and Chloe.

The film deals with notions of helplessness, and victimisation, versus empowerment. Are these themes that you’re particularly interesting in exploring on film?

It’s always fascinating to hear what people take from the film. They are certainly themes that I was interested in exploring in Spine. In general, I tend to be led by the story, and the themes that emerge are a process of discovery.

How much time have you spent with the film in total, from conception to production to having it screened?

I started research in early 2010 and it screened at its first festival in mid 2012. So I’ve been working on it on and off for two and a half years.

Were there any films or filmmakers that were of particular inspiration to the film?

The documentary Murderball was a big inspiration during the writing process and key to my decision to make Nick a young character. The Diving Bell and The Butterfly was also very inspiring due its extraordinary vision and ability to transport you into the mind and body of someone with Locked-in Syndrome.

What do you think are the biggest challenges facing emerging filmmakers at the moment?

Making a film that cuts through. There are so many great films out there that it can be hard to get your film noticed.

As a short filmmaker, how does the internet affect the way you market and distribute your movie?

The internet is an incredible tool for marketing and distribution. It’s fantastic for building awareness, connecting with an audience, and creating a community around your film. Facebook in particular has been great for us and we get a real kick out of connecting with people so directly. We are still in the middle of our festival run, so are yet to distribute the film online, but it’s exciting that there are so many platforms to get your film onto now.

What other projects do you have you got coming up in the future? Would you like to make the transition into features at some point?

I would love to! I’m working on a script at the moment that I’m really excited about. Next up though, I’m producing a comedy series, which is a new role for me, but one that I’m having a lot of fun doing.

Where are some of the places that Spine has been screened so far, and where can people catch it now?

It’s screened at Perth, Melbourne, Flickerfest and WOW film festivals. Coming up we’ve got Shortsfest in Adelaide, and then we’re off to the US for a couple of festivals.

Do you and/or the film have an online presence?