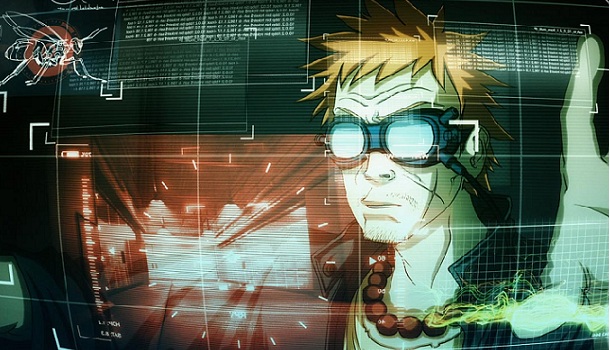 Short Stuff: Get A Violent Blast of Cyber-Punk Attitude in US Anime PostHuman

In a world of features, short films rarely get much attention. Yet the best five-minute shorts usually contain more originality and creativity than your average Hollywood blockbuster. That’s why we launched Short Stuff, a weekly profile on a promising short-form filmmaker and their newest piece of work. Think of it as an investment in the talent of tomorrow.

Director Cole Drumb channels the aesthetic and the atttidude of Japanese science-fiction in PostHuman, a six-minute long American anime with the production value of a feature length film. Tricia Helfer (Battlestar Galactica), voices Kali, a powerful telekenitic who enlists a wise-ass computer hacker to help her rescue her companion from a secret covernment lab.

The films’ graphic violence, futuristic setting, wicked-cool score and smatterings of existentialism recall landmark anime films like Akira and Ghost in the Shell; and the quality of the animation isn’t that far off either. The only real complaint I have of the movie is its scant running time (four and a half minutes if you don’t count the credits). Drumb and his collaborators have created a fully realized world populated by intriguing characters, who we pick up with at what feels like the climax of a much larger story. What came before is left to our imagination. But personally, I’d be thrilled to see more.

Check out the film’s trailer, and my conversation with director Cole Drumb and producer Jennifer Wai-Yin Luk, below.

Movie Mezzanine: How would you describe your film in one sentence?

A hyperkinetic blast of ESP and future-tech, plus there’s a dog.

When did you both know you wanted to be filmmakers?

JWL: Growing up, I was always interested in visual arts and music, and I was a voracious reader as well.  Utilizing visual and aural elements to tell stories is what film is all about, so it was the logical choice to pursue as an artistic endeavor.

Did the two of you study film, and if so, where?

CD: I have taken film studies classes at CU and in Seattle. I also spent years working at a video store. Combined, I’ve had some of the university experience and some of the video store experience. Beyond that, I wear the geek badge proudly.

JWL: All of my film education has come from hands-on experience working on projects that may or may not have seen the light of day.

What other films/projects have either of you been involved with?

CD: I worked in the film industry for about 15 years doing what I think was every possible job for every conceivable type of project – from industrial projects, to shorts, TV and indie features.

JWL: I have shot, edited, and packaged to DVD various live performances in Seattle. I have also worked as PA on LA productions that filmed sequences in Seattle.

Where did the idea for PostHuman originate?

Were there any films or filmmakers that were of particularly strong influence on you and your film? I have to assume you both watch a fair amount of anime?

Too many to list all of them, but: Shinya Tsukamoto, Peter Chung, David Cronenber, Ridley Scott, Shirow Masamune, Michael Mann, Katsuhiro Otomo, James Cameron, Shinichiro Watanabe, The Wachowskis, Moebius and without a doubt, the movie Heavy Metal.

The film, to me, feels like a small part of a much larger story. Is this just the tip of the iceberg, and can we look forward to more from these characters and the world they inhabit?

CD: The ESPer story is one I’ve been bouncing around for quite some time. I almost got it off the ground as another story and as a live action about 15 years ago. The story we wanted to tell this time around was much larger, which is one (and only one of many) of the reasons we went animation.

One of the film’s biggest strengths is just how insanely professional it looks. Can you tell me a little bit about the production?

The real heavly lifting of the production started with pre-production. We worked with storyboard artist Tom Price and boarded out the script. We utilized the storyboard frames to edit an animatic, including temp sound effects. We then worked with a 29-person crew at Humouring The Fates animation studio, who did an outstanding job with the animation.

I also loved the soundtrack by Neill Sanford Livingston. What kind of sound did you have in mind for the film, and what can you tell me about that collaboration.

We showed Sanford various Heavy Metal tracks. Tron: Legacy had just been released and the soundtrack blew our collective minds, but especially Sanford’s. He started riffing from there and did a phenomenal job.

On a technical level, what were some of the biggest production challenges?

If I remember correctly Matt Damon was at San Diego Comic Con for Elysium and he was asked what’s the most difficult project he’s worked on and his response was something akin to, “getting into the industry.” On a very specific note, financing is always the biggest obstacle and was the biggest obstacle for PostHuman. The project is self-funded [by Jennifer and Cole] which is great because we own the project outright, and tough because we are now seriously in debt.

How much time have you spent with PostHuman in total, from conception to production to having it screened?

This is probably our sixth year – it took us about five to carry from pre-pro up to festival submissions.

How did you cast Tricia Helfer?

We have been fans of Tricia Helfer since seeing her in Battlestar Galactica and Burn Notice. We reached out to Tricia’s agent through Wendi Wills at Bad Animals. Wendi went above and beyond in helping us with the technicalities of casting and working with voice talent.

What do you think is the biggest challenge facing emerging filmmakers at the moment?

As previously mentioned, getting into the industry remains the major challenge. Depending on the filmmaker’s situation, which is always unique to that person, you have one shot at it. So you get to hold the ball once and it’s gotta be a flawless hail-mary or you’ll never touch the ball again.

Otherwise I think the one new and unique issue emerging filmmakers face today is that the market is getting more and more crowded. Technology is always changing, that’s the norm. Nothing new there. The field getting exponentially more crowded, that is a dizzying situation.

As short filmmakers, how does the internet affect the way you market and distribute your movie?

We’re actually trying to navigate the distribution landscape right now, as we prepare for releasing PostHuman online later this year. We are learning – it is a steep and difficult curve.

What other projects do you have coming up in the future? Would you like to make the transition into features at some point?

We do want to move into features and believe it is time to do so. We have multiple feature scripts we are working on and hope to quickly get behind one of them and move into production. It’s a very exciting time for us.

Where, if anywhere, has Post Human been screened so far, and where can people catch it in the future?

PostHuman has been an official selection of more than 20 film festivals internationally, including Fantastic Fest in Austin, Sitges Film Festival in Spain, and Screamfest in LA, where PostHuman was awarded Best Animated Short. The next screenings of PostHuman are at Byron Bay International Film Festival in Australia and Little Rock Horror Picture show in Arkansas, both of which are coming up in March. We plan to release PostHuman online later this year.

Where can people find more of you and the film online?

Are you a short filmmaker interested in being featured in ‘Short Stuff?’ If so, please shoot an email to tomdclift[@]gmail[.]com