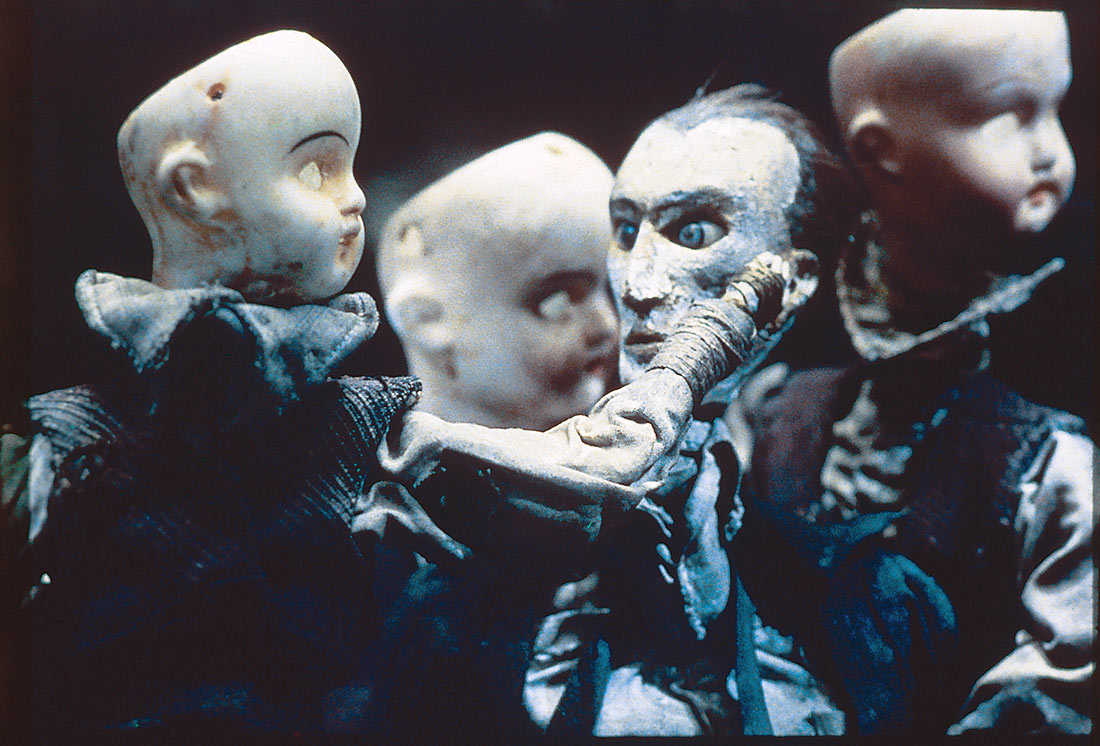 This Week on MUBI: “Street of Crocodiles”

One of the Quay brothers’ most well-known films, Street of Crocodiles is an ambient horror film in the vein of Eraserhead. Like David Lynch’s feature debut, the 20-minute short leverages abstract industrial imagery to connote a sense of overwhelming dread, and its stop-motion animation only compounds the sense of the total automation of modern life. Among other things, it may be the only movie to begin with a puppet being freed from his strings, only to feel even more trapped and manipulated by the end.

Apart from a brief introduction of a puppet master snipping the cords of his creation, the film takes place entirely within puppet’s “home,” a box filled with a miniature cityscape. The puppet comes to life when scissors loose him from his bond, but he immediately comes into sentience to find himself trapped in a claustrophobically dense urban block. The windows of his living quarters are smeared into opaqueness by sludgy grime, and he looks up to see the wan silhouette of his Creator walking away like an indifferent god.

The camera movement in the film is every bit as blocky but sudden as the animation, with eerily precise, geometric pans and tilts. The camera moves like a spider, a frightening staccato of pauses and darting rushes and leaps, and every movement pushes deeper into the thicket of caked streets and knotted, gnarled tenements and factories. Placing the background elements onto various sliding plates replicates the inventive 3D illusion of early Disney animated features with actual three-dimensional objects, and though the film regularly bumps into the boundaries of its compressed microcosm, it suggests incredible, unnerving spatial depth that continues to plunge through the fake city but to never emerge from it.

Thematically, the film is so blunt that, despite its lack of dialogue, it threatens to tell and not show. Nonetheless, the filmmakers find clever visual metaphors for their vision of mechanized industrial life. In one of the many close-ups of turning gears, a shot reveals a wheel made of razor blades, greased by blood. The climax, of empty-headed baby dolls processing both cotton stuffing and bloody, raw organs, is a particularly gruesome evocation of socialization as lobotomy. Adding to the unease is Lech Jankowski’s score, less musical than onomatopoeic, its strings matching the squeak of rusted screws loosening of their own accord and its faint, distant percussion timed to the ever-present clang of machines that churn in the city’s underbelly. Shot through with bracing static, Jankowski’s avant-garde composition may be the single most unnerving element of the entire film.

With a new Blu-ray set of the Quay brothers’ short films out now, MUBI’s programming of Street of Crocodiles is a great advertisement for both that release and the general impact of the filmmakers. It’s especially easy to spot the influence they had on Christopher Nolan, who spearheaded the Blu-ray and even contributed a short film of his own. One shot, of the puppet standing in the doorway of some sewer/laboratory, the dark gray walls unadorned but suggestive of clutter, is the blueprint for Nolan’s entire aesthetic of faux-Escherian pallor. As obvious as the film may be, it’s undeniably effective, and its constant focus on the minutiae of its animated life consistently depicts human sociality as material. Which, naturally, makes it immaterial.

If you’re interesting in watching Street of Crocdiles on MUBI, use your Movie Mezzanine coupon for an exclusive discount and access to a breathtaking library of cinema!

One thought on “This Week on MUBI: “Street of Crocodiles””