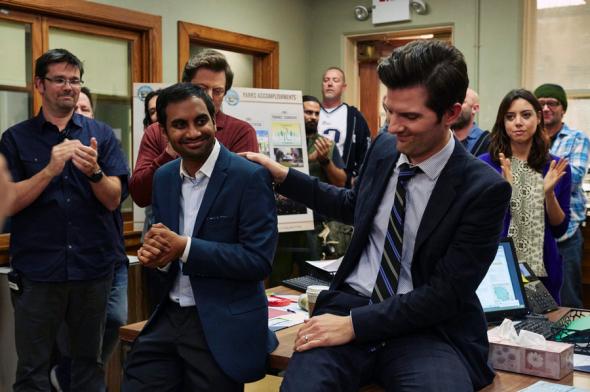 The Death of Hollywood Sexy by Jen Yamato. Yamato looks at just how far sexy in Hollywood has fallen.

Being a fan of Parks and Recreation over the past six years has meant loving a show that almost always seemed on the verge of cancellation. During the early seasons, journalists interviewing creator Michael Schur were pretty much required to bring up the show’s low ratings and ask him to gauge its odds of survival—so much so that Schur eventually began to paint life on the Nielsen bubble as a positive.

We’re still mourning the abrupt end of Agent Carter’s short-lived first season after last night’s finale but, for only eight episodes, it was one hell of a ride. Agent Carter, led by actress Hayley Atwell, took us back to life in New York City after WWII, when nationalism was riding high and international crime was still very much in play. It was a world cautiously embracing peace while the undercurrent of political rivalries was still churning. And in the middle of it all stood a beacon of bravery, feminine savvy, and power – her name was Peggy Carter.

Bar-Hopping With Kyle Chandler: ‘Friday Night Lights’ Star on His “Dark, Evil” Period, Comedy Dreams and Return to TV by Lacey Rose. Rose talks to Kyle Chandler about his future and return to TV.

It’s half past three on the first Thursday of February, and we seem to have exhausted Chandler’s enthusiasm for talking about himself. We’ve been on the topic for the better part of two hours, ever since he blew into The Driskill hotel and suggested we bag our lunch plans and head to the bar: “You didn’t want to eat, did ya?”

Here Are Five Things We’ll Remember Most About The 2015 Oscars by Mike Ryan. Ryan elaborates on the takeaways from this year’s Oscars.

The 87th Academy Awards are, mercifully, now over. Another year of hope was dashed away by a little more than three and a half hours of a dull and, let’s face it, not very memorable show. There was a tribute to The Sound of Music! Nothing against The Sound of Music, but who was clamoring for this? But, in a ceremony that already felt unnecessarily slow, spending time on Lady Gaga’s rendition of “The Hills are Alive” kind of sums up the evening. (Though, it was nice to see Julie Andrews!) Regardless, there were still some moments that stood out for one reason or another. Let’s remember those, shall we?