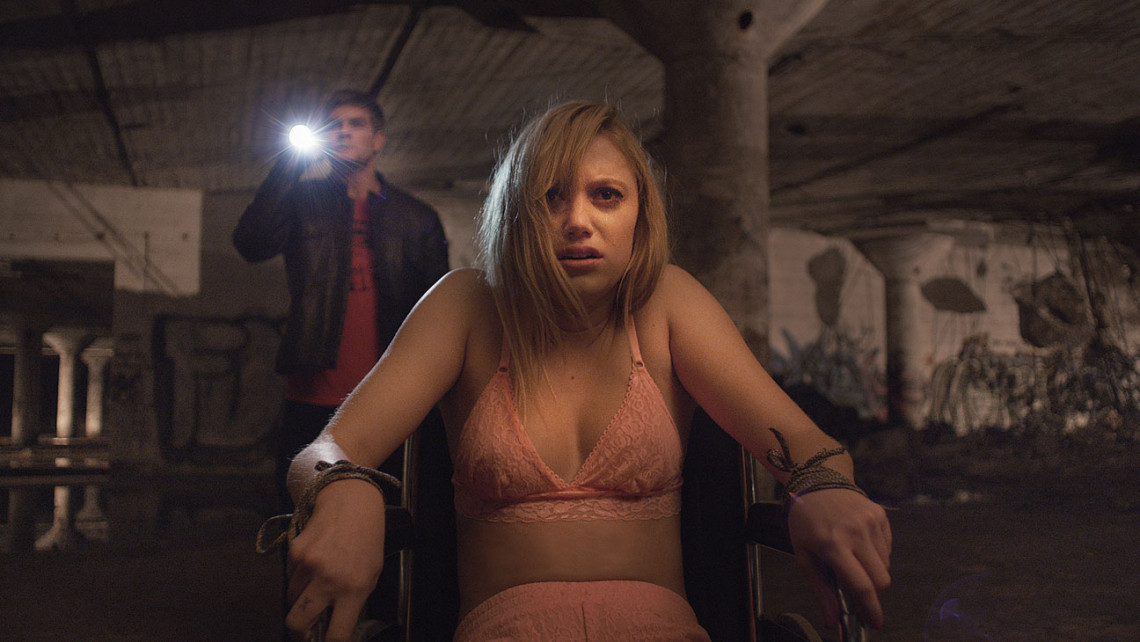 On the Reflective Horror of “It Follows”

On paper, David Robert Mitchell’s supernatural thriller It Follows seems like an odd sophomore effort from the filmmaker who first made his mark, however lightly, with 2010’s wistful teen drama The Myth of the American Sleepover, which trailed a handful of youth as they ambled through metropolitan Detroit in the dying days of summer. Unfairly or not, we tend to think of horror films as an unkempt training ground for more upstanding follow-ups; one doesn’t graduate into them but out of them. It’s a nice surprise, then, that It Follows plays neither as a childlike regression nor an apotheosis into serious filmmaking, but as an evolutionary early step in what ought to be a fascinating career: an impeccably crafted little thriller that’s actually about something, if not too many things. Though it’s nearly as muddled as it is brimming with good ideas, the film is ultimately a savvier position paper on the American late teenager in suburbia than its predecessor—despite its genre’s tendency to proudly stand on the burial site of that very subject. It Follows succeeds as well as it does, in fact, precisely because it’s willing to take a hard look at its generic baggage, subverting the slasher film’s longstanding association with marked and discarded teen bodies to say something about the intense vulnerability of youth, as well as their insuperable and probably ill-fated hopefulness in the face of it. 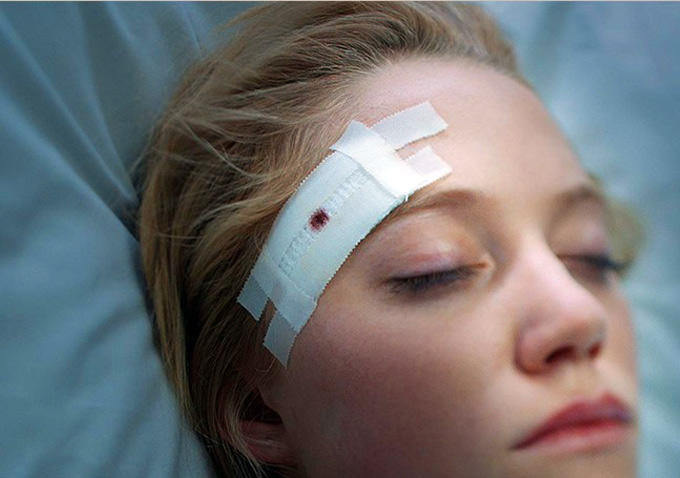 Already used as a symbolically freighted Midwestern all-American girl par excellence in Ramin Bahrani’s woeful At Any Price, Maika Monroe makes a much stronger impression here as Jay, a college freshman in the sweaty-palm phase of her relationship with mysterious jock Hugh (Jake Weary). Hugh’s caginess during an early date turns out to be a foreboding omen for what’s to come when, after they have sex for the first time, he drugs her and brings her to an abandoned quarry on the outskirts of town, strapping her to a rickety wheelchair so he can finally explain himself as she sits captive in the center of the frame. Hugh, it turns out, is just the latest bearer of a sexually transmitted curse, which he’s now regrettably passed onto Jay. Manifest as a slow-moving person of any race, sex, or age who will stop at nothing to get to and presumably kill its target, the curse can only be lifted by passing it on to its next unwitting victim.

Novel as the idea of a monstrous STD roaming through a group of college-age friends might seem—the luridness of that conceit, along with the seriousness of the execution, has probably helped secure the film’s underdog status at festivals as disparate as Cannes and Toronto—it’s not without its antecedents. Though the basic premise might recall David Cronenberg’s much nastier sophomore effort Shivers, you could just as easily trace It Follows back to the mid-2000s wave of American remakes of high-concept Japanese horror films like The Ring and The Grudge, which similarly subject their waif-like blonde heroines to a vengeful specter’s strangely elaborate rulebook. In its suburban setting, aesthetic of slow-burn tracking shots, and penchant for an implacable villain, though, the film is more indebted to John Carpenter’s Halloween and the slasher tradition of final girls outliving their more indulgent peers that it inaugurated—explicitly nodding to its master’s infamous synth score with Disasterpeace’s contemporary stab at the same.

Those reference points aren’t interesting in themselves any more than the punchy elevator-pitch version of the plot is, of course—but Mitchell’s capacity to probe rather than simply recycle them suggests he’s onto something more substantial than mere homage. One is struck, for instance, by how Jay’s new cursed state doesn’t set her off on a paranoid solo quest in the tradition of horror heroines from Rosemary of Rosemary’s Baby to Rachel of The Ring, but rather becomes the earnest occasion for community building, as Jay’s friends and prospective romantic partners come to her side to show a bit of solidarity. Consider, too, Mitchell’s decision to swap the preternaturally smart and virginal Laurie Strode archetype we might expect from his Halloween signposting for Monroe’s all-too-human Jay, whose sexual activeness before the curse is a foregone conclusion and, for the most part, a non-interest. Jay’s moment of exposure, too, is not treated as a punishment for failing to live up to the standards of her scream-queen ancestors but as a sexual assault—the image of her being unceremoniously dumped on the street in front of her home the morning after easily serving as the most discomforting in the film. 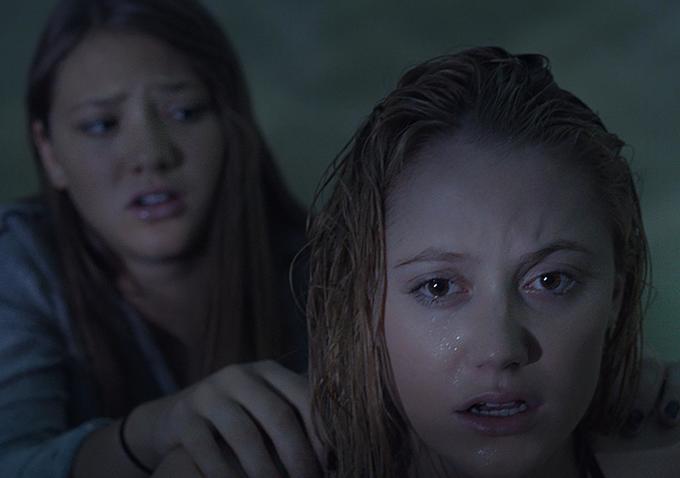 It’s difficult to know exactly what Mitchell is reaching for in that distressing tableau beyond a basic sympathy for the kinds of young women horror films are so happy to consign to the graveyard without a second thought. What’s clear, at least, is that he’s interested in opening up a space between the exploitative demands of the genre, which routinely invites us to take pleasure in the graphic mutilation of young people, and a more reflective account of what it means to be in one those endangered bodies. Hugh’s violent turn, it bears mentioning, immediately follows the closest thing to an outtake from Mitchell’s first film, Jay’s dreamy postcoital monologue about how, as a child, she wanted nothing more than to project herself elsewhere into the future—somewhere north, maybe. The irony that Jay should nostalgically yearn for that freedom to pilot her life while occupying the backseat of her date’s car is surely not lost on Mitchell, who at different points lets his camera adopt the unnerving gaze of the neighborhood boys who creep on Jay’s poolside swims, as well as that of her kind but overeager platonic friend Paul (Keir Gilchrist), who looks at her with sad territorial eyes that suggest he’d be all too honored to take her curse upon himself. These substitutions of the usual slasher film’s stalker-cam for the perspectives of more homegrown and more explicitly gendered threats aren’t empty ironic posturing on Mitchell’s part, but of a piece with his larger project of using the genre to elucidate his characters’ everyday experiences.

Like a lot of good horror films, It Follows loses its way a bit in its closing act, betraying some of its physical rules about how our heroes can engage with their slow-shuffling nemesis and increasingly trading in banal psychosexual horror tropes about the uncanny return of old loved ones as new dangers. More importantly, it fails to consolidate these fruitful digressions about youth culture in extremis into anything like a central point: One certainly doesn’t come away from the film better equipped to tackle the insidiousness of rape culture, for instance; nor does the implicit critique of Paul’s nice-guy entitlement early on make up for his later prominence as a more traditional white-knight figure. Still, there’s an earnestness to the film’s inchoate exploration of what the genre can say about the lives of the young people it’s so fond of killing that impresses as much as Mitchell’s obvious technical chops. If it doesn’t quite figure out where Jay wants to go now that she’s on the cusp of being a grown-up, it’s at least willing to ask the question, and to seriously think about the obstacles in her way.