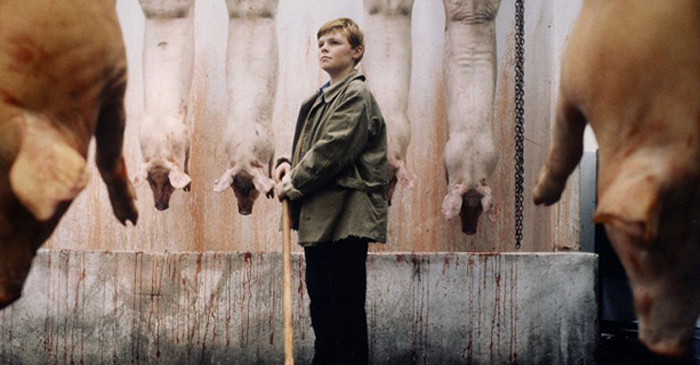 Rarely is digging through a filmmaker’s oeuvre so replete with unpredictability and splendor as the grab bag of Neil Jordan. For a director who has regularly surveyed themes of aberrant sexuality, hometown conflict and religious repudiation within a multitude of genres that range from horror (Interview with the Vampire) to romance (The End of the Affair) to noir (The Crying Game), it is a feat that his films remain so diverse and singular. While his new film Byzantium which stars Gemma Arterton and Saoirse Ronan as a mother-daughter vampire duo has its fair share of strengths and drawbacks, it fits aptly into the idiosyncratic canon of the Irish director and author whose steady outflow in the past three decades has rarely lost its luster.

The nineties was Jordan’s most fruitful period, cresting the waves of his two biggest hits, the consecutively released The Crying Game (1992) and Interview with the Vampire (1994). The latter, a fetching adaptation of Anne Rice’s novel, is equal parts elegance and camp, a 19th-century paleapalooza engorged with the most androgynous male cast of the moment. With Tom Cruise, Brad Pitt and Antonio Banderas all lunging to outdo each other in coiffures and lipstick (not to mention an unstoppable breakout performance by a pint-sized Kirsten Dunst), its success is a no-brainer.

The former, however, is an inexplicable coup. The Crying Game is a defiant, groundbreaking original unlikely to be made even today. On the surface a stark crime story, it emerges as one of the most harrowing and complex romances in mainstream cinema. The Crying Game is notorious and often parodied for its genuinely startling twist, but it’s a testament to the film’s abundant thrills that the big moment occurs only halfway through.

Jordan’s two biggest hits are the best representation of how the fluctuating scale and scope of his filmography does little to crook the throughline of emotional and character resilience. The Crying Game, for which Jordan won a much-deserved Oscar for Best Original Screenplay, is a modern-day cop procedural anchored by the potent love affair at its center. Interview with the Vampire is a gargantuan spectacle that weirdly humanizes its over-the-top fang bearers within the garish world of Jordan’s vision. This high-wire balance of small-scale grandiosity is never more well attuned than in the criminally under-seen The Butcher Boy, an exhilarating coal-black comedy about the birth of a sociopath in 1960s Ireland.

The sporadic wit in Jordan’s work is often overshadowed by the larger more dramatic elements in play, but in The Butcher Boy is in full blaze even before the opening credits roll. A luau-bar rendition of “Mack the Knife” plucks away over comic book frames of war and superheroes steeped in crimson. The song, a cheery account of a serial killer, is the perfect gateway to Jordan’s exuberant 1997 adaptation of Patrick McCabe’s novel in which young ginger-haired Francie Brady systematically succumbs to his volatile surroundings and becomes a full-scale terror in his provincial town.

When we first meet Francie, we don’t actually see him. He’s held up in a hospital bed, in an indeterminate future, confined within a full body cast with only a hole for sight and a slit for food and beverage disposal. Though he’s rendered immobile and therefore harmless, the sight of that eye peering out from beneath the mold is instantly chilling. A calamitous force of nature lying dormant. Cheeky narration from adult Francie guides us through his shenanigans prior to his hospital stay – and through his slow retreat into a treacherous fantasy world – beginning harmless enough as he and best friend Joe Purcell reenact television broadcasts of cops and criminals, cowboys and indians, and invading space aliens. While the well-adjusted Joe is only playing, Francie is, whether consciously or not, escaping a turbulent home life.

Francie’s sweet, suicidal mother is helpless to medication, which soon admits her to a hospital (amusingly referred to here as “the garage”, as if she were a car that needs tuning up), while his abusive, bleary-eyed father (the sublime Stephen Rea, a Neil Jordan fixture) is perpetually drunk and irate. The reprehensible mistreatment of Francie throughout The Butcher Boy, which includes emotional and social neglect, physical abuse, forced electroshock therapy, and near molestation by a Catholic priest, is regularly undercut by bouncy carnival music and adult Francie’s blithe perspective on disturbing events. Looking back on his sloshed father whipping him relentlessly with a belt, adult Francie marvels, “He was the best drinker in the town!”

Francie never faults his father (or, as he’s referred to here, “da”) for such heinous behavior. His admiration and loyalty doesn’t diminish. When his father angrily puts his foot through a malfunctioning television set, Francie initially reacts with disbelief and then soon shrugs, as if in that moment interpreting and accepting this crazed act as an appropriate answer to shoddy workmanship.

As the Cuban Missile Crisis unravels and Communist encroachment becomes more threatening, television images and radio broadcasts of potential nuclear war abound, eventually extinguishing the line between fantasy and reality to the impressionable Francie. Visions of mushroom clouds and deformed alien heads atop human shoulders haunt him. He is even paid frequent visits by a foul-mouthed Virgin Mary played by, in a most inspired casting choice, Sinéad O’Connor.

Francie’s growing, inexorable rage is funneled into targeting the ornery Mrs. Nugent (a superbly uptight Fiona Shaw), the mother of a bespectacled schoolboy whom Francie bullies. Mrs. Nugent’s cries of “Pig!” to Francie and his family only provide the boy with further ammo to shake her up. After she sics her two adult brothers on Francie to avenge a lashing he unleashed unto her son, Francie shows up on her doorstep, snorting and gnawing on her welcome mat. Tossing him off the property won’t keep him away for long, as he returns later to, in true pig-like fashion, defecate on her well-kept carpet.

The embodiment of Francie by newcomer Eamonn Owens is nothing short of a fireball. He torches every frame with uncompromising confidence and an intense, knowing interpretation of this particular blot on society. He charms and intimidates throughout, sometimes in a single scene, and even culls sympathy in the brief moments when the tatters of Francie’s life become lucid.

The Butcher Boy, by far Jordan’s funniest film, elucidates its devilish protagonist much in the vein of Stanley Kubrick’s A Clockwork Orange. The majority of Jordan’s film, in fact, could be viewed as Alex DeLarge: The Early Years (an ingenious placement of “William Tell Overture” only cements the kinship). It’s more a savvy deconstruction of a violent psyche than reveling in cruelty, which makes the outbursts of bloodshed that much more of a jolt. Like Alex, Francie is lobbed around to different institutions of rehabilitation, all of which fail to suppress the monster within. Francie always finds a way back home, and pig inevitably becomes butcher.

Jordan’s films are sophisticated without being stuffy. It is, in fact, stuffiness that Francie is railing against. He is a beacon of charisma and eventual chaos in this otherwise docile town, in which women are fearfully glued to their radios as they listen for news of impending war, while men guzzle booze and slump in their armchairs. There are loonies on the outside, all of middle age or older, but their ravings (which Francie often repeats with matching fury) appear to be ignored and rendered harmless by the townsfolk. Francie too is underestimated, even when his menace becomes increasingly more focused.

Jordan, an author of fiction himself, makes inherently novelistic films. They are strikingly rich and textured without ever feeling cluttered the way film adaptations of novels ordinarily do. He’s reminiscent of the great Hal Ashby; an established director whose name is prone to slip from memory, but whose work is risky, bold and everlasting.