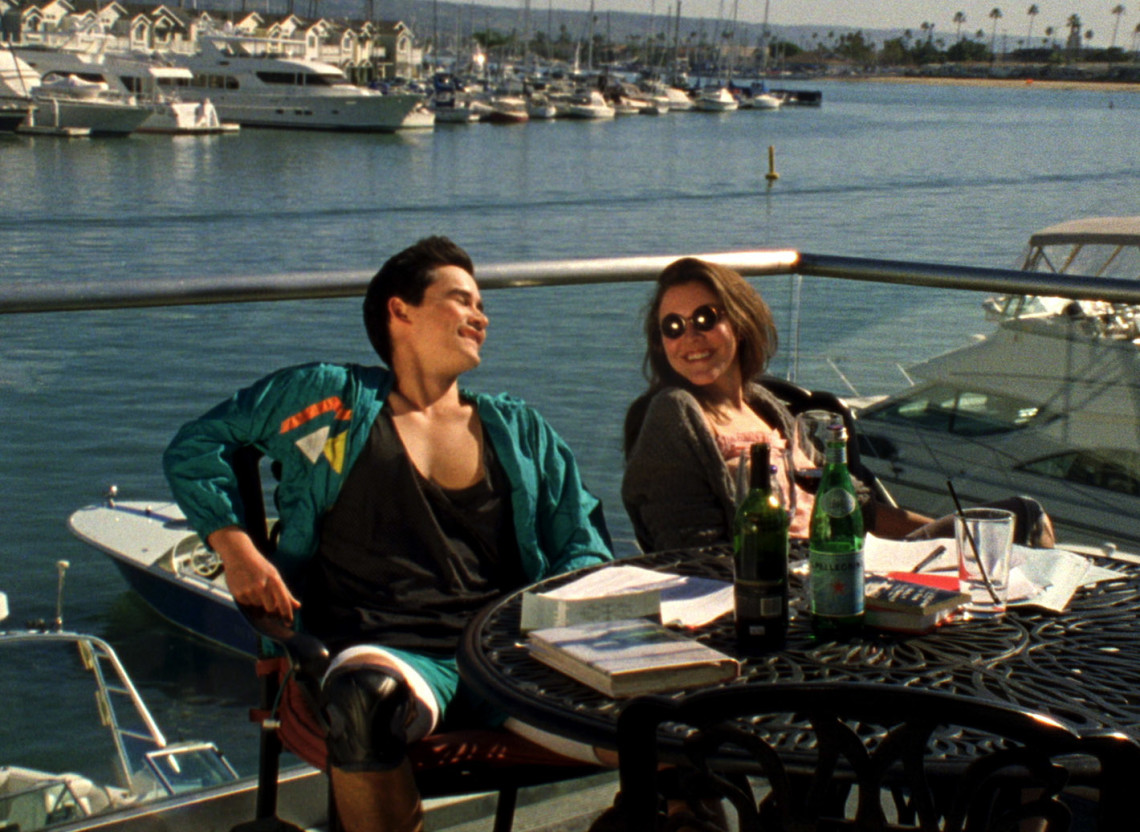 This Week on Mubi: “L for Leisure”

Though American independent cinema has never been more stylistically or creatively diverse, the term “indie” can immediately conjure a hyper-specific image of twee characterization, overwhelmingly white casts, and self-conscious dialogue. So ingrained is that image that as many parodies of the style have proliferated as straight takes, to the point that they can rarely be separated from what they spoof. But there’s never been a movie quite like L for Leisure, which follows a loose vignette structure while vaguely resembling “Miami Vice” episodes as shot by a prepubescent Whit Stillman.

Stylistically, the full-frame, low-quality film format could pass for a sedate project from Harmony Korine, albeit one that swaps out freaks for geeks. Tracking and splintering off with various gaggles of graduate students on break, L for Leisure unites its disappearing and reappearing characters through their camaraderie as put-out TAs and their awkward inability to have conversations outside of academic stiffness. These young adults definitely fit the part of grad students: hairlines gird themselves for coming erosion, skin looks distinctively unexposed to prolonged sunlight, and everyone wears ruffled clothes that may once have seemed fashionable but are now the only things left in closets that have not disintegrated from frequent wear. People at a lake house sit around in mismatched swimwear as if they want desperately to look normal but haven’t the faintest idea how to do so, adrift without some thesis to argue.

Everyone speaks as if they learned English from a combination of ironic t-shirts and semiotic theory. Offering someone a drink, one boy asks “Want some of my Snapple?” in a tone that suggests he’s in a commercial only he knows about; elsewhere, Sierra (Marianna McClellan), a woman studying post-apocalyptic literature, casually defends her choice of subject as a fantasy of our banal present and an inspiration for politicians’ doomsday rhetoric. The dialogue is endlessly quotable, with everyone’s staccato, distanced delivery—never a conversation so much as a linked series of pronouncements—perfectly separating out lines like “What’s the Kronos Quartet?” or “I’ll be Swatching you” for context-free use.

It’s important, though, to remember that despite their eerily formal dialogue, these characters are a bunch of kids, and much of their mental faculties are devoted to the scatalogical and Dionysian, as in talk among some girls about soaking tampons in vodka as a means to get drunk without drinking. The esoteric knowledge on display also does not preclude great ignorance of more important matters, consistently presented in visual and spoken juxtapositions between social ills and the students’ ignorance, whether it’s flyers for an “AIDS dance” strewn around a tennis court where some work out or a discussion of the Rodney King riots that is abstracted to the point that some (white) students look forward to it while others interrupt to offer ice cream.

The insularity of these people is stressed at every point, up to and especially the fact that the film was shot on actual film. The soundtrack, by John Atkinson, is an amalgam of contemporary chillwave and throwback Tangerine Dream clusters, a half-sinister, half-wacky approach that compounds the idiosyncrasy of the movie, and how even this thorough parody of indie tropes can nonetheless be so distinct from its peers. It’s hard to expect much from a film whose first on-screen credit is for the production company “Ball Deep Int’l,” but L for Leisure is one of the highlights of a general boon period for indies. As much time as the film devotes to mocking grad students for their absurdly obscure fields of study, though, there is also a heart under all this affectation, one attuned to the difficulty, even among people with advanced vocabularies, to articulate desires. Self-awareness and obliviousness occupy the same ungainly space, epitomized when one boy displaces his nervousness with a girl by saying, ”I’m always down for a strong make-out sesh, but sex is something I hold onto,” and she responds “I admire that” while slapping his knee with forced chumminess. It’s a moment of excruciatingly awkward comedy, yet it’s slightly tragic, a moment of two people recognizing each other’s weaknesses as their own and parting uncertainly before they share even more.

If you’re interesting in watching L for Leisure on MUBI, use your Movie Mezzanine coupon for an exclusive discount and access to a breathtaking library of cinema!