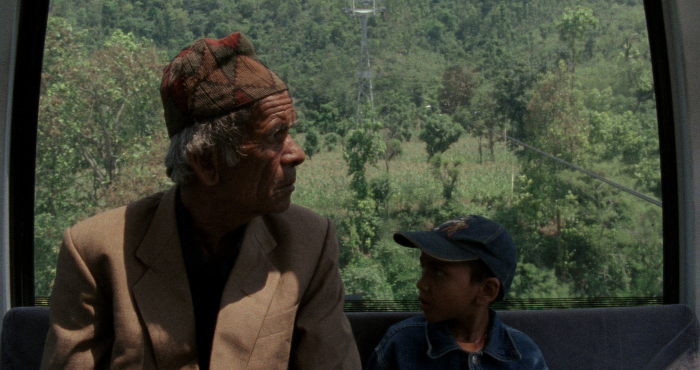 The creative folks working over at the Harvard Sensory Ethnography Laboratory have outdone themselves once again. After last year’s Leviathan and 2009’s Sweetgrass, Pacho Velez and Stephanie Spray introduce Manakamana, another eye-opening documentary that flirts with brilliance. A real-time journey of personal interactions, Manakamana is also steeped in heavy silences and spiritual reverie. The documentary achieves a transcendental state of being as its figures also communicate with the landscape and the remnants of the past that surround them. An intimate portrait of people coming and going, Manakamana exists as a stunning blend of life’s grand and monotonous movements.

The documentary’s stationary gaze follows a rotating group of pilgrims making an ancient journey in a state-of-the-art cable car. High up in the jungle of Nepal, their collective destination is the Manakamana temple, a place that we never see due to Velez and Spray’s intention of capturing the eclectic encounters of those making the journey. Young and old, male and female, the occupants  vary in age, race, and ethnicity. Their moods range from relaxed, excited, cheerful, calm, and jubilation; most appear as if they’re making the trek for the first time, while others sit back and stay wordless while the camera lingers without judgment. The sacrificial goats that make the trip are pretty quiet too. We start with an old man and a boy, whose wordless interaction paves the way for Manakamana’s unique conveyance.

The film’s formal prowess, both in its limited point of view and quiet reverie, may come across as being too stubborn for some. There is literally no dialogue spoken until the 25-minute mark: three elder women, who at first sit silent, break into an on and off chatter about how the current times seem better. They reflect upon the past with a keen remembrance of their struggle. “There were no houses, now they’re everywhere.” The window into modernization is subtle, private even, but stands as a key theme in Manakamana. The homes and villages that lay beneath the gliding cable cars are new, tin roofs have now become replaced with slate. “Everything is well made, it’s so nice now,” one of the women says.

We eventually move onto a trio of male twenty-somethings, each donning black shirts, with hair extending past their shoulders. They snap pictures while becoming enamored with the “amazing hills” around them. The high altitude has caused their ears to pop. “It would be nice to have a painting of this,” one remarks, offhandedly tapping into the genius of Manakamana’s functionality as a breathtaking recording of people living and existing among such beauty. Birds chirp as the cable car rumbles high up in the air. It’s a journey of sedated exploration, one that becomes increasingly rewarding with each new face; each new life placed in front of the cable car’s window.

While Leviathan traversed through all quarters of its ship and the sea, Manakamana is wholly fixated upon a different kind of experiment: the experience of remembering and forgetting; the stillness of an essential truth that materializes through the film’s countless faces and interactions: two younger women make affecting small talk after a 4 minute silence; melted ice cream slowly streaming down the hand of an elderly woman; two older men talking about “life before the cable car,” a short conversation that tails off as they strum their stringed instruments. Manakamana’s aesthetic is one of stationary complacency, charting the little moments in between our daily destinations. Journeys are made and wishes are fulfilled. Our tiny legacies live on even when the camera turns off.