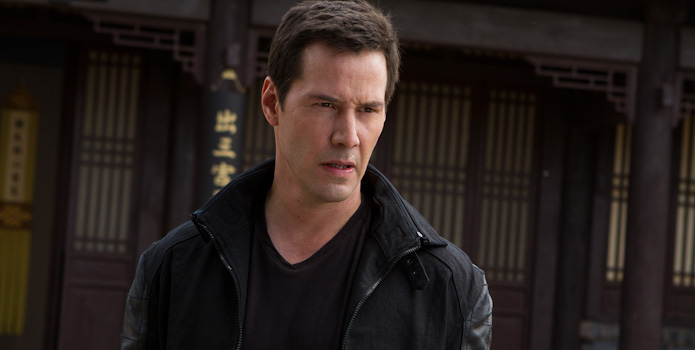 Now far removed from the Matrix franchise, actor-director Keanu Reeves makes his directorial debut with Man of Tai Chi, a surprisingly spry and swift B-movie that never quite gets beyond its core concept to become more than the sum of its parts. As a battle between the traditional and the modern, Man of Tai Chi is part Fight Club, part Truman Show, a dim culture critique steeped in an unwavering brutality that is shown but never truly felt. While Reeves exhibits natural talent behind the camera, his debut carries an austere coldness that shuts out any semblance of diverting pleasure.

The no-nonsense narrative centers on Tiger Chen (Chen Lin-Hu), a young and skilled martial artist torn between honorable methods of meditation and the highly lucrative world of underground fighting. Mentored by Tai Chi Master Yang (Yu Hai) on the importance of melding power and spirit, Tiger possesses the ability to transform himself into an elite warrior. He’s eventually plucked from his low-paying delivery service job and into the hands of Donaka Mark (Reeves), a wealthy security adviser who hand-picks new contestants for his profitable network of death. Tiger must fight against other trained martial artists, warriors and mercenaries before he becomes the hunted. Karon Mok plays Sun Jingshi, a police officer looking to bring down Mark’s lethal and elusive business.

Though Man of Tai Chi is heavily repetitive and familiar in regards to Tiger’s predictable arc, the action choreography on display is tight and controlled. Obviously influenced by the Wachowskis, Reeves presents a discernible spatial fluidity in his editing; the punches and kicks land with fury as he chooses to forego any further weaponry. Tiger becomes entangled in this thinly realized world of kill-or-be-killed combat, and the punches and kicks do hit with force, but it’s mostly all for nothing as Tiger loses his way before coming to his senses. Reeves, while more than a little impulsive in offering up some stylistic flourishes behind the camera (odd camera zooms, weird visual graphics, and a throbbing soundtrack), is truly awful as Mark – a God-like villain mostly shacked up in his shadowed lair of darkness, he grunts, laughs and yells with odd delirium, showcasing once again his limited onscreen presence.

As a routinely flawed genre entry and love letter to martial arts, Man of Tai Chi’s accessibility is mostly achieved via Reeves’ earnest attraction to the subject. Michael G. Cooney’s frugal screenplay may work for some, but its meagerness only lasts for so long. Still, if Reeves further develops a niche for putting out relatively cheap and small genre outings, he could carve out a decent career for himself behind the camera. While at times it feels like he’s willing to offer up a darker take on the material, Man of Tai Chi’s unwillingness to shift out of neutral stands as its biggest fault.