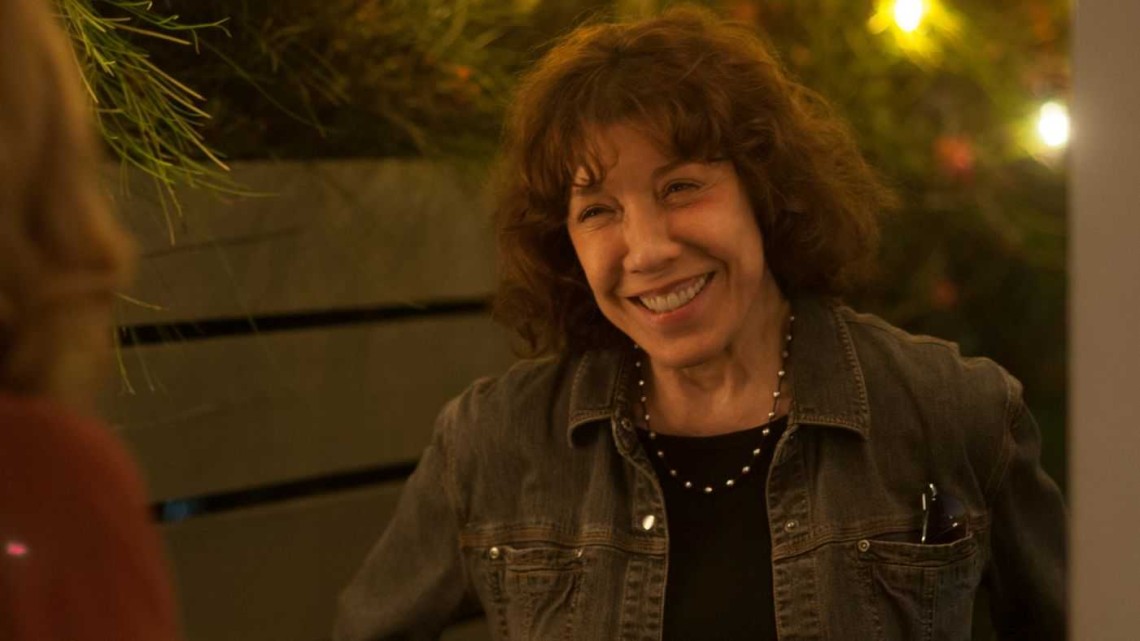 On The Enduring Strength And Subversion of Lily Tomlin

“I see these stiff, inhibited women,” Lily Tomlin told Time Magazine in 1977. “Uptight, uncertain, thwarted.” She was describing the audiences of her live performances. She saw repression everywhere—this discomfort within women externalized in their very body language. She had seen it in the women of her childhood in Detroit, where the only option was, she said, “to be exceptional or be married.” In 1975, Time had declined to make her their cover story when she refused to allow them to out her homosexuality. Two years later, after her film debut in Robert Altman’s Nashville and the persistence of her stage work, she was too big to ignore. Therefore, Time crowned Tomlin as the ‘New Queen of Comedy’ in 1977, yet she still had to invite the public into her life and skirt the issue of her romantic and creative partner, Jane Wagner. They “share a house,” Time said of the couple. There was then—as there remains today—a collective resistance to difference that is too taboo to be confronted with direct words.

When Tomlin used straightforward language, as when she told Johnny Carson about her disinterest in bearing children, she shocked her audience into uncomfortable silence. Therefore, her body and timbre became—and remain—her subversive vessel of resistance, delivering through posture and vocalizations what Jennifer Reed, a frequent Tomlin essayist, calls the promise of “polysemic possibility”—the daring suggestion that a woman can be visible without being inhibited. Tomlin has been known for decades as the creator of countless characters, but in her performances, in her tarnished brass voice and the space she claims, she demands something deeper. 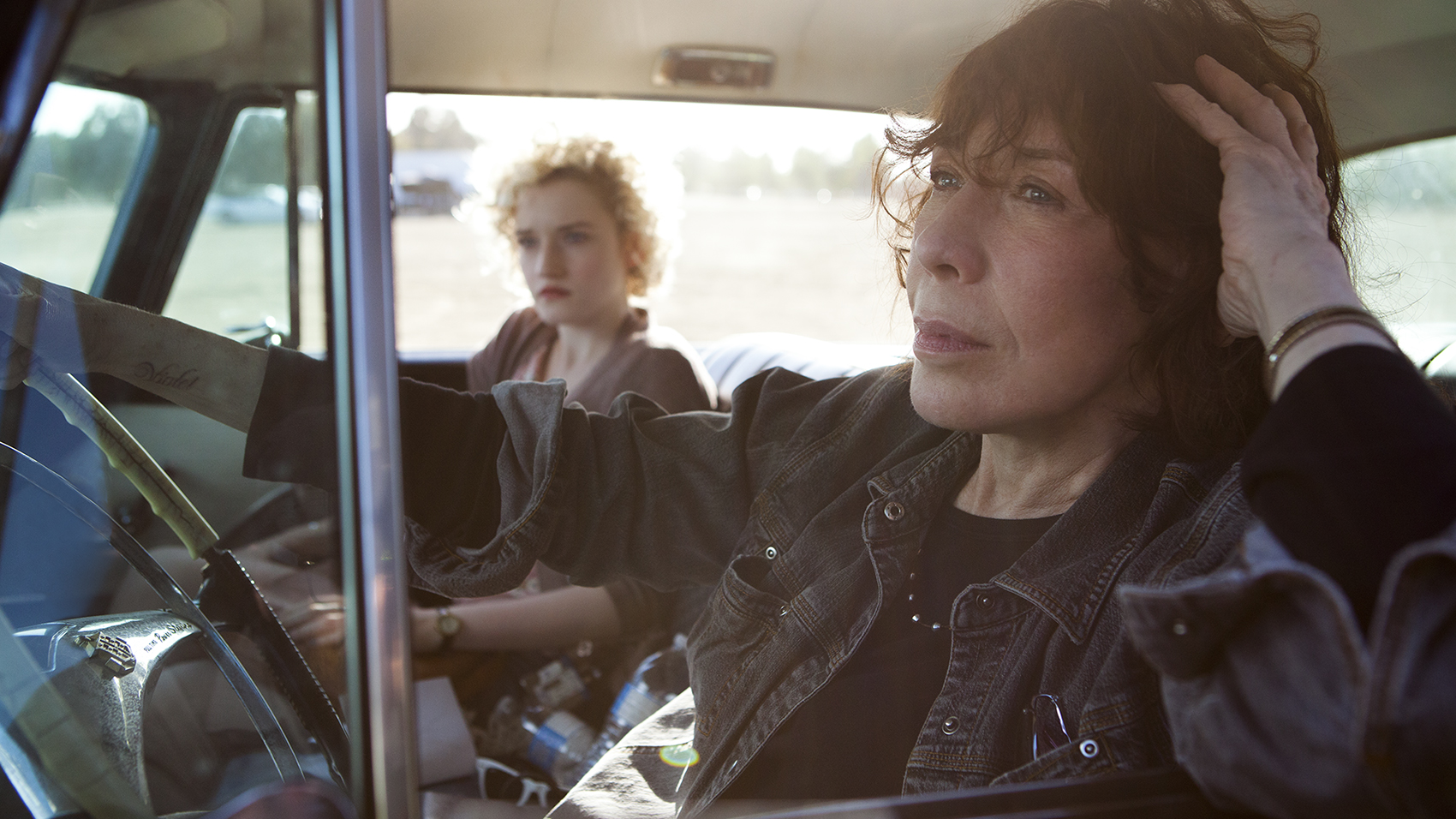 Tomlin can be seen in cinemas currently as the acerbic, Dodge-driving spitfire at the center of Grandma, where a single day’s hunt to fund her granddaughter’s abortion becomes a journey through the title character’s own sins and grief. The part was written with Tomlin in mind and represented a chance for the consummate performer to work her textual resistance while normalizing and de-marginalizing abortion access and reproductive choice (as Obvious Child did last year). Tomlin is a performer capable of operating by herself onstage for hours at a time, yet director Paul Weitz and editor Jon Corn isolate her within quick, unconfident takes that neuter the margins in which her performance might otherwise breathe. Tomlin is too interesting to ever not be compelling, but the film never grants her enough room to explore the realms of spontaneity, or the illusion of such.

Maybe the best choice the film makes is dwarfing Tomlin with a black Dodge Lancer. This is the actress’ personal car and, in addition to earning a mention in that same 1977 Time feature, it exerts its own sense of space. Its architecture reflect its owner’s refusal to be thwarted. Along with her Emmy-nominated role in the surprisingly low-stakes Netflix series Grace and Frankie (which seems at times to be a documentary about Sam Waterson and Martin Sheen earning paychecks), Tomlin is enjoying a moment of deserved onscreen visibility, even if both performances are best seen as signifiers of her stronger work.

In The Queer Feminism of Lily Tomlin, Reed describes how the actress uses her own body as a subversive tool. From the beginning of her career, with her face and limbs bent hard as the malevolent switchboard operator Ernestine on the television sketch series Rowan and Martin’s Laugh-In, Tomlin infiltrated the castle of normativity. Tomlin, Reed says, “seeks to contest the meanings made available by hegemonic discourse.” Across six network television specials from 1973 to 1982, and countless stage performances over more than three decades, Tomlin used comedy to comment on that social dialogue. Ernestine was so popular that schoolchildren quoted her catchphrase, “One ringie dingie. Two ringy dingy,” and Tomlin rejected a $500,000 offer from AT&T to portray her in advertisements. This was the era of Ma Bell, of the monopolistic phone company, and Tomlin became famous by undercutting it. On stage, her characters hailed often from the regions of the marginalized or vulnerable. Crystal the Terrible Tumbleweed was disabled. Sister Boogie Woman was elderly and homeless. Tomlin became famous to another generation for portraying a child, appearing as Edith Ann on Sesame Street. She frequently portrayed sex workers, notably in The Search for Signs of Intelligent Life in the Universe, working from a script by Wagner. These were critiques not of the disabled, but of ableism; not of sex work, but of those who would otherwise portray sex workers as victims or criminals. And the critique continues in Grandma, where Tomlin’s strongest moment comes as, sitting in a place where abortion can be delivered legally and safely, she recalls the “dark ages” of her own illegal, painful procedure.

“She takes up space,” Reed says of her in her essay “Lily Tomlin: Performing Nitely.” “She moves in space, she sees, she looks back, she is loud.” Tomlin’s first openly gay role came 30 years into her career with Franco Zeffirelli’s period drama Tea With Mussolini, in which Italian fascism inconveniences the luncheon schedule of aging British dilettantes. Cher chews the drapes and leaves compelling teeth marks. And all Tomlin has to do is put her hands in her pockets. Credit should be given to the film’s costume designers, who outfit her in oversized suit jackets and men’s shirts. The costuming allows the angle of her elbows to tell volumes about repression. Tomlin chomps cigars, woos young women, and beats up soldiers. But it’s her body language, compounded by the relaxed weariness of her face, that tells us everything. Even as fascism swarms over Italy, Tomlin’s posture seems to say that she has been defiantly different than what she had been expected to be for too long to get defeated by something insignificant like a global war. Her elbows speak volumes, just as they did in her portrayal of Ernestine decades earlier. They extrude in defiance of the same space she feared wasn’t open to the women she had seen in her audience in 1977. “Her characters,” Reed says, “create lives in a culture that does not want them to be who they are.” It is a culture where a woman with a personality is always kind of a subversion, let alone one who, as she told David Letterman in 1985, builds a theatre into an abandoned storefront just to house her own performances.

Even some of Tomlin’s failures or lesser roles reveal the impatience lurking just beneath her surface. In 1978, the newly minted “Queen of Comedy” appeared as a romantic partner to John Travolta in the interminably terrible Moment by Moment. And although Tomlin exudes palpable boredom, her apathy at sharing the screen with America’s supposedly charming man-crush is perhaps a rebellion in and of itself. After her iconic appearance in 9 to 5, Tomlin joined Steve Martin in All of Me. Tomlin is relegated throughout to a disembodied presence trapped in Steve Martin’s brain. But All of Me achieves accidental sexual subversion when Tomlin, playing an otherwise feminine heiress trapped in a man’s body, must be convinced about the erotic potential implicit in making love to a woman. Tomlin’s strength lies not in her selectivity or in the consistency of her performances, but in the endurance of her presence right there at the border of the Rubicon.

Her film career has seen perhaps the opposite trajectory of many of her contemporaries, gaining weight with age, puffing along in defiance like a Dodge Lancer. Compare her to Goldie Hawn, who, like Tomlin, debuted on Laugh-In in the late 1960s. Hawn’s stardom came immediately, and rode strong for nearly 20 years. But Hawn has also not appeared on screen since 2002. From the minute she appeared onscreen in the final week of 1969, Tomlin was famous. But she was never burdened with ‘It Girl’ status, and her presence was never contingent on her ability to maintain her own stardom. The same year as her Time cover story, Newsweek would say that it was precisely her lack of superstardom that allowed Tomlin to be more heroine than cipher. The calcium-sulphate of her surfaces came pre-scratched, already baring chips and chalk dust, a defiance of blank slate stardom that has only grown more firm and accomplished with time.