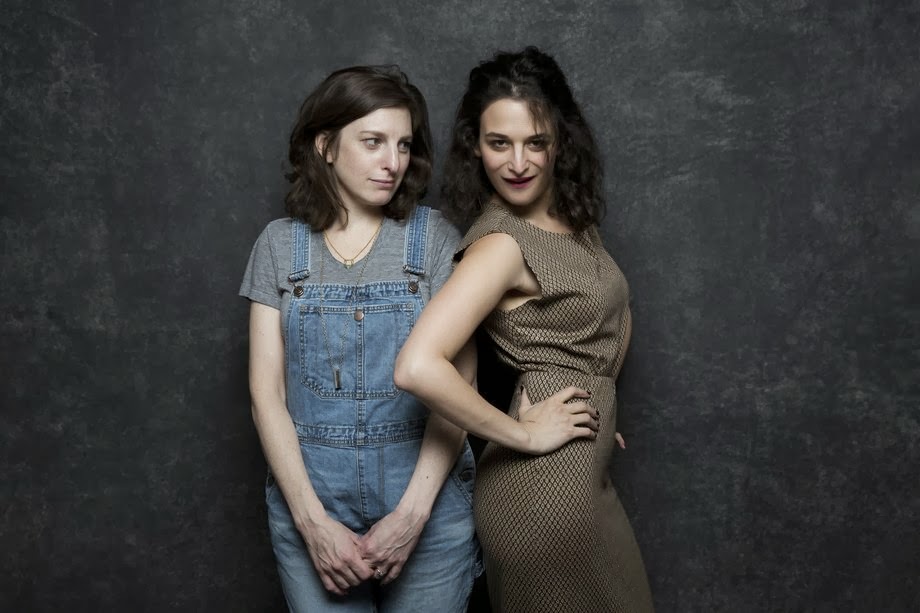 As fun as the summer movie season can be, it can get pretty overwhelming with its abundance of sequels, franchises and big-budget blockbusters. That’s why Obvious Child, the feature-film debut from director Gillian Robespierre starring the adorable Jenny Slate, commonly known for her supporting role as Mona Lisa in Parks and Recreation, is such a delightful surprise. An indie comedy that manages to be as poignantly sweet as it is hilariously raunchy, which tells the story of Donna, a struggling stand-up comedian who’s been recently dumped by her boyfriend and rebounds by spending a night with the clean-cut Max (Jake Lacy) resulting in an accidental pregnancy.

I was fortunate enough to sit down with Gillian Robespierre and Jenny Slate with fellow journalists, Brett Michel from The Improper Bostonian and Ken Murray from IWantMyTwoDollars.com to conduct a round-table interview about their new film, which tackles considerably taboo material from a funny, insightful and refreshingly feminist point of view.

How did you go from adapting the original short film into a feature film?

Gillian Robespierre: We started as this little story in 2009. We shot in four days in Brooklyn with no money and no real wardrobe. All of the crew members were friends of mine from the visual arts school that I went to on 23rd street in Manhattan. We were all in our mid-twenties, so nobody had a real, full-time job, and we were all able to shoot this movie. And what was exciting was that in the editing room I noticed that there was something special in Jenny’s performance. It was incredible, and I ended up having a thirty-minute rough cut for this sixteen-page short. So I thought, “If I only had a little bit more money, and about fifty more pages in my screenplay, this could be a story told in a feature-length film.”

But we didn’t have that yet, so I edited the film, cut it down to twenty-minutes, which is not incredibly short for a short film. We got into some festivals and got discussed on my favorite blogs, such as Feministing, Bust, and Jezebel. They wrote really amazing things about the performances, as well as the themes that we explored in the film, and they linked our short film to the articles, which was amazing considering that shorts don’t usually get that sort of coverage. And it did really well, which was really inspiring and exciting for me to turn it into a feature. I saw it in the editing room, I just didn’t have the story or the footage yet, but I’m glad, because we all had to mature as storytellers and creators.

What I loved about the film is that it tackles abortion in such an intimate manner. Did you face any difficulty getting the film launched due to this subject matter that could be considered a hard sell?

Gillian Robespierre: This is a really boring answer, but no.

[Laughs] That’s awesome! I’m so happy to hear that.

Gillian Robespierre: Yeah, it’s so refreshing for critics to hear that and be like, “Really?” Making independent films, finding financing is super hard, and almost impossible to be a part of that percentage of people who do it and get the chance to do it. But, we worked really hard in developing the story and the script, and I think when we finally felt like we could get it into the hands of people who would finance a low-budget, independent feature, they were really excited to see Jenny Slate being in a movie like this, and they were really excited by the story, and not too many doors were closed on us.

Jenny Slate: Yeah, and the most important thing for me is that you treat your material thoughtfully, and we tried to be thoughtful about the topic. There’s nothing in the movie that says it’s a throwaway for Donna to make this decision. It was really important for us to say that the decision is clear, but that never means that it isn’t complicated.

Gillian Robespierre: That’s why we get annoyed when journalists write about it as if it’s, you know, an “abortion comedy”, ‘cause we feel like it’s a little bigger than that.

I apologize if I made it seem that way.

Gillian Robespierre: Why, was that you?

Gillian Robespierre: [Points to the door] Get out! No cheese for you!

(To Jenny Slate) Your character tells a room full of strangers about having an abortion, which must be extremely difficult for her. What’s the most embarrassing thing that you’ve ever said on stage?

Jenny Slate: The only time that I’ve ever come off stage embarrassed was when I had stage fright for a little while, and in those times it was really hard for me to be open because… They weren’t really anxiety attacks, but much like the ways that we prepared for the stand-up in the film, before I go on stage I’ll have a notebook and I’ll write, “Growing up, Milton (her hometown), Dad, Dad’s bike, barbecue grill, fire in the woods”. All of these stories that I want to tell and it creates a flow, a pattern, so I’ll go on stage and I’ll just have those bullet points, but because I was doubtful of myself and the people that I was speaking to, I was unable to create the webbing in between that is so important. Those were the times that I was the most embarrassed.

It seemed like a good amount of the dialogue in this film was improvised. Do you feel that if dialogue stays strictly to the script that it comes off less naturally?

Gillian Robespierre: I think that’s a real compliment to the actors and the writers on the set. There was a script, but I am not married to my words, and when I’m working with actors such as Jenny Slate, Gabe Liedman, Jake Lacy, Richard Kind, Polly Draper and David Cross among others, you want to work with them because they’re so good, so smart and so funny. Being open to their perceptions of their characters is fascinating and you have to let them be free. That’s what filmmaking is, and it’s a true collaboration. It was a joy to watch every single one of these actors take what was on the page and make it feel so authentic and funny.

Jenny Slate: The style of Gillian’s writing is really true to a type of vernacular and when she wrote the movie, I felt that she paid very close attention to the way that people actually speak. And that scene where Donna goes to Plan Parenthood and the doctor says, “Hi Dawn”, and she has to correct her by saying “It’s Donna”… To me, that’s a really, really important scene in regards to the film tonally, because it’s completely original and it’s so small that a person who wasn’t smart might even cut that out, saying something like, “Just get to the scene”. But that is the scene, and it’s so funny that it seems like it’s something that could be improvised, but it isn’t, it’s just very thoughtful.

And then there were times where someone would say, “I actually just don’t think my character would say it like that”, or, “I feel like this needs to be chopped up more”, or “We’re missing a step, I just don’t know what it is yet”, Gill would feel confident enough that she would allow us to [laughs] kinda mess with her shit a little bit, watch us, and then say, “Okay guys, this is what you should do”. So there was enough room to play, but with supervision.

Was there a lot of rehearsal time?

Gillian Robespierre: I love rehearsing. We did a lot of rehearsing on the short surprisingly, but with the feature film, there was basically no time. One day we won a grant from the San Francisco Film Society that flew us all in to San Francisco, and we had one day in the Presidio, which is this really pretty park. We did a table read in the morning, a hike in the afternoon, and then work shopped all of the comedy, which is basically where a lot of the comedy was born.

We made a little mock stage, set up chairs, and both Jenny and Gabe got up and did routines while I recorded it all. And then I went home and cobbled together a bit based on that afternoon. Some of it was already written into the feature, some of it was fresh from Jenny’s brain the day of, Gabe lent us some of his comedy, and that was basically the only time we rehearsed, apart from right before we yelled action and were setting up the lighting on the set.

How does it feel that people are saying this could be your breakout role?

Jenny Slate: That’s cool, I guess. [Laughs] I mean, when I think about the actresses that I really admire and the performances that stick in my head, most of them are a lot older than I am now. So if this film helps me to get more interesting parts, I’ll gladly welcome that because it’s all I’ve ever wanted, to be a real movie actress. But when we made this film I walked away feeling very complete and saying to myself, ‘I just made a really close friend (Gillian), I’ve just done a lot of things that I thought I could only fantasize about in terms of performance, and I learned a whole lot’, and that’s a really complete thing for me. So I think that it’s important for me to stick to that, to just stick to my own shit and keep my blinders on, but that being said it is important to have a good seat in my community, and I hope that I can have a really long career, like someone such as Ruth Gordon, who’s from Quincy, MA, which is where my Dad is from.