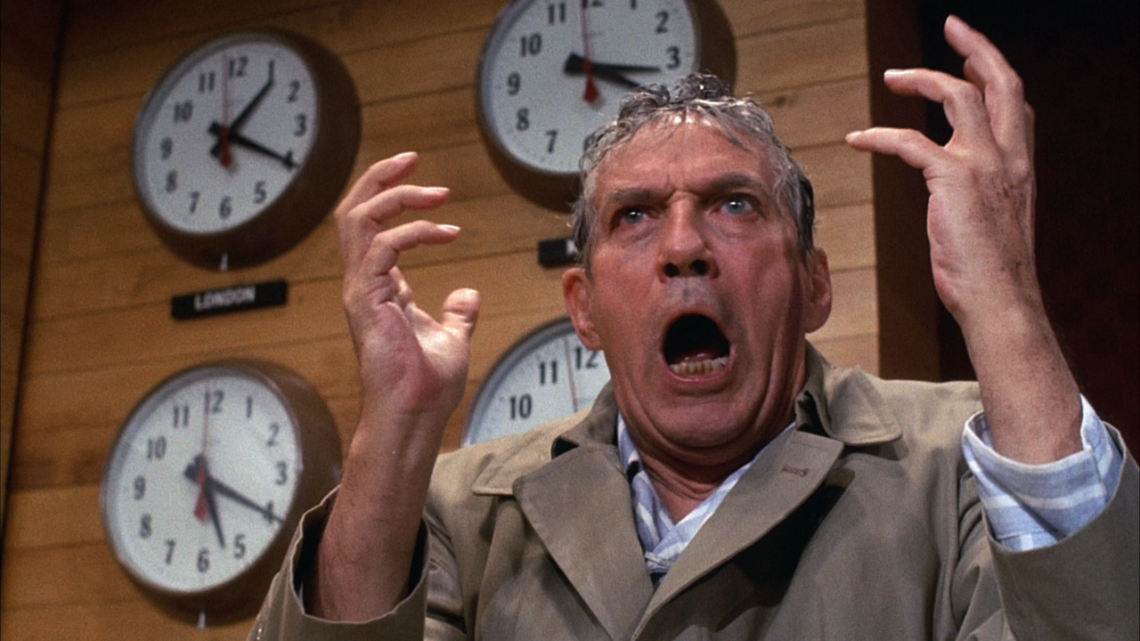 Editor’s note: Network is one of the 10 best films of the 1970s voted on by staff, friends, and readers of Movie Mezzanine. For the sake of surprise, we’ll wait to reveal where this and every other film ranks on the list until the very end. We hope you enjoy.

It’s easy to take for granted how prescient Sidney Lumet’s Network actually was for its 1976 release: the onslaught of vapid reality shows was still a few decades away, evangelical television and Fox News had yet to surface, and though the country was shaken up by corrupt politics, at least people still recognized the important of the fifth estate due to events like Watergate.

The film’s over-the-top absurdity and satire seem almost unnecessary to us now because we know better—we’ve seen the standards of television and print journalism erode in the decades since, and how many of us actually subscribe to cable television anymore, anyway? When Paddy Chayefsky was writing the script, his loony characterization became key in selling the film’s important takeaway message: desperation in the exec boardrooms leads to dangerous ideas.

Network taps into the hysteria of the television business at a time when the medium was still important, a monolithic and competitive media industry hungry to tap into the next big thing and do anything for ratings. When Howard Beale (Peter Finch), a trusted veteran anchorman for UBS, is fired at the beginning of the film, it’s understandable that the competitiveness of his profession would lead him to doing something as barmy as killing himself on air (a plot point pulled from real-life incident). Against the better judgment of his boss, Max Schumacher (William Holden), Beale is allowed to go on the air one more time to clear the air before being forced to resign, though he uses his last hurrah to call out life for being “bullshit.” Upper management is intent on punishing both Beale and Schumacher this time, but they reconsider after programming director Diana Christensen (Faye Dunaway) points out the huge spike in ratings caused by Beale’s impassioned speech. The film then diverges down a few different narrative paths: Diana and Max (a family man) begin a romantic entanglement; the network gives Beale his own “mad prophet” show; and Diana pursues a new series involving the Ecunemical Liberation Army, a radical left-wing terrorist organization recording themselves committing felonies (a send-up of the Symbionese Liberation Army).

Network is memorable less for its narrative cohesiveness than for its electric, eclectic eccentricity. All of the characters seem to be operating on megalomaniac fumes. Diana, especially, is explicitly coded as being too “masculine” for any kind of substantial emotional involvement (this deficiency deflates Max’s love for her). She’s high on the power of television, strategizing new business decisions in the midst of lovemaking, defiantly proclaiming that UBS will take the FBI and other government agencies to the Supreme Court for trying to stop the network from showing criminal footage. When Max calls her out on her insanity, Diana tells him she doesn’t need his “menopausal decay and death” (not the first time the middle-aged Max is said to be suffering from the female condition), as if there’s an industry binary pitting desensitized, young energy against the “craggy, middle-aged” stupor of the old-timers.

And what of Frank Hackett (Robert Duvall), the power-hungry exec reporting back to the CCA, the company that owns UBS? When he threatens to kill Beale with his own hands the first time around after the so-called messiah tears apart the company’s buyout on his show, he sounds like he’s just blowing off steam. Beale becomes once again a liability for the network, but the higher-ups refuse to fire the brand name. The only answer is murder, says Hackett. Or assassination, says Diana. A sexy way to die, especially if it’s broadcast on-air. “I hope you don’t have any hidden tape machines in this office,” jokes one of their colleagues, though he also seems at least half-serious. The reference to Richard Nixon may seem timely and slight, but it’s clear the film is sending a strong message: corruption can take place anywhere, be it the Oval Office or a back-room network studio meeting. It’s a shame that 37 years later, we still don’t seem to know any better.