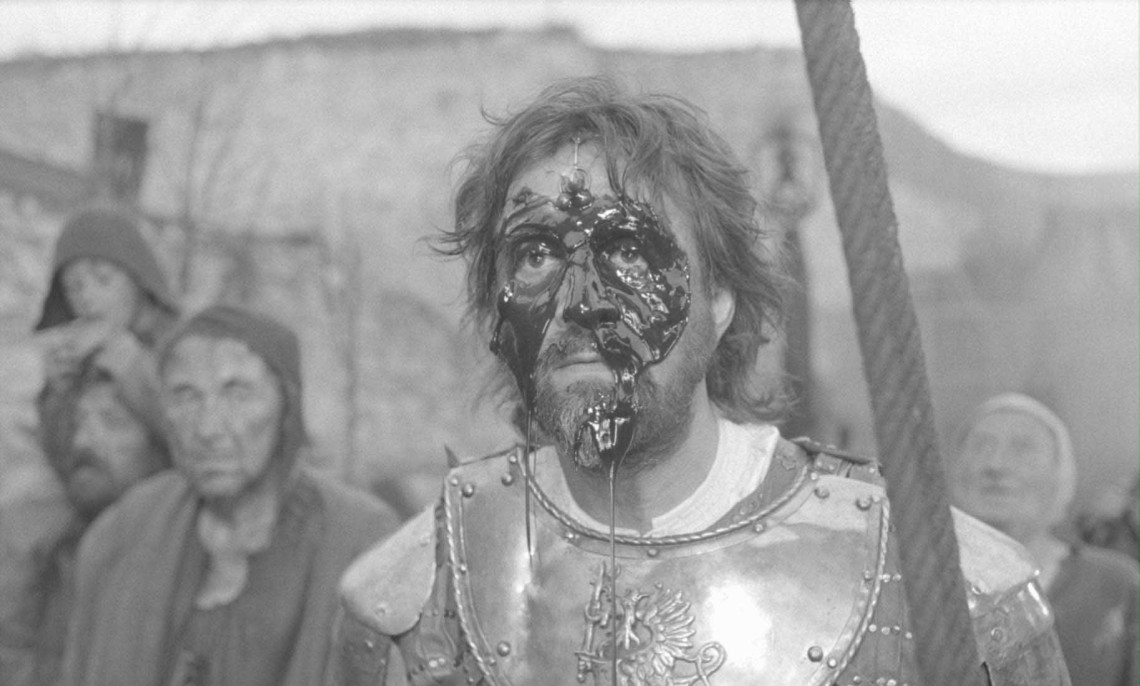 This Week on MUBI: “Hard to be a God”

No film has ever looked as tactile as Hard to Be a God, and no film has ever been less appealing to touch. Mud and excrement cake every crevice and slick every path of the film, which lopes around a medieval village for an agonizingly long time before any remote context is given for the fetid horror show on display. The plot is teased out only in piecemeal, an abstract work of science fiction in which Earth’s scientists discover a planet populated by our primitive doppelgangers and are set up as demigods who do not intervene either technologically or hygienically in the affairs of their distant, unevolved cousins.

Aleksei German’s direction has always been hard to describe. Working with numerous cinematographers over the course of his career, the filmmaker maintained a look that was equal parts hyperreal clarity and slurred focus, of angular movement and ovoid pans that resemble a half-severed head flopping around out on control. All of this is on display in this, his final film, and to an extent that outstrips even earlier feats of showmanship like Khrustalyov, My Car! and My Friend Ivan Lapshin. For the first act of the film, the camera seems to slip on every patch of mud and frost, gliding around a village as if it cannot stop. Characters regularly intersect in the frame or shove past in extreme foreground, nearly muscling the lens out of the way in pursuit of their empty-minded rota. Around them, lords rain down shit from privies without bottoms that jut out from castle keeps with no bottoms, and any and all food seems to be prepared not with spices or herbs but dirt and bodily fluids.

The movie is an adaptation of the novel by Arkady and Boris Strugatsky (also the authors of Roadside Picnic, the basis of Andrei Tarkovsky’s Stalker); the book itself is a satiric relic of the Soviet era, depicting an obvious allegory in the extermination of intellectuals by the ignorant majority with the consent of their hypereducated overlords. Amusingly, and depressingly, the narrative is as relevant as ever, but instead of playing upon easy targets to score political points, German abstracts the narrative to the point that the only concrete details become the images, and the only foothold for the musings of Don Rumata (Leonid Yarmolnik), the reluctant terrestrial scientist installed as a conquistador-esque baron.

Rumata’s nominal foe is Don Reba (Aleksandr Chutko), a rogue leader who has lost all sense and spearheads an even more aggressive version of the planet’s anti-intellectual slaughter. Yet instead of setting up a clear battle of wills, the film gets lost in Rumata’s headspace as he ruminates in voiceovers redolent of Willard in Apocalypse Now. Rumata’s thoughts are uniformly bleak, and his attempts to create havens for what few thinkers he can find among his subjects are more a perfunctory coping mechanism for himself than a viable plan to protect the germinating seeds of this planet’s Renaissance.

Hard to Be a God’s elliptical imagery and visceral focus on extreme violence as a precondition of medieval life have precedent, most notably in the Czech classic Marketa Lazarová. Rumata’s journey, filled as it is with dead-ends, red herrings and erratic progression, nonetheless remains cogent through the detail of its cinematography and in-camera movement. The movie is filled with eerie, indelible images, from a critic being drowned in an outhouse to Rumata embracing his most savage side by smearing pitch all over his face to prepare for war. German was never more than a fringe figure in life, but the belated release of his posthumous masterpiece is one of the film events of 2015, and one of the best movies of the year.

If you’re interesting in watching Hard to be a God on MUBI, use your Movie Mezzanine coupon for an exclusive discount and access to a breathtaking library of cinema!