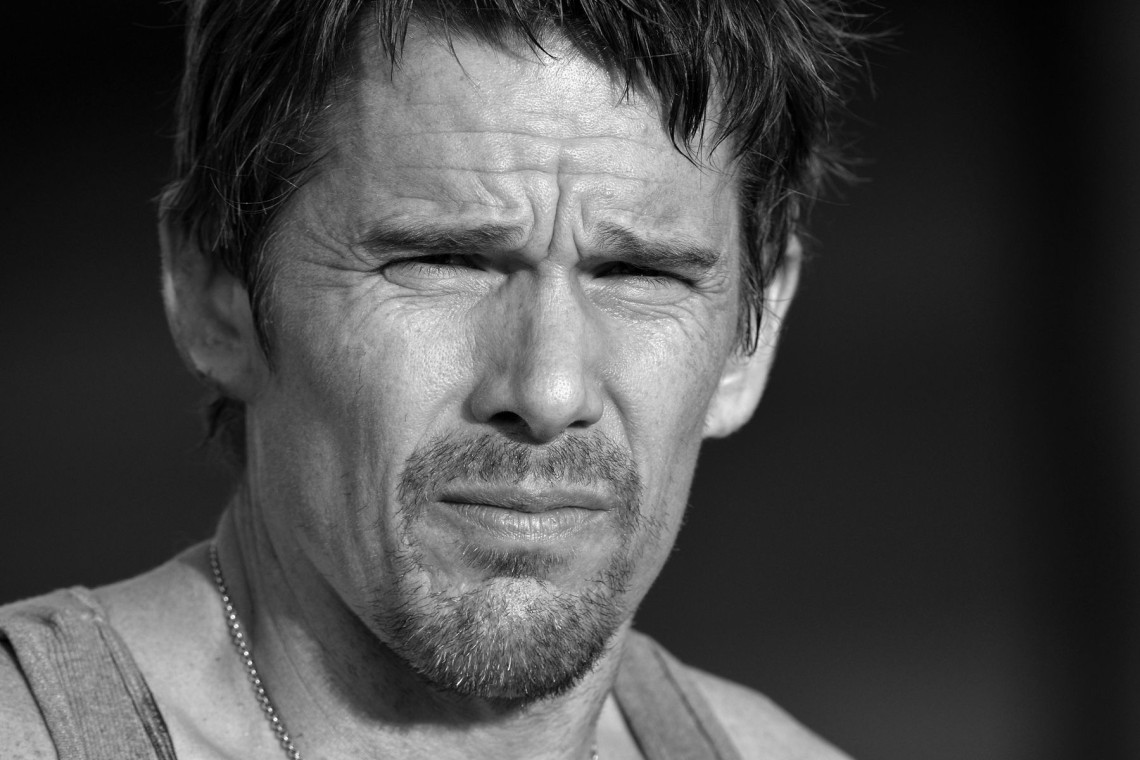 In Seymour: An Introduction, Ethan Hawke’s first attempt at making a documentary, pianist Seymour Bernstein proves to be an affably candid subject, sharing the story of his long life and genius-level talent. But a more subtextual question can’t help but hover over the film: What drove this successful actor towards the story of a demure, almost Zen pianist? As artists age, it’s temping to look back, searching their work for connecting tissue. But the Ethan Hawke on fleeting display here gazes forward in search of some as-yet-unrevealed shore. Fitting, then, that he has chosen to profile Bernstein, whose philosophy of patience and encouragement could be seen as a skeleton key to the development of Hawke’s own career.

Ethan Hawke’s debut in Joe Dante’s Explorers is, at best, serviceable, his job seeming to be to not get in the way of the creature effects. Had Hawke been born 5 years earlier, he might have been swallowed up in the Brat Pack maelstrom that burned the talent out of a generation of actors. In 1985, when David Blum published his seminal essay on bad-boy hubris, young male Hollywood seemed as reducible as the yield of a bottom-trawling fishing vessel—an environment in which Rob Lowe could be mentioned in the same breath as Nicolas Cage (bizarrely singled out for “ethnic looks”).

In the summer of ’85, all eyes were on the upcoming release of St. Elmo’s Fire and the ever-escalating opera of its stars. Who would have ever noticed Hawke, the rubber-faced kid in that movie that kind of looked like The Last Starfighter? By the early ’90s, though, a few isolated superstars had emerged from the tutelage of John Hughes and Frances Ford Coppola, the rest vanishing into addiction, sitcoms, or Disney franchises about kids playing hockey. No one ever saw Hawke coming. And yet here he is decades later, questioning the value of fame and wealth, while his wizened subject admits that he is “not so sure a major career is a healthy thing.” Perhaps, as both men’s careers suggest, size is secondary to craft.

It’s ironic that a future poster boy for the cynicism of Generation X should be featured in something as sincere as Peter Weir’s Dead Poets Society. Though Hawke’s character gets to instigate the now-iconic “standing on the desks” scene, his real acting showcase comes earlier, when Robin Williams expels his timidity through forced poetry. Williams’s hand covers Hawke’s eyes, camera circling in tight focus, background spinning in a perfect marriage of photography and character interiority. Even with half his face covered, in an unbroken take lasting nearly a full minute, we watch a young man—character and actor—transition from one stage of maturity to another. 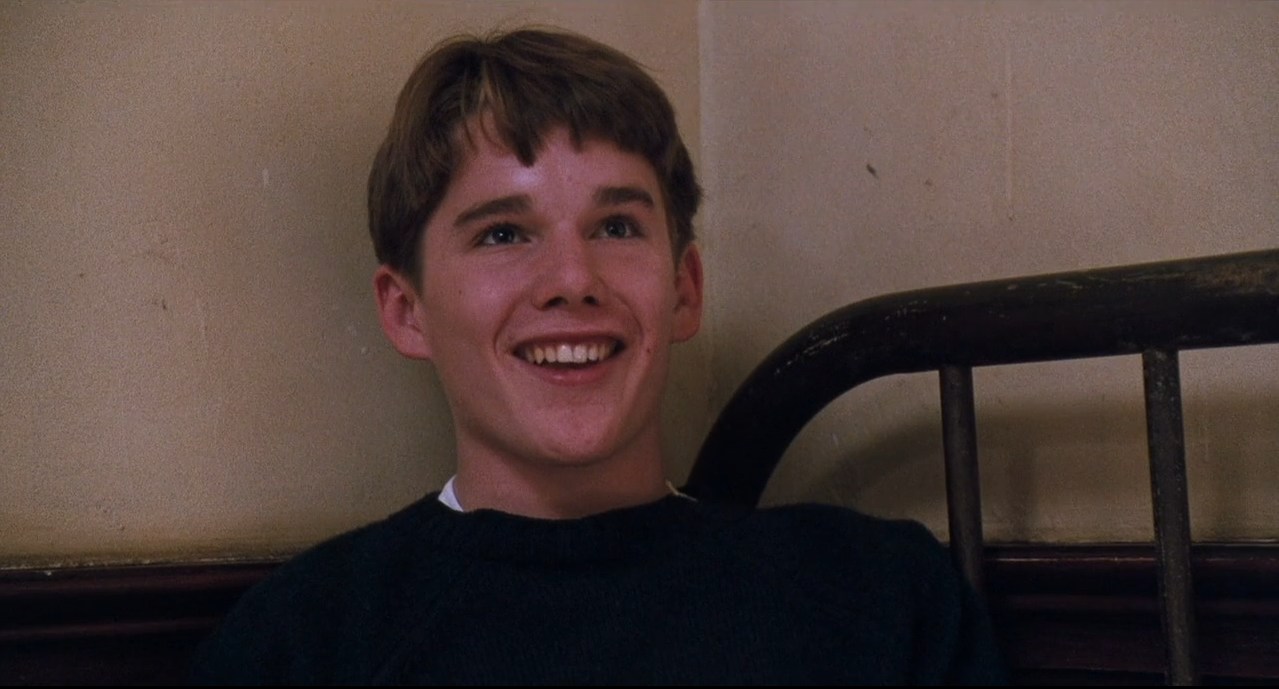 It’s one of the few clips Charlie Rose cued up during a recent conversation with Hawke, and it’s worth stopping and watching right now, not just for the clip itself, but also for Hawke’s speechless reaction (it starts at around the 11-minute mark). “What did it mean to you?” Rose asks Hawke, to which he replies, “Everything.” He had just turned 18 years old, he says. He calls his earlier work posing, imitation, but of that Dead Poets Society scene, he says, “That was the first time I ever acted.”

If a single year were to mark the arrival of Hawke as an actor, it would be early 1994 through early 1995, even if it didn’t necessarily put him on the map as a movie star. He appeared in Reality Bites in February of 1994, which, contrary to its status as slacker gospel, landed with a critical and commercial belly flop. Entertainment Weekly dismissed Hawke as the “cute, hostile deep guy.” The movie doesn’t do him many favors, giving him the acting softball of being too smart for his own good while pining for Winona Ryder (you know he’s smart because he plays the acoustic guitar and calls things “existential”).

Hawke tries to invest his scenes with an authentic mixture of vulnerability and cruelty, but he gets too much room to vacillate between his two worst acting tendencies: his wounded-puppy-dog and smug-douche smirk. But then, in the opening months of 1995, he appeared in Richard Linklater’s Before Sunrise. Film Comment’s Robert Horton called Hawke, “a bit of a dork…given to superficial charm,” the film possessing a “cynicism that capitalizes on the actor’s sour streak.” Horton furthermore describes Hawke’s generation as “encased in a shroud of self-consciousness,” though he at least lends the star, and Linklater, the benefit of the doubt in terms of their career potential.

Horton’s skepticism is worth taking with a grain of salt, though. Hawke debuted on Broadway in a 1992 production of Anton Chekov’s The Seagull, and had been a consistent onstage presence for most of the three years preceding Before Sunrise. In fact, along with his film performances, he has continued to hone his craft on the boards for over two decades, earning Tony Award nominations and consistent praise from New York theater critics. Such a commitment to the lower profile of the stage illuminates why he was such a natural choice for the Before series.

Even beyond the years that pass in between installments, the films are made up of frequently long takes reliant on Hawke and costar Julie Delpy’s conveyance of both naturalistic conversation and the increasing complexity of their relationship. It’s impressive to watch the couple spar during the 13-minute long take during the opening stages of Before Midnight, but less so when you remember that the actor involved once spent six months performing in The Coast of Utopia, an 8-hour trilogy of Tom Stoppard plays. Given the accelerating rate of cutting, we are forced to acquaint ourselves with most screen actors through sometimes-relentless montage. Even some of Hawke’s most celebrated roles, such as his rookie cop in Training Day, are a succession of tiny germs extracted from a nonlinear culture of takes, angles, and ADR. But even Hawke’s breakthrough scene in Dead Poets Society reveals his ability to not just emote in quick bursts, but express internal revolutions within an editorially curated moment.

From here, we could follow Hawke’s film career from mainstream work in the likes of Gattaca to riskier projects like playing the title character in Michael Almereyda’s 2000 modernization of Hamlet. Watch him in Before the Devil Knows You’re Dead and see an actor who has shed the go-to mannerisms of his youth. Sometimes, as with his work in Linklater’s time-distended projects (the Before series, Boyhood), the fact that he plays the same character all but makes this process into text. His young man’s smirk isn’t necessarily gone, but he has gained control over it, only employing it when he needs to. Even in his forays into film directing, he’s borrowed techniques from Linklater. 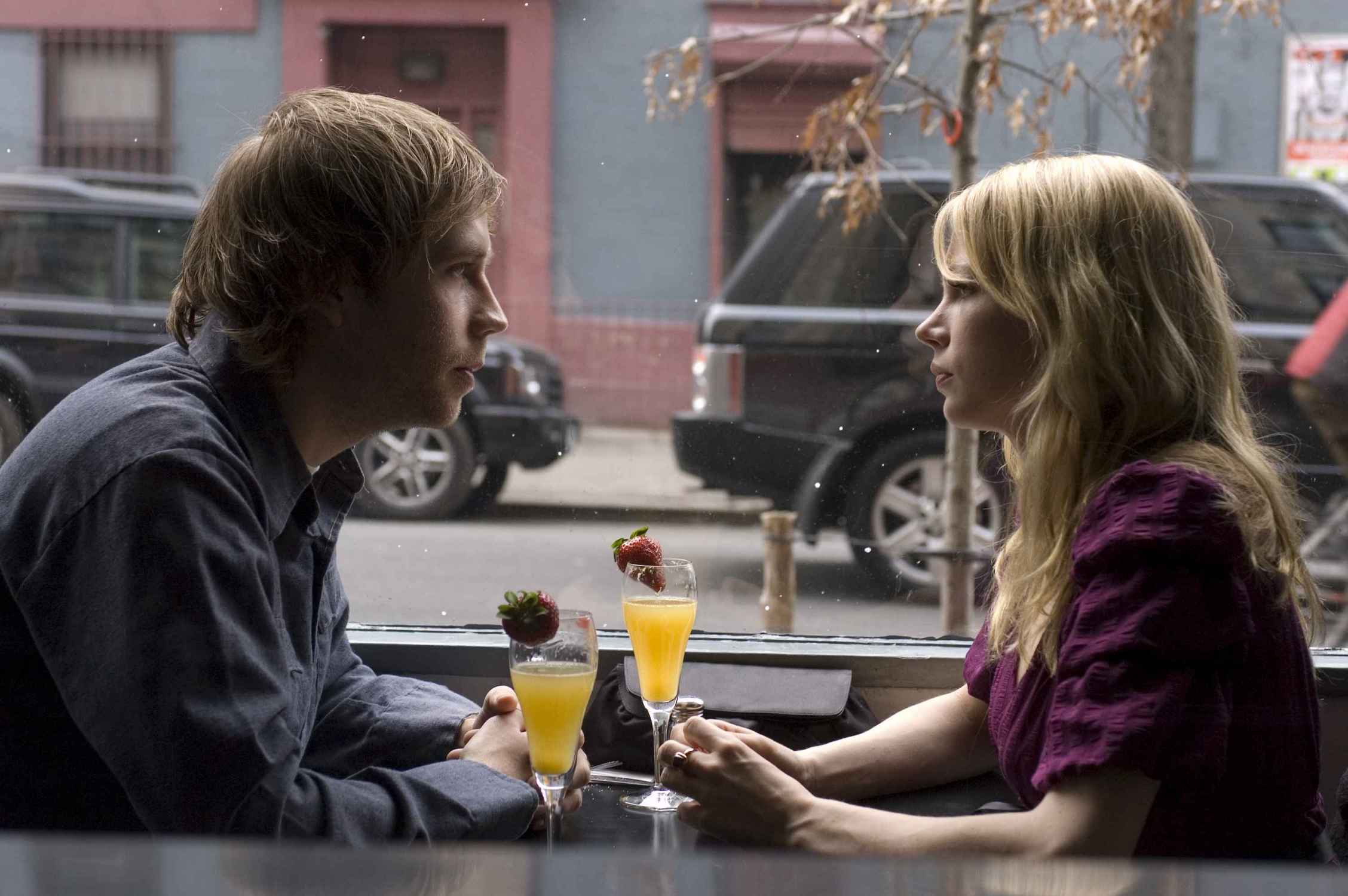 At one point in his adaptation of his own novel, The Hottest State, he frames a pair of young lovers in long, extended two-shots and does his best to lend a real-time component to the development of their mutual attraction. But trying to trace the path between Ethan Hawke’s many projects can be jarring. He alternates between undemanding B-grade quasi-schlock (The Purge, Getaway) and some of the most consistently magnetic performances of the last 15 years. And yet Seymour: An Introduction invites us to reassess this seemingly chaotic mixture of projects. “Some of the most successful things I’ve done have been some of the worst,” Hawke tells Bernstein as they discuss their relationship with performance. As he stands on the brink of his fifth decade of life, Hawke admits early in the film that he has been suffering from an increasing degree of crippling stage fright. Bernstein sees this as part of his artistic maturation.

Tracing that path can often lead to a refrain of the same questions: Who was that person then? What hints were laid in the beginning about what they were going to become? Who are they today? We could say that Hawke’s are just a bunch of films he performed in, some better than others. Seymour Bernstein suggests we think differently, describing his own journey towards survival on stage as a vehicle for the integration of the self.

Over the last decade, Ethan Hawke has settled into the comfortable productivity of a middle-aged actor. Though he was never the biggest star in the world nor a revered poster boy for acting skill, he nevertheless accumulated enough clout to choose between projects while retaining enough space to develop into something far beyond his by-the-numbers beginnings. He was 42 when he filmed Bernstein admitting that he didn’t achieve true comfort onstage until the age of 50. The path, it would seem, is one available only to the patient. It’s okay if we can’t predict where Ethan Hawke is going, or even settle on what it is he is now. Turns out, neither can he.