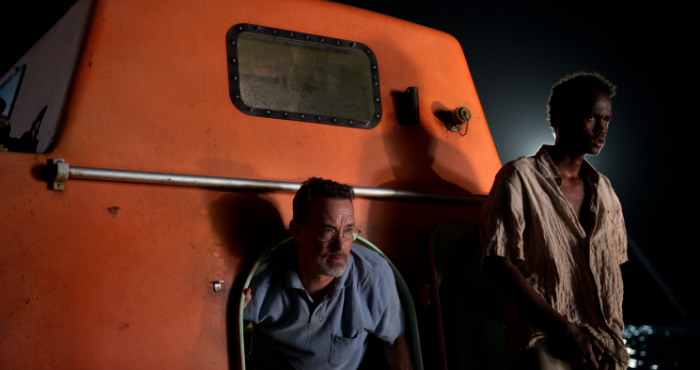 The Empathy of ‘Captain Phillips’

If you’re a Hollywood producer, and you’ve got your hands on a particular kind of property – a thrilling docudrama about an intense and violent recent event – who is the first director you call? There is only one choice: Paul Greengrass.

The English director specializes in giving intense, real-life stories the Hollywood treatment without sacrificing the gravitas and immediacy that they deserve. He pulled off this trick twice before with Bloody Sunday, about the massacre of Irish protestors by British troops in 1972, and United 93, which put us inside the plane that went down in a Pennsylvania field on 9/11.

Greengrass and his long-time cinematographer Barry Ackyroyd use natural lighting and hand-held cameras to make audiences feel like they are inside events happening in real-time. But these films never aim for objectivity. There is always a strong point of view in their stories of political violence, and Greengrass and co. have a long track record of siding with the oppressed party.

You could also say that his films have a distinctly liberal perspective. Although United 93 was framed as largely apolitical, it proffered a subtle criticism of the Bush administration’s disorganized response to the attacks. Greengrass also helmed Green Zone, which dramatized the failed search for WMDs in Iraq, as well as two Bourne movies, whose villainous intelligence agency seemed to reflect Bush-era concern over the expansion of surveillance powers authorized by the PATRIOT Act.

Now, he brings this populist perspective to Captain Phillips, the story of Somali pirates who hijacked a cargo ship in the Indian Ocean, absconded in a lifeboat with the captain, and were eventually killed by Navy snipers. On paper, this looks like more Bourne than Bloody Sunday; it’s a slam-bang action movie that just happens to be true. But Greengrass put his own stamp of empathy on the material and finds a way to make us think, even when he’s thrilling us.

His themes are clear right from parallel opening scenes that introduce the lead characters. Richard Phillips (Tom Hanks) drives to the airport with his wife (Catherine Keener), who worries aloud about the dangers involved in his work, helming massive cargo ships through dangerous waters. He reminds her that they need money because their kids are going off to college, and he’s worried about their ability to find jobs in a poor economy. He has to work to support his family, even though the work is dangerous.

Jump cut to the Somali coast, where a local warlord arrives in a small village and demands that the men take to the sea to rob a ship for him. One of them, Muse (Barkhad Abdi), is chosen to lead a crew on this dangerous mission. In this way, Greengrass equates Phillips and Muse by setting up parallel motivations: they’re both just trying to earn a living the way their culture dictates. 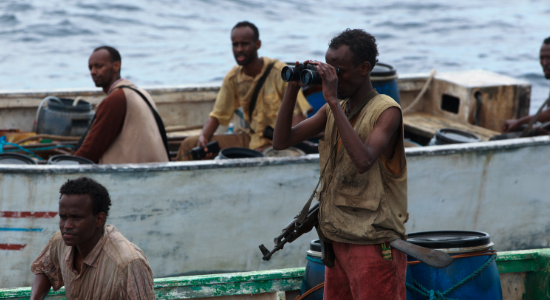 It is easy to see how another director could have crafted a more militaristic film from these parts. Captain Phillips is at heart a thrilling survival story in which the U.S. Navy saves the day. After a tense cat-and-mouse game aboard the ship, the pirates escape in a covered lifeboat, with Phillips as their hostage. Their plan is to bring him back to Somalia and get the insurance company to pay a ransom, but soon the Navy arrives, and the pirates’ fate is sealed.

The second half of the film is a long, slow build to its inevitably heart-stopping conclusion. Greengrass knows how to end a film with a bang – watch United 93 again if you need convincing – but it is Hanks’s performance in the final scenes that make the film’s case for empathy. After his rescue, he fights back tears – and eventually releases them – but you’re not quite sure whom he is crying for. Is it himself? Is it his family, who he realizes have been put through hell waiting to hear of his fate? Or is he crying for his captors, all of whom are by that point dead or soon to be imprisoned? The film’s major accomplishment is that it convinces us that the pirates are worth our tears.

Despite this achievement, Captain Phillips lacks the urgency of United 93 and Bloody Sunday, the director’s finest works.  His style – the immediacy he achieves with his handheld camera work and natural lighting – serves a real social purpose when applied to the events that have shaped our world, like 9/11 and the Bloody Sunday massacre. It is a controlled re-experienced of collective national traumas, a crucial element in the collective healing process.

But the travails of the real-life Captain Phillips were not a national trauma, merely an exciting story that captivated us for a few days. The magnitude of Greengrass’s achievement here should not be downplayed – same goes for his terrific cast and crew – but the film feels a little opportunistic in comparison to those earlier films. It is a testament to the strength of the director’s filmography, however, when a movie this incisive and thrilling does not rank as one of his best works.