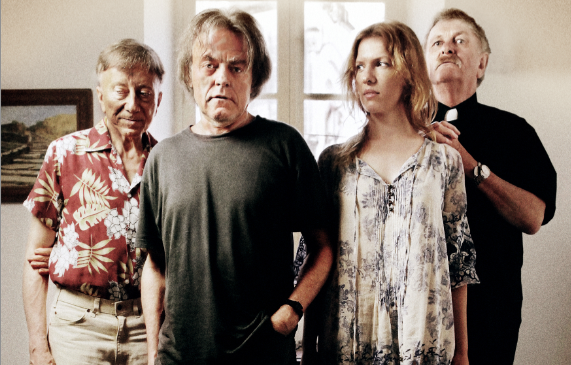 Ebertfest: A Discussion with To Music Filmmakers Sophie Kohn and Feike Santbergen

This morning Sophie Kohn and Feike Santbergen were kind enough to sit down and discuss their short film that played at Ebertfest yesterday, To Music. You can read my thoughts about the short here. Below is the transcribed discussion we had this morning.

Fragoso: What brought you two filmmakers together?

Santbergen: The festival in Cannes was the first place we met, and what brought us together was Paul Cox. I met him in Holland and became friends with him after being his intern. So I’ve been traveling with him a lot. I usually go  with him to Cannes. And so I met Sophia at Cannes who was there on her program with her University. Year after year we starting meeting at Cannes.

Fragoso: What school do you attend?

Kohn: University of Georgia. Yeah this film is fate. Paul introduced us and we were able to make a film about this town that he loves so much. And then he (Cox) got be in it, and the whole project came full cirlce.

Fragoso: It’s set in the south of France, yes?

Fragoso: Was there something that motivated you two to make this film?

Santbergen: We were completely unmotivated.

Fragoso: Unmotivated? That must be rough.

Santbergen: No yeah, actually we were sitting in a restaurant in Cannes having a glass of wine, and we were just joking about the people who we knew would get together at Paul’s place for a weekend. It’s just such an interesting group of artists and eccentrics. Then we jokingly starting creating this story.

Kohn: Then we asked, well, do we have a camera? Yeah, we can get a camera.

Santbergen: It took awhile before we go there though. Eventually a script emerged.

Kohn: Yeah we had a script, and then followed it loosely.

Santbergen: Then it got serious, and suddenly we were making a real film. We had just a little 5D camera sent in from Holland.

Kohn: Everything was on the verge of either happening or not happening. We had to make sure the camera got delivered to this tiny town that doesn’t even numbers.

Fragoso: So everything just fell into place. That is fate though.

Kohn: I really felt like it was a magical moviemaking experience. It’s kind of like you plan to make a film and then suddenly something spontaneous happens. The sun breaks through, and we captured that all the way through.

Fragoso: Anytime I receive an opportunity to speak to filmmakers I always like to ask them which directors inspired them. As a writer I’m inspired by Roger, and so who inspired you two to go into the profession you have?

Santbergen: These are actually two very different questions for me. I have filmmakers who inspire me because of their storytelling or their visual use of the art. But again, when I was in film school and I magically ended up in Australia interning for Paul Cox, and I think that’s really where I learned the value of cinema, and what it can actually be. From that point forward I knew I wanted to be a filmmaker.

For the others I’ve made I know my friends and I constantly watch Malick to see what he’s doing. There are European filmmakers like Joachim Trier who makes really strong, dramatic films. Paul Thomas Anderson is an amazing filmmakers, he’s so independent and brilliant. I can go on for awhile.

Kohn: I’m not sure when my love for filmmaking came about. I’ve been fortunate enough to attend a lot of film festivals since I was little. Just the feeling of the cinema and the people and just, everything. At first I wanted to be an actress. But then I realized there was more than just the people in front of the camera at age 10 or 11.

Fragoso: Most kids don’t make that realization at age 10. At that age we all dream of being someone famous – personally I wanted to be a basketball player, until I realized I wasn’t 6 foot 8.

Kohn: (laughs) Yeah, I guess I just wanted to make films, and realized the only way I can do that is to make them myself. In terms of people, Werner Herzog was a big person for me. He inspired me, and learned a lot from him and his films.

Fragoso: Herzog is incredible. I think I read somewhere that he’s the only filmmaker in history that has made a film on every continent.

Kohn: And you know, every genre. He’s done these huge epic narratives to these small documentaries. He really doesn’t have any constraints.

Fragoso: So I saw To Music and naturally I formed my own opinions about what the film is about. But I’m curious as to what you think your film is about?

Kohn: The power of music. Life in general, healing and depression.

Santbergen: And passion. I think it’s really about passion. How passion can hide inside yourself and then suddenly reappear.

Fragoso: When the film ended …  I kept wishing it hadn’t.

Santbergen: That such a great thing for you to say.

Fragoso: Yeah you know it ends, I thought that this really could be a feature film. But I suppose that’s part of the goal of a short film right? To leave us wanting more. And on that note, what are your plans for the future, movie-wise?

Santbergen: I’m working on a few ideas. I long to do something more substantial. I’ve made four shorts now. And I’m not quite there yet. I’m approaching the point to where I want to start asking people where we’re going to get funding. I think discovering what effort it takes to make a little film, it made me realize I need to feel deeply about what I want to make.

Kohn: And yes, I want to be involved in something with Feike. I just finished post-production on this film I did this summer in London called The Liver. It’s this silent, surrealist film about a man who receives a liver transplant, told through the perspective of the Greek Gods of Eros and Thanatos. Yeah, the making of To Music and The Liver reiterated how much work it is to make a film.

Fragoso: So these are all passion projects?

Kohn: I hope that everything I do is. People are saying that a lot.

Fragoso: I say that as someone who writes about movies constantly. And I can tell you that I see a lot of movies that seemed to be inspired purely by monetary reasons. I’m sure both of you will never get to that point.

Santbergen: I sure hope so. Back in highschool I had this really strong urge to express my feelings because I was very shy. I really have to give shape to my thoughts and feelings. If I’m going to make a feature and I’m going to complete drown and lose all my friends friends, and not see my  family, and go completely broke, in the end at least I might have given shape to some of my true feelings and soul.

To Music will be distributed by Shorts International. Below is the trailer.