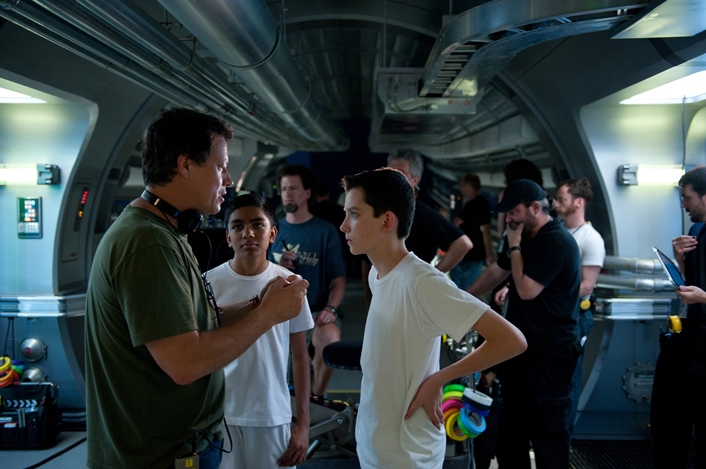 This Friday, Ender’s Game becomes the latest book once thought “unfilmable” to have a movie adaptation successfully released. After two-and-a-half decades of false starts and crew rotations, the project was finally realized under South African writer/director Gavin Hood and a team of producers that included Roberto Orci and Gigi Pritzker. The book is one of the rare pre-21st century sci-fi novels that impacted not just genre fans but the public at large, so these filmmakers have quite the burden of expectations on their shoulders. At a promotional junket in Los Angeles, I was one of dozens of writers who participated in a press conference for the film.

Hood, Pritzker, and Orci on what the book means to them, and how they came to the project:

Pritzker: I got Ender’s Game many years ago from my nephew, who was in eighth grade at the time. He struggled with reading, but he came to me and said, “I read this book, and it was really great.” So I read the book, and it allowed a young boy and a middle-aged woman to have an incredibly interesting conversation. And he said, “Wouldn’t it make a great movie?” Now that boy is a father studying for his Ph.D, and the movie is coming out. It’s been a really long journey!

Orci: I read it at the same age her nephew did, in junior high. My uncle, who got me into all things sci-fi, gave it to me. I loved that it didn’t talk down to me, that it celebrated intelligence, that it had adult themes. I never imagined that I’d be working on it! When I got into this business, I found out that it was getting bounced around studios, and they were messing it all up, I could tell. So I thought it’d be something unmakeable. But then Gigi called us all together, and we all had the same instinct to be true to it, and that’s when it hit me that something I read as a 12-year-old, suddenly I got to work on it.

Hood: I read it as an adult! Five years ago, my agent was looking for an adaptation for me to do again. I’d done that on Tsotsi and really enjoyed it. I wanted to write the script for my next project, as opposed to doing one being written by twenty people while it was shooting (but that’s another story). The book was sent to me, and I had no idea of its history. But I related to it, because I was drafted when I was seventeen. The book brought up all these old feelings of being taken away from home, and having people alternately yelling at you and praising you for aspects of your personality that are not the ones your mother would praise. It was a very disturbing time, and I came out questioning my own nature. I thought, “Wow, that’s what’s happening to Ender!”

I have a nephew as well, and he loves the book. The conversations that we’re able to have as adults with younger people about the themes – that’s what I hope the movie inspires. I hope that the movie’s cool, and fun, and big, and special, and we worked very hard on those visual effects! But at the end of the day, if it can generate a conversation as it did for [Gigi and her nephew] and me and mine – that’s something we don’t always get in a movie.

3D works best when you have foreground, midground and background. In Gravity, you have that because [the characters] are always around a spaceship or something. When we tested for 3D, in the deep space sections [of the film], when you’re looking at a distant planet, it doesn’t look 3D. If you look at the moon, it looks 2D, because the distances are so great. The spaceships start to look like little toys, and it detracts from the moment. Parts of our movie would be awesome in 3D! But parts of it would not have worked.

Another reason is that this is a very intimate story. We used longer lenses to isolate [Ender], to blow the backgrounds out of focus and get inside his eyes. 3D doesn’t like that. 3D prefers wider lenses, because when things are out of focus but in 3D, it bothers you. So in the end, we decided that 2D was the right format.

Orci, on how producing Ender’s Game has differed from his previous projects:

Well, those other projects I wrote. This one I got to approach as a fan. I got to say, “Do I like this, or don’t I?” I was a fan of the book for so long that I’m not sure I would have had the perspective, frankly, to do it justice. I read Gavin’s script and thought it was true to the book, and I couldn’t have done it better. And it was a relief! I’m not on the hook to be burned at the stake for how I wrote it!

Pritzker and Hood on the diversity of the casting:

Pritzker: [The diversity of the characters] is one of the things that resonated with me about the book. It’s in a world beyond boundaries and national definitions, and people have all bonded together. It’s why Ender’s Game isn’t dystopian – it’s really hopeful and positive, which is something we all responded to. It’s not another armageddon world. It’s a world worth saving, where we’re all in it together. It was important to all of us to reflect that in the movie.

Hood: The story is set on an international station, so it needs to be diverse. We auditioned kids from all over the world, and we found the best actors for each job. I think what was most important was finding kids who were genuinely smart. You can fake a lot of things, but you can’t fake “smart.” These kids have it – they are genuinely thinking people.

Hood, Orci, and Pritzker on what they took away from the experience of making the film:

Pritzker: I learned tenacity. It took years to make this film. To follow through, you have to put your head down, and you can make it happen. I also learned about the strength of good source material. People love this book. Everyone in front of the camera and behind the camera made this movie for the same reason: they love this story.

Orci: I’m hoping to learn that complicated material has its place. I tend to want easy answers and be a little bit didactic in my personal life. It’s very interesting to be part of bringing to life a book that actually asks questions and doesn’t give exact answers. I’ve heard people on one hand say, “This movie clearly falls on the side of preemptive war,” and literally the next minute, someone will say, “Clearly, it’s on the side of peace.” To me, that’s a victory – the idea that we can have a piece of work that’s inviting all kinds of questions, depending on where you’re coming from. I like clarity. We all like clarity.

Orci: Well let’s be clear about that! [more general laughter] But you were already there. I like this new conversation, where I don’t have an answer.

Hood: I was lucky to have an incredibly strong, supportive group of people around me. I know it sounds melodramatic. But it’s exhausting to make a film that has this kind of fanbase, with young actors who can legally only work five hours a day, acting against icons. It was really, really stressful for all of us. I just learned to appreciate and trust your support group. I was lucky to have an incredible crew and incredible cast. They all loved what we were trying to do, which was make a film for young people that didn’t talk down to them. Otherwise, it would have been just too hard.