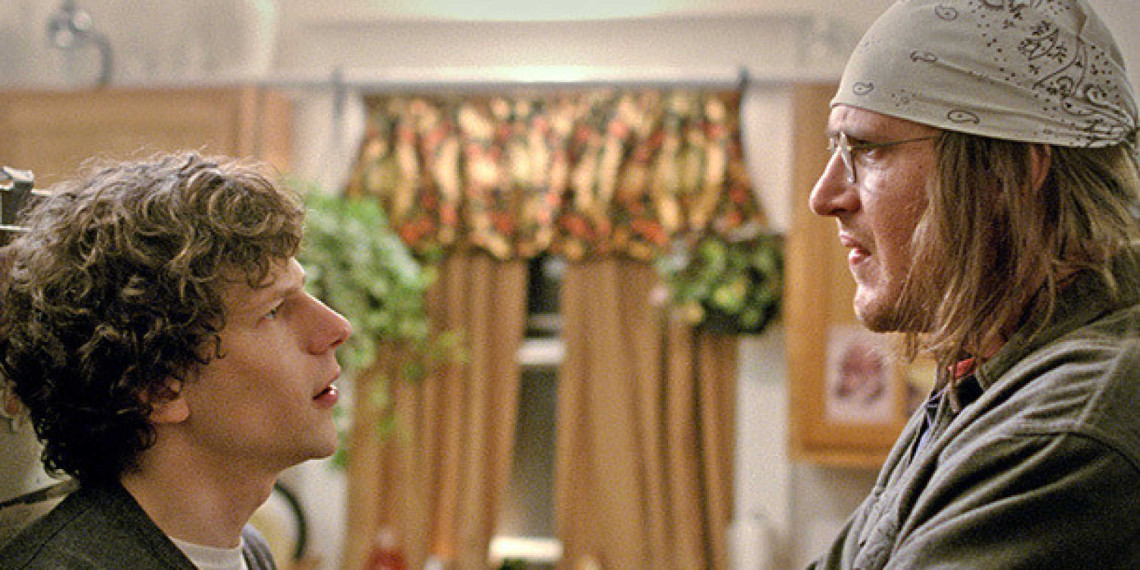 Two Writers Get Into A Car. Ouch.

David Foster Wallace is the epitome of the Writer’s Writer. His labyrinthine prose and slang-laced erudition appeal to the myriad would-be scribes struggling to find meaning in their debt-inducing liberal arts educations that never really pay off—the “obscenely over-educated,” he called them. The kind of people who are willing to crack open a thousand-page behemoth replete with scale-like endnotes, Wallace opined, must be the kind of people who are really lonely—but only as lonely as the kind of people who write 1,000-page books. With their mouthful titles scrawled across girthy spines, his books seem to lurk in college libraries waiting for you to find them serendipitously, like Bilbo finding that ring. Reading him can make you fraught with envy while simultaneously suffusing you with hope. To young writers who have yet to “make it,” Wallace’s writing inspires and infuriates in equal doses.

This difficult relationship—between writing, envy, loneliness, and, inevitably, hope—is at the heart of The End of the Tour. Jason Segel portrays the enigmatic Wallace with startling sensitivity during his Infinite Jest book tour, during the tail end of which he was accompanied by a hungry young writer named David Lipsky (played by Jesse Eisenberg, with all the physicality of a wet cat). Those interviews—originally intended for Rolling Stone, which scrapped them in favor of a story on Pacific Northwestern heroin addicts—finally materialized in the wake of Wallace’s suicide in 2008 as Lipsky’s book Although Of Course You End Up Becoming Yourself. For the film adaptation, screenwriter Donald Margulies and director James Ponsoldt don’t focus on Wallace’s writing, or even on Wallace writing—we only ever see his desk once, during a beautiful moment in which the wash of light that pours into the room reveals not the sanctuary of a genius but a messy, laundry-strewn room centered around a plain gray PC. The film focuses on the two Davids, who collectively conjure the anxieties of creativity, envy, loneliness, and the various ways in which writers try to combat it. 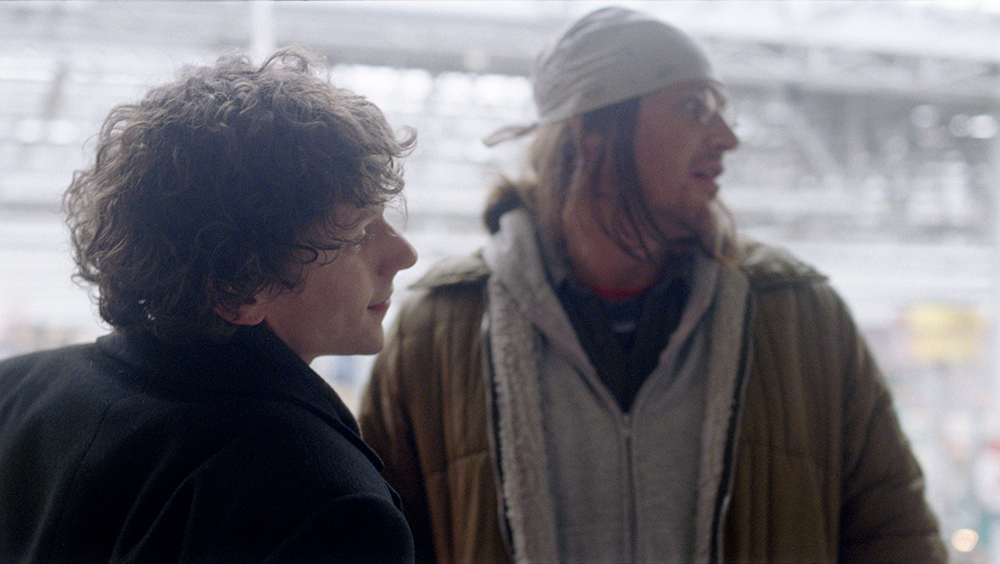 From the pensive waves of Danny Elfman’s synth score and the click-clack of computer keys in the night that open the film, The End of the Tour makes clear its intention to immerse us in the world of these two writers, one they shared only too briefly. Lipsky is, by most definitions of the word, successful: He had a short story chosen by none other than Raymond Carver for publication in The Best American Short Stories when he was still an undergraduate, and his first novel, The Art Fair, came out in 1996, around the same time as Infinite Jest. It was critically acclaimed, just not as acclaimed as Wallace’s massive tome. Lipsky consequently feels a certain tinge of ire towards Wallace after reading about the 34-year-old’s purported brilliance, and immediately decides that Wallace must be overrated. (Lipsky’s friends haven’t read his novel yet, though it’s relatively puny compared to Wallace’s; meanwhile, Lipsky’s girlfriend delves into Infinite Jest and loves it.) Of course, upon actually opening the book and parsing its dense prose, his immediate reaction is “Shit.”

The competition between the two Davids transcends words and sentences, and taps into the notion of what, exactly, a writer is—what kind of life a writer leads, what kind of vices a writer has. “He wants something better than he has,” Lipsky says of Wallace. “I want precisely what he has already.” Wallace seeks solace in Snickers bars, while Lipsky eventually pops open a bottle of beer when put in an uncomfortable situation. Lipsky’s role here is to get inside Wallace and scoop out the good stuff skulking inside. Wallace knows this, and tries, more than once, to get Lipsky himself to open up. They bond in that way awkward people bond, though it soon becomes obvious that Wallace is not the kind of guy Lipsky expects. He’s a wallflower who can’t speak with women, who has an Alanis Morissette poster adorning his wall. He can’t get laid, he doesn’t have a TV, and he finds profundity in the inherently lonely act of masturbation. Lipsky has two girlfriends, on two different coasts, between which resides Wallace in his forlorn snowy tundra with his big, slobbery dogs. The micro-aggressions begin pretty quickly: Wallace offers Lipsky coffee in the morning, and Lipsky says, “I don’t need caffeine to wake up,” insinuating a substance dependency. Wallace simply smiles.

When writers are depicted on screen (or on the page, for that matter), they are, almost unequivocally, sad people—wordsmiths and suicide savants, a sour and squirrelly race: They’re self-destructive (Young Adult); they’re ruined by success (Wonder Boys); they struggle with mental illness (Reprise); they’re caught in the skirmish between art and commerce (Contempt); they squelch their sorrows with so much pot and booze (Wonder Boys again). The End of the Tour is of the same kin as these other Portrait of the Writer as a Sad Literary Man movies, yet it subtly usurps the tropes of its ilk. It knows, more than any other movie of recent memory, that writing hurts. Akin to a drug, writing assuages pain while creating new pain, all those words like little scalpels scraping away bits of you, or the bits of fiberglass in the tobacco Wallace chews, cutting up your mouth. Wallace knew this as well as anyone, and when he couldn’t write, couldn’t remedy one pain while substituting another, he drank and fell into a cavernous depression. But this isn’t what Lipsky wants to hear. If writing is so personal, he says, then reading you is like meeting you. When Lipsky meets Wallace, he doesn’t meet the same Wallace from the page. He meets a man quietly writhing, whose doubts percolate like so much over-brewed coffee. Lipsky finds, as Wallace puts it, a sort of emptiness at the heart of what he thought was going on. How can you envy or emulate a writer like that? 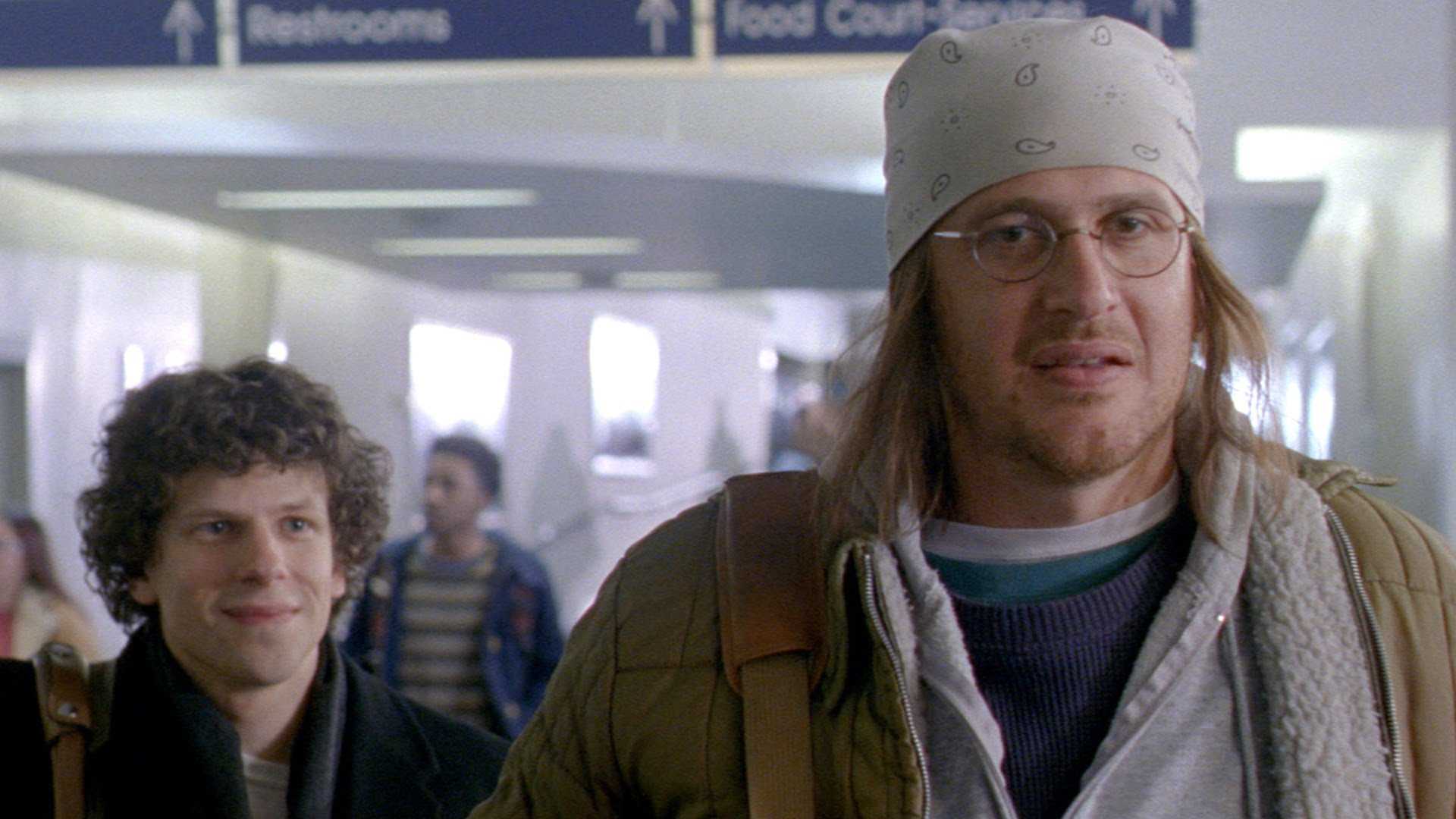 While the two Davids share the same recognizable characteristics of the modern writer (the envy, the ego, the self-loathing, the need to convert real-life interactions into prose-ready iterations), the differences between Wallace and Lipsky are essential to the film’s poignancy. Wallace consumes pulpy pop culture with the same voraciousness as he does junk food and diet soda, feeding an insatiable hunger for something ineffable, an unfillable void into which he keeps cramming so much crap. Lipsky likes what the kids call “high culture” and looks at a Pop-Tart with a mix of bewilderment and disgust. They both suck down cigarettes, “Brothers of the Lung,” though only Wallace seems cognizant of the addiction, a more mainstream and benign addiction many would consider less interesting than, say, heroin.

All writers are, at some point, afflicted with jealousy and all its corrosive symptoms. Artistic envy has been around as long as art, and the movies have had a ball playing with that familiar bitterness, from the murderous spite of Amadeus to the disintegration of love, and life, that infuses Prick Up Your Ears, the pseudo-solipsism and estrangement of Listen Up Philip to the brotherly feuding of Adaptation. Lipsky may come across as a dick, and he may very well be a dick (during that four-day trip, at least), but that sick sad feeling of self-loathing, that undeniable abhorrence for your peers’ success when you’re struggling, is an innate part of writing, one that has rarely been captured with such unadulterated sincerity as it is in The End of the Tour. Lipsky longs for Wallace’s critical and commercial success, while Wallace, who fears fame intensely, watches the wiry young writer mingle effortlessly with girls while he sits hunched over on a couch, downing diet sodas and staring with glazed eyes at a television set. Is this what brilliance looks like?

It is, of course, Wallace himself who offers the lacerating line that refutes the erroneous notion of the troubled, depressed writer as genius. As Lipsky gets in his rental car for the last time, Wallace lurches over the door, his mouth furled and his face shirking back, as if moving away from his brain. He says, with aching earnestness, “I’m not so sure you want to be me.”

Finally possessing that elusive clarity, Lipsky gives the only appropriate response: “I don’t.”