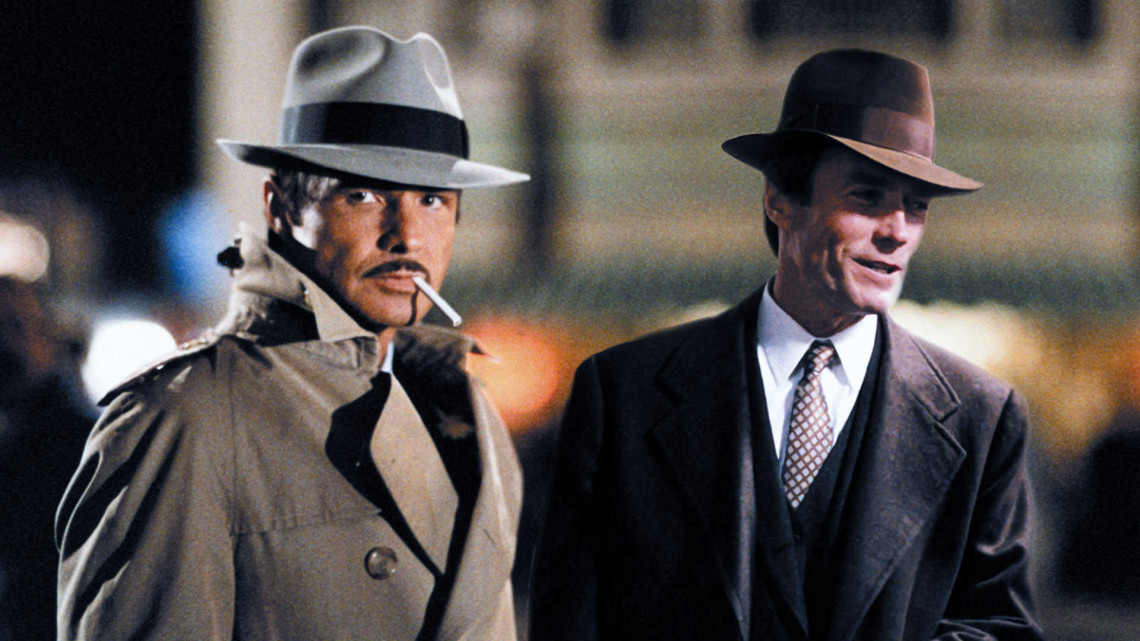 In a very special episode of the animated television series Archer, Burt Reynolds makes a guest appearance as himself playing the love interest of Malory Archer. Idolized by her son, the superagent Sterling Archer, Reynolds is portrayed affectionately as the embodiment of cool. In one scene, Archer professes he was inspired to enter the world of espionage after watching Reynolds’s first lead role in the early James Bond knockoff Operation: C.I.A. Always aloof, Reynolds replies he thought the film was “god-awful.”

Operation: C.I.A, which turns 50 this year, is at least a bit better than god-awful, if only for its status as an early portrait of the American presence in Vietnam. More importantly, however, it trumpeted the arrival of Reynolds as a movie star, following several years on the TV Western Gunsmoke. Aside from being an American answer to James Bond, Reynolds was also initially positioned as the next Marlon Brando (ironic given Brando’s dismissive assessment of Reynolds). More accurately, Reynolds’s early career is best understood in comparison to another rising star from this era, Clint Eastwood, whose career follows a strikingly similar trajectory.

Eastwood was a peer and friendly rival to Reynolds; a glance at both men’s careers reveals parallels throughout their first several decades in Hollywood, culminating in their 1984 film City Heat. From there, both men assumed widely different legacies, particularly Eastwood, who shored up his reputation as one of cinema’s greats. Before that, however, both actors’ filmographies provide mirror insight into the Hollywood studio system as well as the nature of celebrity, and masculinity, in the mid- to late-20th century. 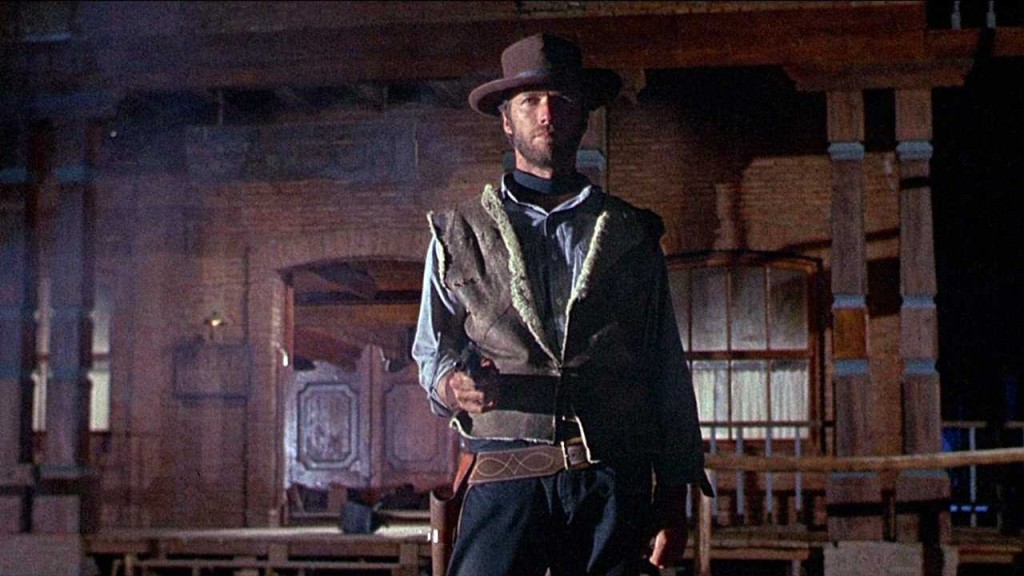 1965 was the year film audiences were introduced to what Burt Reynolds had to offer as a leading man. Incidentally, it was also the year Clint Eastwood’s For a Few Dollars More, the second in his Dollars trilogy with Sergio Leone, was released. However, the connections between the two men began over a half-decade prior. In the mid-’50s, Eastwood was signed as a contract player at Universal-International, where he appeared in small roles in B-movies like Revenge of the Creature (1955) and Francis in the Navy (1955). In 1958, Reynolds was signed as well, having previously established himself in the New York theater scene. Universal fired both actors the following year; in an oft-repeated anecdote, Reynolds remembered he was released for his inability to act, while Eastwood was cut due to his gangly, unusual appearance.

Eastwood and Reynolds first encountered one another working in television, where Eastwood played a memorable villain against James Garner on Maverick, and Reynolds cut his teeth with spots on Alfred Hitchcock Presents and Playhouse 90. By the late-’50s, Reynolds was a regular on Riverboat opposite Darren McGavin while Eastwood kicked off his stardom as Rowdy Yates on Rawhide. When Riverboat ended, Reynolds eventually joined Gunsmoke as Quint Asper, the half-white, half-Comanche blacksmith. (In fact, in this scene from the show, Reynolds’s fight was choreographed by his future collaborator, the legendary director and stuntman Hal Needham.)

In reflecting on their later career decisions—where they occasionally seemed more concerned with quantity over the quality of their projects—it is critical to grasp both actors’ early education as Hollywood bit players in film and television. During this period, working the studio circuit was the means to earn a living and develop professionally. (With Eastwood, his interest in directing was sparked during his time at Rawhide.) That approach—networking within the established system—underscores an old-school workmanship, whether it’s Eastwood punctually finishing directorial projects under budget, or Reynolds appearing in a wide array of subpar films seemingly for the money.

By the mid-’60s, Eastwood’s Man with No Name anti-hero had made him an international film star. On the heels of this, and with his role on Gunsmoke concluding, Reynolds opted to appear in his own Spaghetti Western, 1966’s Navajo Joe. (Like on Gunsmoke, in a curious stretch of casting, Reynolds portrays a Native American.) The film was directed by Django’s Sergio Corbucci, a contemporary of Leone’s and another Spaghetti Western legend. Like the Dollars trilogy, Navajo Joe featured a score from Ennio Morricone, which film-score nerds will recognize from during Bill’s death in Kill Bill as well as when Tracy rips up Paul’s posters in Election.

Reynolds followed up Navajo Joe with several other Westerns, including Sam Whiskey (1969) and 100 Rifles (1969). As Vincent Canby’s review of Sam Whiskey underscores, Reynolds still suffered from comparisons to Brando, while at the same time following Eastwood’s genre choices. It was not until 1972’s Deliverance that Reynolds was finally allowed to forge his own cinematic identity (not coincidentally, the Brando comparisons ceased with the introduction of the infamous Reynolds mustache). And even then, Reynolds and Eastwood continued evolve nearly in lockstep. 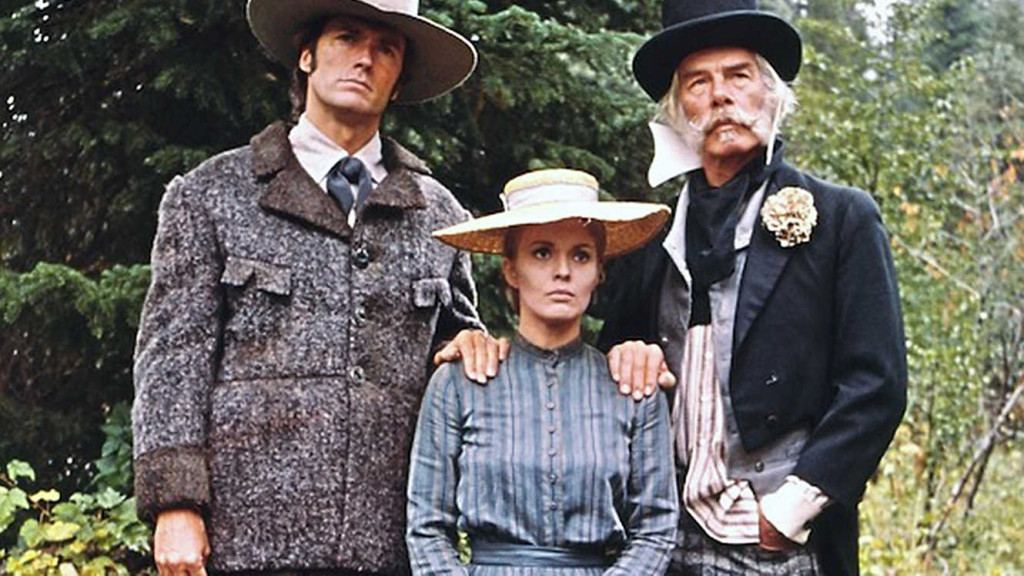 Each actor appeared in quixotic musicals, perhaps in a bid to demonstrate range—or pay homage to their classic Hollywood roots—with Eastwood singing in the hilariously ill-conceived Paint Your Wagon (1969) and Reynolds starring in Peter Bogdanovich’s Cole Porter-oriented At Long Last Love (1975). (Neither of those films represented either man’s final contribution to music, either. Reynolds also headlined The Best Little Whorehouse in Texas [1982]. Eastwood, meanwhile, directed the Charlie Parker biopic Bird [1988] and has a widely documented interest in jazz; he also helmed the 2014 screen adaptation of the hit Broadway musical Jersey Boys.)

Eastwood directed his first feature-length film with 1971’s Play Misty for Me, while Reynolds’s debut came in 1976 with the cult classic Gator. Like Eastwood—who learned from efficient genre masters like Don Siegel and Leone—Reynolds exudes the influence of stylists like Hal Needham and Robert Aldrich. Reynolds hasn’t been as lauded for his work as a director as Eastwood as, but his reputation deserves some reconsideration. Though his 1985 Elmore Leonard adaptation Stick was overhauled by its studio, Reynolds nevertheless shows decent instincts for the scuzzy noir material, his background playing tough-talking Southerners informing its authentically cheap, grimy atmosphere. It even has one noteworthy bit of visual invention: The scene involving the falling death of albino hit man Moke was shot using a decelerator, an innovative device that, in lieu of an actual airbag, allowed cameras to film from above with the use of drag-line cables. Reynolds’s direction in that and this fun, exciting sequence from Gator suggests that he might have been a natural genre director under different circumstances.

The late ’70s and early ’80s saw the pinnacle of each actor’s box-office dominance. Reynolds’ characters Bandit—of the 1977 hit Smokey and the Bandit—and Gator define his swaggering Southern persona, while Eastwood updated the Man with No Name with the equally alienated and terse Dirty Harry. For their efforts, Reynolds was the top box-office draw in the country from 1978 until 1982. Eastwood unseated him as Hollywood’s biggest star in 1983 and 1984.

The comparisons are not merely superficial. Both Eastwood and Reynolds cultivated burly onscreen personalities, typifying manliness in an era when actors like Alan Alda offered an alternative take on masculinity. Whereas Eastwood preferred snarling stoicism, Reynolds embraced a lively onscreen partnership, drunken Tonight Show appearances and all, with the likes of Dom DeLuise. His “hick flicks” (including 1973’s White Lightning and 1977’s Semi-Tough) had a goofiness to them making his best work feel alive and current.

Even Reynolds seemed aware of the similarity of his professional trajectory to Eastwood’s. Appearing together on TIME Magazine’s cover in January 1978, under the headline “Hollywood’s Honchos,” Reynolds stated: “I think there’s a parallel in my career and Clint’s. We both have a particular audience that is loyal to us no matter what the critics say.”

After nearly two decades in Hollywood, his “Southern strategy” had allowed Reynolds to establish his own niche in movies. Finally, he was the one setting trends. In a likely acknowledgement that he needed to lighten up occasionally, it’s no accident Eastwood’s highest-grossing by inflation films are Bandit-like comedies: 1978’s Every Which Way But Loose and its 1980 sequel Any Which Way You Can. 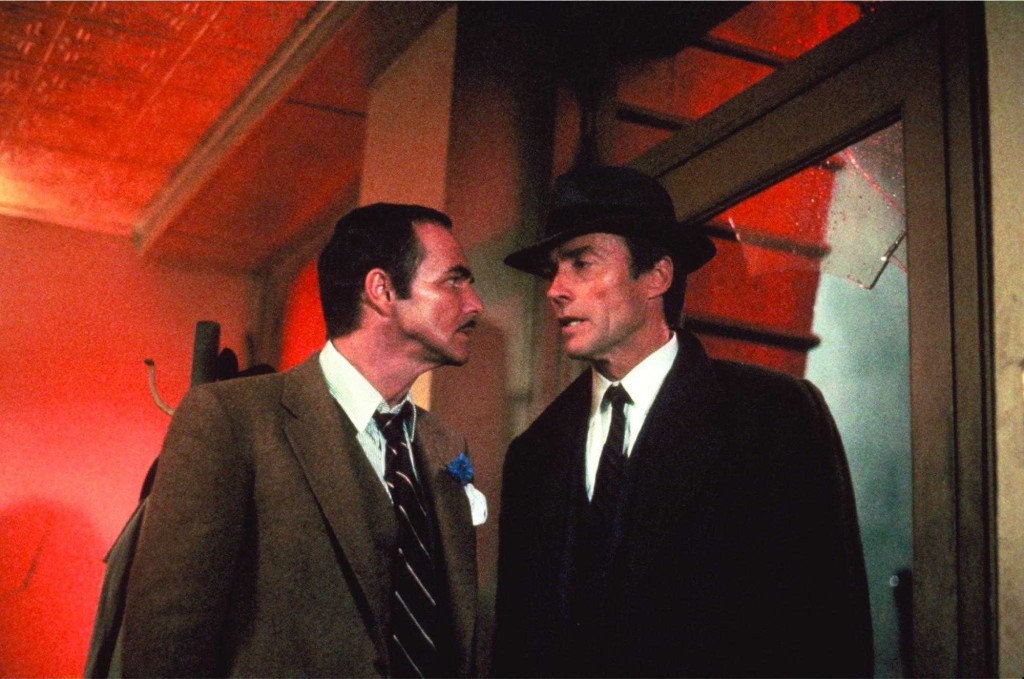 In 1984, however, the symbiosis between the two actors abruptly ended. It began promisingly: After a quarter-century spotting one another—from Universal to TV to genre pictures and mega-stardom—Reynolds and Eastwood decided to make a film together. However, City Heat underwhelmed audiences, with Reynolds faulting the film’s Prohibition setting, and suggesting he was miscast while Eastwood was allowed to coast on his usual mannerisms. (Eastwood has dismissed the film as fluff.) Worse, an accident during one of the film’s fight scenes broke Reynolds’s jaw, resulting in an addiction to painkillers, significant weight loss, and rumors he contracted AIDS. (Also, it was during this period that Reynolds turned down Terms of Endearment, which he later cited as the true turning point in his career misfortune, since flops like City Heat reinforced the conception that he was a mere movie star, not a true actor.)

The troubles following City Heat exacerbated a tabloid fascination with Reynolds, including a nasty divorce from Loni Anderson, further derailing his career. Like many stars, Reynolds developed a reputation for being “difficult,” and the public began to associate him more with his off-screen headlines than quality work.

By contrast, Eastwood emerged as one of cinema’s most highly regarded filmmakers, particularly after the critical praise for Bird (1988) and Unforgiven (1992). Reynolds attempted to rejuvenate his career, citing advice given to him by Eastwood himself: “Life is too short for you not to do the projects you want to do with the people you like.”

He finally achieved his comeback with the success of the TV series Evening Shade (1990-4) as well as an overdue Oscar nomination for Boogie Nights (1997). (Originally the frontrunner in that year’s Oscar race, Reynolds’s usual surliness, namely firing his agent for casting him in the film, undermined his campaign, allowing Robin Williams to eventually win for Good Will Hunting.) Soon, though, he was again regulated to direct-to-video schlock, with occasional roles in high-profile comedies like The Dukes of Hazzard (2005) and the Adam Sandler remake of his own movie, The Longest Yard (2005).

By contrast, the 2000s were another boon for Eastwood, during which he received seven Academy Award nominations in a four-year span, and winning two. In February 2010, Eastwood was recognized by President Barack Obama with an arts and humanities award. His honors are numerous and his latest directorial effort, American Sniper, recently became the highest-grossing film of 2014. While Eastwood can boast of receiving his own postage stamp in the Republic of Niger, Reynolds can point to both a recent superhero spoof of his infamous Cosmopolitan photoshoot, or Norm MacDonald’s revived impersonation during the Celebrity Jeopardy sketch at SNL40. 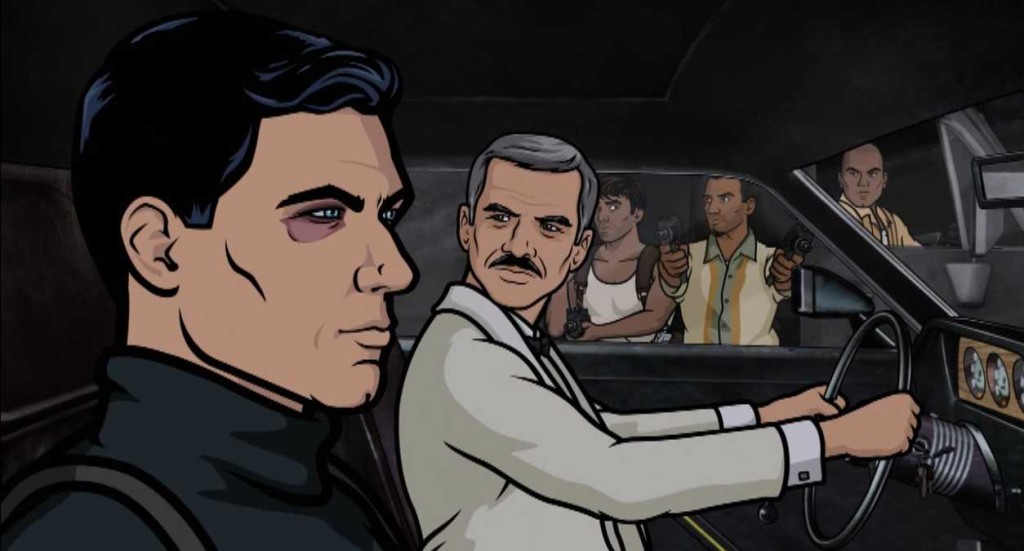 Still, the Archer episode represents a fitting tribute to Reynolds, once one of Hollywood’s most bankable stars. Despite the divergence of their careers since City Heat, both men have impressive onscreen legacies. While Reynolds may not be as overtly iconic as Eastwood, the specificity of his ’70s output—especially the modern regionalism of his hick flicks—remains elusive in today’s homogenized marketplace. Even today, the comparisons continue: Each actor has a rap song named after them; and Eastwood’s 2012 empty chair speech at the RNC demonstrates Reynolds is not alone in making embarrassing public miscalculations.

The friendship between Eastwood and Reynolds underpins the story of modern Hollywood, from the decline of the studio system and the advent of television, to the trappings of stardom in an increasingly gossip-dependent media. No one—not even the men behind Dirty Harry and Gator—is immune.