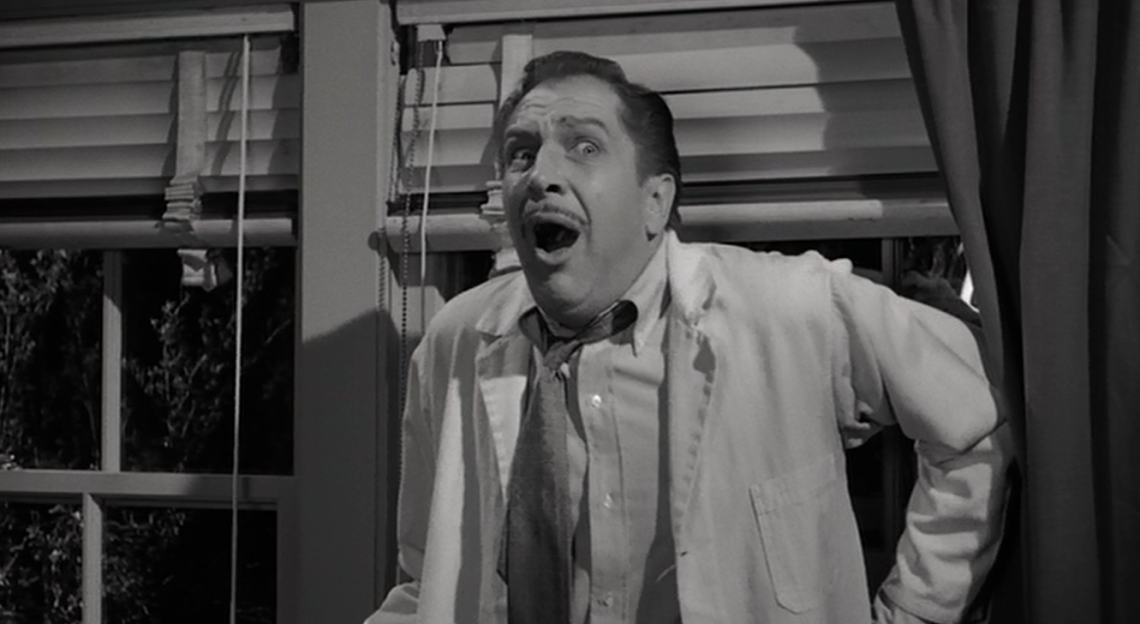 If you happen to be in the Southeastern US in February, you may have the unique opportunity to travel back in time to the heyday of cinematic sensationalism when William Castle’s The Tingler plays at The Carolina Theatre of Durham (North Carolina) as the centerpiece of their 15th Annual Nevermore Film Festival. The Tingler will play in The Carolina Theatre’s 1,000-seat historic Fletcher Hall on February 22nd, 2014, complete with some of Castle’s famous attention-grabbers.

The undisputed king of the gimmick film, William Castle was an unabashed purveyor of pulp who devised an inventive series of publicity stunts to put his bargain basement productions over with audiences. Whether it was slinging a skeleton along a string over their heads during House on Haunted Hill or rigging buzzers beneath the seats for a scene in The Tingler, Castle never met a promotional gimmick he couldn’t use. Castle also produced (and has a cameo in) Roman Polanski’s seminal work of modern horror, Rosemary’s Baby. Often considered Castle’s masterpiece, The Tingler is the blackly humorous tale of a scientist (horror icon Vincent Price) whose research into the anatomy of fear unleashes a terrifying (terrifyingly cheesy, that is) creature upon an unsuspecting world.

Bruce Goldstein, director of repertory programming at New York’s legendary Film Forum, will be presenting The Tingler in the grand old style at The Carolina Theatre, with all the original gimmickry intact, as well as a few new surprises. Mr. Goldstein recently took time out to talk with me about William Castle, doing the gimmicks, and introducing audiences around the world to The Tingler. Budd Wilkins: What was your first exposure to the films of William Castle and The Tingler in particular?

Bruce Goldstein: It’s hard to say. I actually don’t remember seeing them as a kid, frankly. I was not a big horror fan, although I read Famous Monsters of Filmland. I was in Slovenia doing The Tingler, believe it or not, and they asked me to introduce Joe Dante’s Matinee, which is an homage to William Castle, that whole era. The main character [the young boy played by Simon Fenton] is based on Joe Dante, who was a big horror movie buff, and he’s following all those movies, he’s reading Famous Monsters of Filmland, the Forrest J. Ackerman magazine. I read the magazine, but I really didn’t like horror movies growing up. My parents took me to see Whatever Happened to Baby Jane? when I was ten and it traumatized me. It probably was when we showed The Tingler at the Thalia, where I was working in the early 80s. We showed a lot of those films without any gimmicks. I started doing the gimmicks. And, by the way, the gimmicks we started doing had nothing to do with what William Castle did.

Is that a fact?

It is a fact. For The Tingler, all William Castle did, the idea for Percepto was they put in a few buzzers [under the seats]. Actually, there was a manual, a very elaborate exhibitor’s manual for The Tingler, how you were to wire your seats and everything. I’m sure most exhibitors didn’t get it or it was too expensive. When I first did The Tingler with Percepto, it was 1988. I invited Terry Castle, William Castle’s daughter, and Mrs. Castle, who was a German woman, had an accent. She saw everything we were doing, we were wiring all the seats, and she said [mimicking accent]: “Bill never went through this much trouble.” So what we’ve done was reimagine The Tingler and the gimmicks.

And how did The Tingler go over in Slovenia?

We slayed ‘em in Slovenia [laughs]. It was a great cinema too. It was a Halloween show. They were doing a marathon, and it was packed with young people. It was the Slovenian premiere of The Tingler, it had never played in Slovenia before, and it had Slovenian subtitles. The Tingler in Slovenia is a word I can’t pronounce, but it was something like Slivovitz or something. We did it in the Cinémathèque Française in [Paris], France, Tel Aviv, Dublin, Glasgow, Munich. All over the US. Vincent Price’s hometown, St. Louis, where the St. Louis Film Festival organized the Vincentennial to honor his 100th birthday [in 2011]. We did it at the TCM film festival in Hollywood. It’s the only reason anyone asks me to go anywhere. I don’t know why, I’ve done so many things, been decorated by the French government, but they want The Tingler. The reason I started doing these gimmick shows –  not just The Tingler, but other William Castle movies with gimmicks like Homicidal and Mr. Sardonicus, and other gimmick movies like The Hypnotic Eye – there was this idea in the late ‘80s when people thought that video was going to destroy the repertory theater, that people wouldn’t go to the movies, to see old movies, B movies, when they could get them at home. So I decided, “What are the things you can’t do at home? Audience participation.”

That’s right, you can’t see a skeleton flying across the theater…

I mean I basically feel that, until they invent the virtual audience, you really can’t replicate the experience of going to a packed movie theater.

Now that you’ve had all this experience showing the Castle films, what do you think about The Tingler in particular and its appeal?

I think The Tingler is William Castle’s masterpiece. He’s got everything in that. It’s not his artistic masterpiece. He actually made really good movies like When Strangers Marry, an early film noir with Kim Hunter and Robert Mitchum. And he did those wonderful Whistler movies, Columbia B movies in the ‘40s [starring Richard Dix]. I think [his use of] the gimmick was actually trying to make money, a way to exploit the burgeoning teen market, which is what Sam Arkoff [co-founder of American International Pictures] was doing. He came up with these ideas. But with The Tingler, he’s actually pulling out all the stops. It’s not just the one gimmick. I don’t know if I should reveal this, but The Tingler has a color sequence. It’s so much fun. The idea of the movie is so ridiculous, there’s absolutely no logic to this movie whatsoever. It’s all tongue-in-cheek, that’s what makes it. You know, some movies, people like to laugh at them and feel superior to them. Well, in this case, I think Castle and the screenwriter Robb White felt superior, they knew it was a silly story to begin with, and they had fun with it.

It also marks one of the first acid trips, LSD trips on film.

It’s interesting. It is the first acid trip in the history of movies and that’s quite visionary. They had already started talking about LSD in the media, but it really didn’t become what they call a household drug. That was maybe 8 years later, about 1967.

That’s when you start getting things like The Trip.

It’s very obvious it really is LSD. They repeat it several times. [The character played by Patricia Cutts] says, “Why should I consent to the drug?” And Darryl Hickman says, “It’s not a drug, it’s an acid!” And Price is reading a book that says “Effects of Lysergic Acid,” so it’s really obvious that it really is LSD.

The book title is even printed on the wrong side just so the camera can pick it up.  There‘s the color sequence that you mention. And, of course, there’s the great moment late in the film when the Tingler gets loose in the theater showing an old silent film.

The silent is Tol’able David. Actually William Castle is not the first. I don’t know if you can say he stole this idea, but it wasn’t the first time that a monster got loose in a movie theater. It had actually been done in The Blob, when the Blob gets loose in the projection room and murders the projectionist. We’ve thought about murdering some of our projectionists, but most of our projectionists now are great. Actually, the projectionists working today in this field are mostly very skilled and dedicated to a dying craft, you know, handling 35mm film. Although I don’t think The Tingler is going to be in 35, it’s going to be DCP – very beautiful, by the way, right off the camera negative. Anyway, I remember showing The Blob, and as soon as the Blob hits the projection screen, we made this big noise from the projection room and this piercing scream, which got a huge laugh. I think that’s one of my inspirations.

The thing that The Tingler has that The Blob doesn’t is that it melds the audiences on the screen and in the theater and invites the audience’s participation in this kind of breaking the fourth wall.

In The Tingler, William Castle really uses the dark [of the theater], and that’s the brilliant part. The one reason you have to show The Tingler on the big screen is because there’s a shot where he [Vincent Price] looks at the other character Ollie, played by Philip Coolidge, who was an old stage actor. He looks at him and says, “Ollie, do you think the Tingler is in the theater?” And he’s looking down at the theater audience from the big screen. It’s a wonderful moment that gets a huge response. They build the suspense in that scene, it’s really terrific, and that’s what we’re playing on. Don’t give them too much.