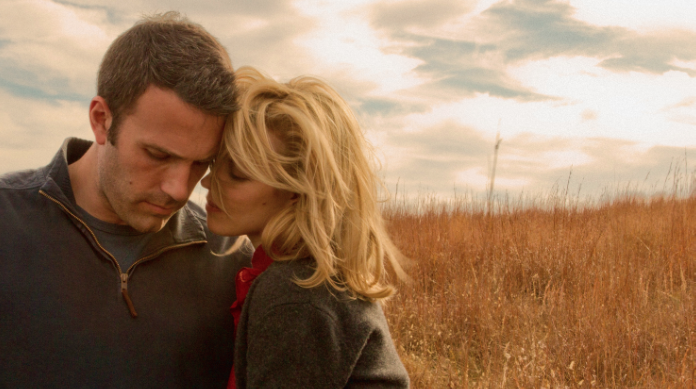 A Communion With the Self In ‘To the Wonder’

The following isn’t a review. Instead, it’s a collection of thoughts, impressions, and emotions I wanted to jot down before they disappeared into the ether. Mild spoilers, if you can call them that.

Given the disappointed reviews for Terrence Malick’s latest film, I wasn’t sure what to expect going in. I’d heard from multiple colleagues who were big fans of all of the filmmaker’s previous efforts that this was the first one they didn’t like. Dismissals ranged from “pretentious” to “self-parody”, so I lowered my expectations considerably. Malick is possibly my favorite filmmaker. I discovered him a few years back, and I’m glad it took me that long. A younger me wouldn’t know what to make of his works, particularly considering that I BEGAN with the director’s cut of The New World. But bearing all that in mind, I was ready to be disappointed by his newest effort, or at least puzzled. Malick made two films in the late ’70s, then disappeared from cinema for 20 years, only to return in the late ’90s with what I consider one of the 10 best films ever made, The Thin Red Line. Since then, he’s made only three more films, and only one per decade.

So it was a bit of a shock that he had a new film ready just over a year after The Tree of Life, with apparently two more in production and near completion. What spurred this sudden productivity and haste? Does Malick know something we don’t? An intensely private individual, there’s no telling why his work ethic has done a complete 180, and he’ll certainly never tell anyone.

With all that in mind, I sat down to watch To the Wonder with no idea what to expect from it. What I saw was something truly special, something that deserves way more thought than outright dismissal or praise. I can see why it will be off-putting to many, but after it ended, I sat there in awe of an artist at the peak of his power, who, after literally pondering the existence of God, the cosmos, and the meaning of life and death in his last film, turned completely inwards, creating a visual symphony of love, regret, and forgiveness. While The Tree of Life was a far more ethereal film, at least thematically, it possesses semblance of a traditional structure: beginning, middle, and end. With To the Wonder, I felt like I was watching a great symphony come to life before my eyes, giving the notes and movements a flow that can only be achieved in cinema. I also saw a man laying out the dark private thoughts and memories of his life all on the table, in one long stream of consciousness.

The film follows an American man (Affleck) and a French woman (Kurylenko) living in Paris, deeply in love, who then decide to move back to the man’s homeland with the woman’s daughter in tow. Their relationship begins to fall apart after her visa expires, but there’s hope of reunion. While she is gone, he rekindles a relationship with a childhood friend (McAdams), which happily blossoms until his first love returns. Their relationship is strained and tumultuous, and seems to be headed ever towards implosion. Malick allegedly spent time in Europe in the ’80s, and the film seems to be based in part on the dissolution of Malick’s second marriage at the time.

Actually, scratch that. It’s clear to me that no film this raw and open could be only based in part on a director’s life. Every moment of the film is a big, open wound, and Malick is finally letting himself heal. There’s so much pain and regret filling every frame, creating a rather melancholy tone, one of deep sadness but also catharsis. I see an artist who, like his male lead, doesn’t know how to express these things in words very well. It’s easy to tease the lack of traditional structure, dialogue, and use of voice-over in the film as being almost TOOMalick-ian, but I think there’s something far deeper going on here. I don’t think a film this personal can be done in a traditional fashion. I see a man, desperate to apologize to and reconcile with the women he failed, but he simply doesn’t know how to say what he feels, so he gives them the floor, allowing the film to focus on them, telling their side of the story.

There’s no judgement here, just a man trying to atone for his sins, both with these women and with God. A recurring motif, forgiveness is at the heart of what is on display here. Can he forgive himself? Can the women forgive him? Father Quintana (Bardem) says that Christ will always forgive, but it’s whether a someone can forgive themselves that matters in the eyes of God. And I think it’s telling that Affleck’s character is almost always on the edge of the frame, and shot from behind. Nothing Malick does is by accident, and if we’re to believe that Affleck is a stand-in for him, it’s only natural that the film would visually take place almost from his own visual POV.

I remember back in 2003, when Big Fish came out, and it was such a departure for Tim Burton, that many asked him what inspired it. Burton responded by explaining that both his parents had died recently, and that he hated psychiatrists. The film was his own personal therapy, and he felt cured of all the pain and grief afterwards. I feel that Malick is probably not a fan of psychiatric therapy either, and with To the Wonder, he’s able to achieve that sense of relief and closure that others might seek in a counselor. Towards the end of the film, the music starts to swell, Symphony No. 3 by Henryck Gorecki, as all the emotions of the characters are laid bare. In a moment of desperation, confusion, and petty anger, Kurylenko’s character had a one night affair with a neighbor earlier on in the film. Her husband is furious, consumed with rage and betrayal. But at the end of the film, he realizes that maybe she had her reasons, perhaps he’s not so noble and blameless. Perhaps his emotional unavailability was what caused the marriage to implode. As the music swells, with a narration by Quintana, who prays to Christ to make himself available, Affleck finds his wife in a room, and saying nothing, crumples before her, putting his head in her lap. He says nothing, but she knows what is happening. He’s begging for forgiveness. Forgiveness for not being the husband or lover he should have been. And she does. She’s shocked, but eventually just runs her fingers through his hair as he kneels before her, silently giving him that which he seeks.

It’s moments like this that really convinced me that I was watching something only Malick could make, something deeply personal and imperfect, like Malick shows himself to be. He’s touching on universal ideas, but really, like Burton in Big Fish, it’s his own sort of communion with himself. And I think that’s worth celebrating. Like any great symphony, To the Wonder flows effortlessly from start to finish, and after swelling to a crescendo of intense emotion, ends on a rather gentle note. “I want to keep your name.”, says Kurylenko, as she departs from Affleck’s life. Their marriage cannot continue. It’s over, but she doesn’t regret it, and neither does Malick. The love they shared is worth remembering.