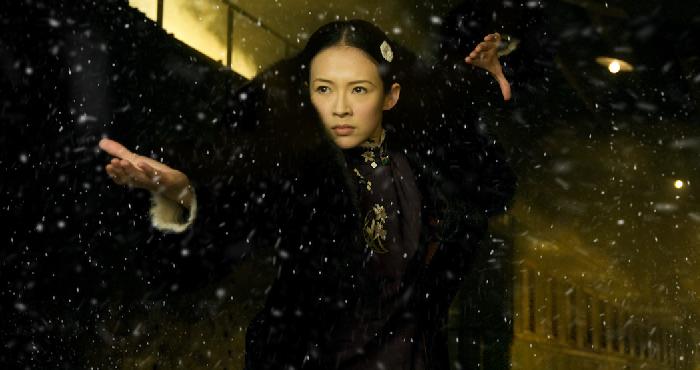 The following review is an expanded version of one that ran as part of our coverage of the Karlovy Vary International Film Festival, where a longer cut of the film was exhibited than is being released in the United States.

While it’s not necessarily a standout in either the annuls of recent kung-fu films or the celebrated filmography of its director, the first film in six years from acclaimed Hong Kong filmmaker Wong Kar-wai, about the legendary Chinese martial artist Ip Man, should nonetheless prove mostly satisfying to fans and admirers of either.

Plot-wise, The Grandmaster covers a lot of the same ground, albeit with much less of an overtly nationalist bias, than the 2008 Donnie Yen action vehicle Ip Man. Wong’s more dramatically inclined retelling begins in the mid nineteen thirties, by which time Ip, played reservedly here by Wong’s regular collaborator Tony Leung, was already well established as one of Southern China’s most respected martial artists. From there, the film expands outwards, in a sprawling non-linear web, exploring Ip’s experiences during the Japanese occupation of WWII, his relationship with the revenge-bent beauty Gong-Er (Zhang Ziyi), and his establishment in the nineteen fifties of Hong Kong’s premier martial arts school, where he would go on to earn international recognition as the man who trained Bruce Lee.

Fans of Wong’s previous films like 2046 and In the Mood for Love will certainly recognise the director’s signature visual style, a blend of elegance and opulence that extends from the immaculate details of the costumes and sets to the rich honeyed hues of the cinematography. Such lavishness extends also to the action scenes, although admittedly not always to their benefit. The choreography is spectacular – no surprise given that it was overseen by Yuen Woo-ping, known for his work on The Matrix and Crouch Tiger Hidden Dragon. But while Wong is for the most part able to let his camera capture each fight uninhibited, his occasional indulgence in slow-mo and close-ups more often than not proves distracting.

Such flourishes are in a way indicative of The Grandmaster’s central failing, in that at times it seems as though the film is not quite sure whether it wants to be an arthouse drama or an action movie – and as a result, never totally succeeds as either. Anyone after a balls-to-the-wall martial arts film would be better off watching The Raid Redemption or one of the numerous other adaptations of Ip Man’s life story. Similarly, although the narrative is certainly not un-compelling, it also feels somewhat run-of-the-mill. While the duelling storylines surrounding Ip and Gong-Er are engaging, secondary characters and subplots, such as one involving a nationalist agent known as “The Razor”, more often than not feel short-changed. Titles cards and moments of voiceover, meanwhile, are seriously heavy-handed – a problem that’s reportedly even worse in the cut being shown in the States.

Still, regardless of which version is available to you, The Grandmaster is undoubtedly worth seeing on the big screen. Certainly it is Wong’s grandest film to date – and while the trade-off in intimacy and narrative nuance isn’t quite worth it, as a sensorial experience it’s undeniably impressive.