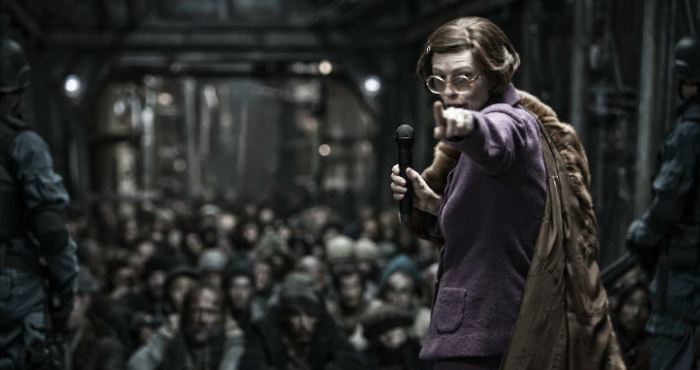 When I caught wind that Bong Joon-ho, the South Korean auteur behind complex genre masterworks The Host, Mother and Memories of Murder, had a new film coming out this year, it was enough to immediately become my most anticipated release of 2013. Bong is that kind of director; one whose films establish event-worthy expectations on announcement alone, before cast, plot or even title is revealed. In short, I could not wait to see Snowpiercer. Now, after certain recent events, I no longer plan to. At least not when it’s released in theaters.

The wait got a whole lot longer when the news broke earlier this week that Harvey Weinstein of The Weinstein Company, the film’s stateside distributor, would be omitting 20 minutes from the moody 126-minute dystopian sci-fi thriller before it hits American screens on a yet-to-be-determined date. That’s a whole Un Chien Andalou’s worth of footage, gone. In addition to the edits, a voiceover narration will reportedly bookend the film, presumably to remove all independent thought on behalf of the viewer in order to shove in its place a fistful of superfluous exposition supplied by the honeyed tones of a Ben Kingsley or Jeremy Irons type, diluting the singularity of an innovative director’s vision into a plop of dismissible mediocrity.

Now, it should be noted up front, the mouthpiece that spouted this news and inspired countless headlines the gist of which being “Americans Too Stupid To Understand Snowpiercer” didn’t come from The Weinstein Company who, along with Bong and Korean distributor CJ Entertainment, have yet to comment. It was English writer and festival programmer Tony Rayns who told Inside Film, “TWC people have told Bong that their aim is to make sure the film ‘will be understood by audiences in Iowa… and Oklahoma.’” The displeased Rayns added, “Leaving aside the issue of what Weinstein thinks of its audience, it seems to say the least anomalous that the rest of the English-speaking world has to be dragged down to the presumed level of American mid-west hicks.”

The reaction from cinephiles since the story broke was unsurprisingly a resounding “No thanks.” Thankfully the film has already been released overseas, which means the director’s cut exists and will eventually be attainable through a number of means, including a region-coded DVD, or the ever flowing pipes of the Internet. It’s only a matter of time before Snowpiercer, based on the French graphic novel “Le Transperceneige”, is available in the way Bong intended for all audiences to see it. So, while this news is frustrating, the only issue is a slight shakeup in the viewing schedule of those looking forward to it. The perk of being an impassioned cinema fanatic is that there is always plenty to tide us over in the meantime. But the real victims here are precisely the people Weinstein is allegedly – and dead-wrongfully – trying to appease: the casual viewers.

The bullheaded mogul is notorious for hacking away at films with which he has zero creative involvement, earning him the nickname Harvey Scissorhands. As Guy Lodge at HitFix points out, Weinstein took his shears to Asian imports Zhang Yimou’s 2002 Oscar-nominated Hero, Hayao Miyazaki’s 1997 Princess Mononoke, and even this year’s The Grandmaster, the latest from crossover favorite Wong Kar-Wai. American films aren’t immune to Weinstein’s scissor-happy ways either. David Lowery’s recent festival fixture Ain’t Them Bodies Saints, starring Casey Affleck and Rooney Mara, will be released this month following similar snippings.

Whether Weinstein thinks the Midwest is teeming with film-illiterate dum-dums who can’t follow what appears to be a fairly straightforward futuristic action flick (enriched no doubt by Bong’s signature characters, indelible visuals and emotional intricacy) is irrelevant. Twenty minutes is simply too much to lift out of a film that, in its intact state, has already garnered raves from critics both here and there, and opened Aug 1 in Seoul to solid box office success. If Midwesterners are in fact slow on the cinematic uptake, then depriving them of an intelligent film in its purest form is why.

When I saw The Host opening night in early 2007, I was in awe. I had yet to be acquainted with Bong and his sensibilities. My ticket was bought solely on the premise that the film somewhat redefined the monster movie. The new Jaws. While the action sequences in The Host are expertly handled – tense, rousing, unforgettable – what struck me even more was how much care and attention were paid to its characters. The extra time spent with the film’s core family is crucial in elevating The Host from middling scarefest to something much more profound and lasting. So much so that by the film’s devastating final showdown, special effects and action set pieces have already been rendered secondary to the relationships at its center. The Host runs just seven minutes shy of Snowpiercer’s uncut length, and includes not one scene fit for disposal. Shortening it would have been disastrous to the experience, which, for me, was what I imagine it was like to see Jaws for the first time 30 years prior.

This story has whiffs of the stank Terry Gilliam endured when trying to release his preferred cut of one of Movie Mezzanine’s favorite films of the 1980s, Brazil. The tug of war between Gilliam and Universal chairman Sid Sheinberg over which cut to release is perhaps the most notorious and drastic. Put off by the original’s bummer ending, Sheinberg orchestrated a barely recognizable 94-minute edit with an offensively tidy resolution. Gilliam’s 142-minute cut remains a perfect dystopian nightmare and one of the most breathlessly funny and astonishingly inventive films ever made.

It only saw the light of day because Gilliam screened the film privately for critics, an act of defiance that won him the award for Best Picture by the Los Angeles Film Critics Association and strong-armed the studio into releasing Brazil as is. While it occasionally aired on television, Sheinberg’s cut – the “Love Conquers All” version, as it is known – is so pathetic and sacrilegious that The Criterion Collection devoted an entire third disc to it in their Brazil box set. Sheinberg’s cut of Brazil is the most flagrant manifestation of what can happen when unclean hands imperiously take over.

Harvey Weinstein’s job is to put butts in seats. The filmmakers’ job is to keep those butts put. If Bong’s films have proven one thing, it’s that he knows how to treat an audience. Weinstein claims he only butchers films out of his love of movies. If that were true, he’d leave them alone. The best, most memorable films are the ones that take us by surprise. The ones that teach us something new about ourselves, that show us something we couldn’t have possibly fathomed otherwise. Weinstein is working from a disingenuous, greedy place.

Snowpiercer, according to Scott Foundas of Variety, is “an enormously ambitious, visually stunning and richly satisfying futuristic epic” with a cast that includes Chris “Captain America” Evans, Alison Pill, Ed Harris and Tilda Swinton. That recommendation, along with its stunning trailer, should be enough to sell Snowpiercer to the same American viewers who paid in droves to see Man of Steel, The Wolverine and Pacific Rim. Once the tickets are bought, what does it matter if Snowpiercer spends a bit more time flaunting moments of intellectual or emotional potency? By the way, all three of those films are as long or longer than the international cut of Snowpiercer.

By the time Snowpiercer reaches midwestern theaters, it’s unlikely anyone interested in seeing the film will be aware of this controversy. An opening voiceover narration may not bother certain viewers as much as it does me. They may not find it as condescending and lazy, but if they do, it’s not at the expense of Weinstein’s reputation, but Bong’s. If Weinstein’s cut of Snowpiercer were my introduction to Bong’s body of work, I’d be hard-pressed to seek out his other titles, or to even invest in the one I’d paid to see. Weinstein’s horning in on a film that’s already been completed meticulously and lovingly risks narrowing the scope and individuality of a vision as imaginative and singular as Bong’s. Let the film breathe. Sometimes it’s the quieter moments that speak loudest.