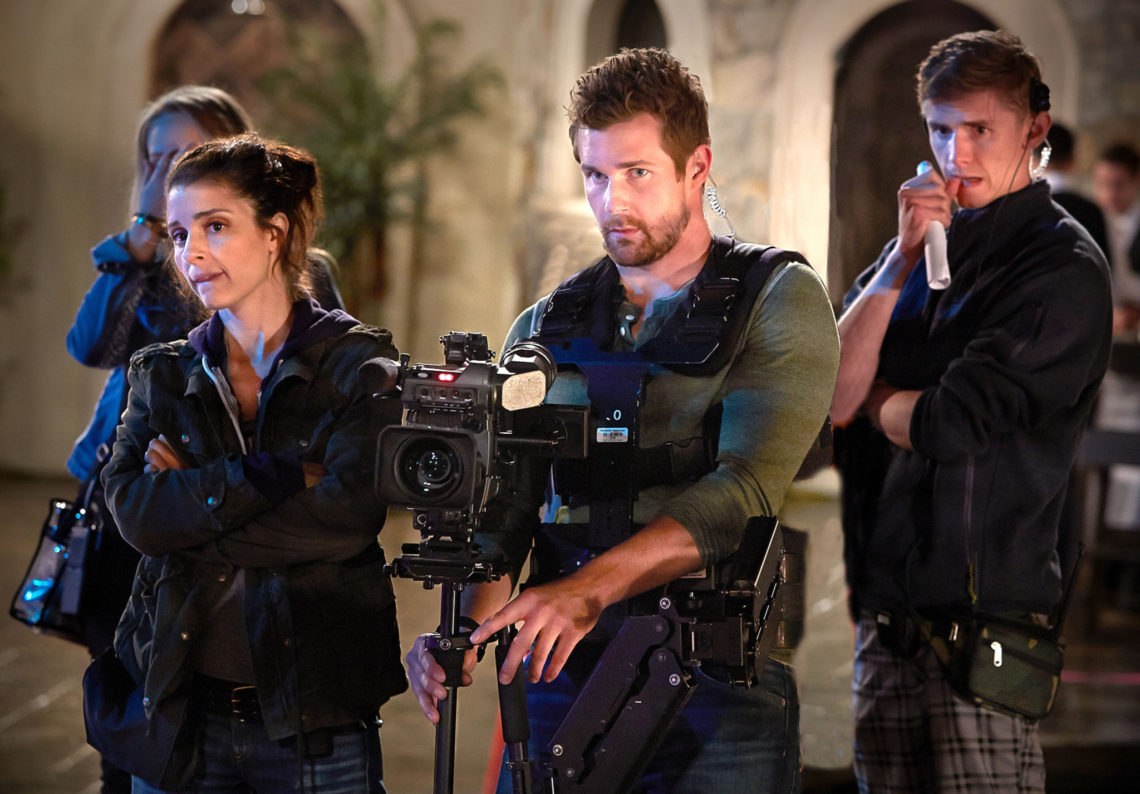 The Price of Fame: On “UnREAL”, “Sunset Boulevard”, and More

Valerie Ettenhofer talks about the new season of "UnREAL" in the wake of its finale, and how it relates to "Sunset Boulevard" and "Sweet Smell of Success."

Hollywood has been telling its own story to varying degrees of success since the first film gossip column was created over a century ago. Audience preoccupation with stories of “the industry” may have begun as a case of national rubbernecking, but it’s evolved into something more complex. Unpleasant human desires and shortcomings seem safely distant when played out in a far-off land of excess, while caustic films like Sweet Smell of Success and Sunset Boulevard allow audiences to accept cynical philosophies when presented with a sheen of showbiz glitz. While the dark side of the film industry is a favored topic on the big screen, few television series have succeeded at capturing the American culture of fame in all its stomach-turning glory.

The first season of UnREAL, Lifetime’s surprise critical hit which concluded its sophomore season this week, was very good television about fame. Created by Marti Noxon and Sarah Gertrude Shapiro, the series’ setup was simple but rewarding: UnREAL follows the cutthroat and consistently dramatic backstage workings of a Bachelor-like reality show called Everlasting. As with actual reality TV, the first-season fairytale set of Everlasting was host to a menagerie of large personalities, from manipulative HBIC Quinn (Constance Zimmer) to frustratingly charming tabloid cad Adam (Freddie Stroma), to an assortment of female contestants whose on-screen personas only allowed them to share a fraction of their full selves. At Everlasting’s brittle, untended heart stood Rachel Goldberg, embodied nimbly by Shiri Appleby as someone who was simultaneously strong and fragile, impulsive and calculating. Rachel was a talented producer whose emotional and psychological problems were a bundle of raw nerves anticipating provocation. 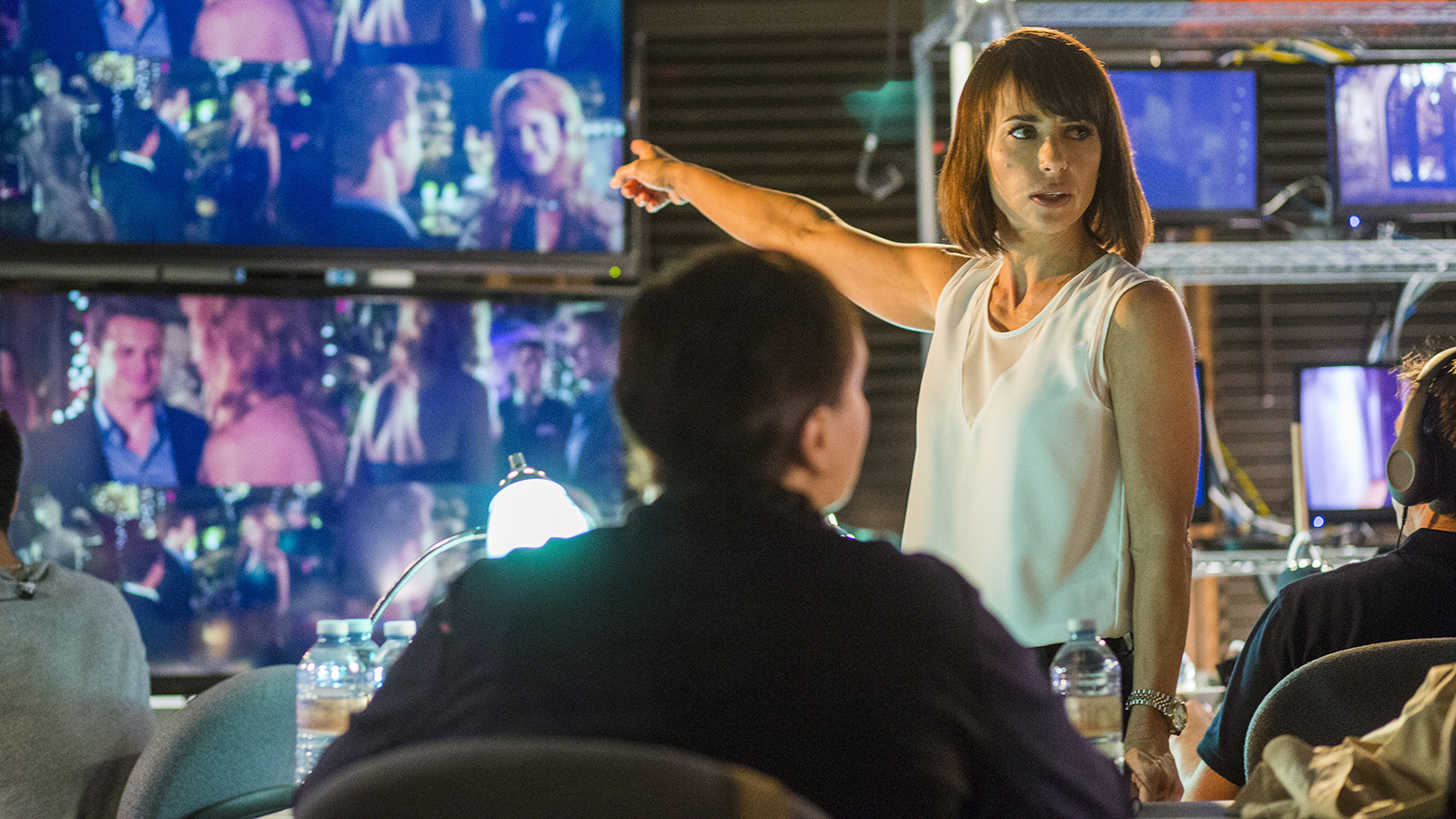 UnREAL’s first season highlighted all of the benefits of letting a poisons-of-show-business story play out on TV. The show regularly resisted nuance in favor of provocative storytelling, portraying reality TV contestants as no better (and often worse) in the eyes of producers than prized racehorses, existing to be made up, directed, and bet on with little regard for personal well-being. At its best, the show was propelled forward by the competitive nature of its show-within-a-show, and through carefully constructed plots–suicide, closeted sexuality, suitor/crew romance–which sidestepped disbelief by examining the disturbing results of emotion-as-commodity through biting scripts and smart character-building.

These accomplishments make the show’s disjointed, soap-operatic second season all the more disappointing. In its attempt to say something about the Hollywood machine (a “something” that’s as ill-defined as Rachel’s oft-referenced dream of telling a story “that matters”), UnREAL lost the sense of coherence it once had. Male characters were suddenly written as little more than clueless, dangerous pains-in-the-ass, which briefly seemed like an interesting if nightmarish reversal of the Manic Pixie Dream Girl trope, until most of the women were thrown by the wayside as well. New contestants who initially seemed empathetic inexplicably became catty and shallow days after witnessing a tragedy, and remained one-note to the thoroughly underwhelming end. When a childhood trauma comes to light, showrunner Quinn abruptly and unconvincingly switched from Rachel’s frequent abuser to her only supporter, while Rachel, who began the pilot with a shirt bearing the phrase, “This is what a feminist looks like,” grossly embarrassed another woman on camera out of jealousy. Additionally, this season was plagued by random hookups, outlandish scenarios, and a consistent lack of realistic consequences. (Remember when Chet stole a baby? Neither does the show.)

A small handful of ideas echoed the ambition and socially conscious tune of the first season, though none were handled with as much care or follow-through. In one scene, Rachel, hollow-eyed, privately documented the bruises an ex-lover left on her arm through cell phone photos; at this point, the varied and statistic-accurate portrayals of violence against women may be the show’s strongest merit. In another (controversial, arguably sensationalist) episode, a tense traffic stop involving two African-American men came soon after characters had discussed the Black Lives Matter movement, and the scene’s escalation and resulting police-involved shooting felt both horrifying and, within context, inevitable. These moments, which the show swiftly moved on from with little resolution, hint at a greater story that UnREAL is incapable of telling: one that understands that, for all its glamour and self-obsession, Hollywood is an ideal setting for tough contemplations of identity. 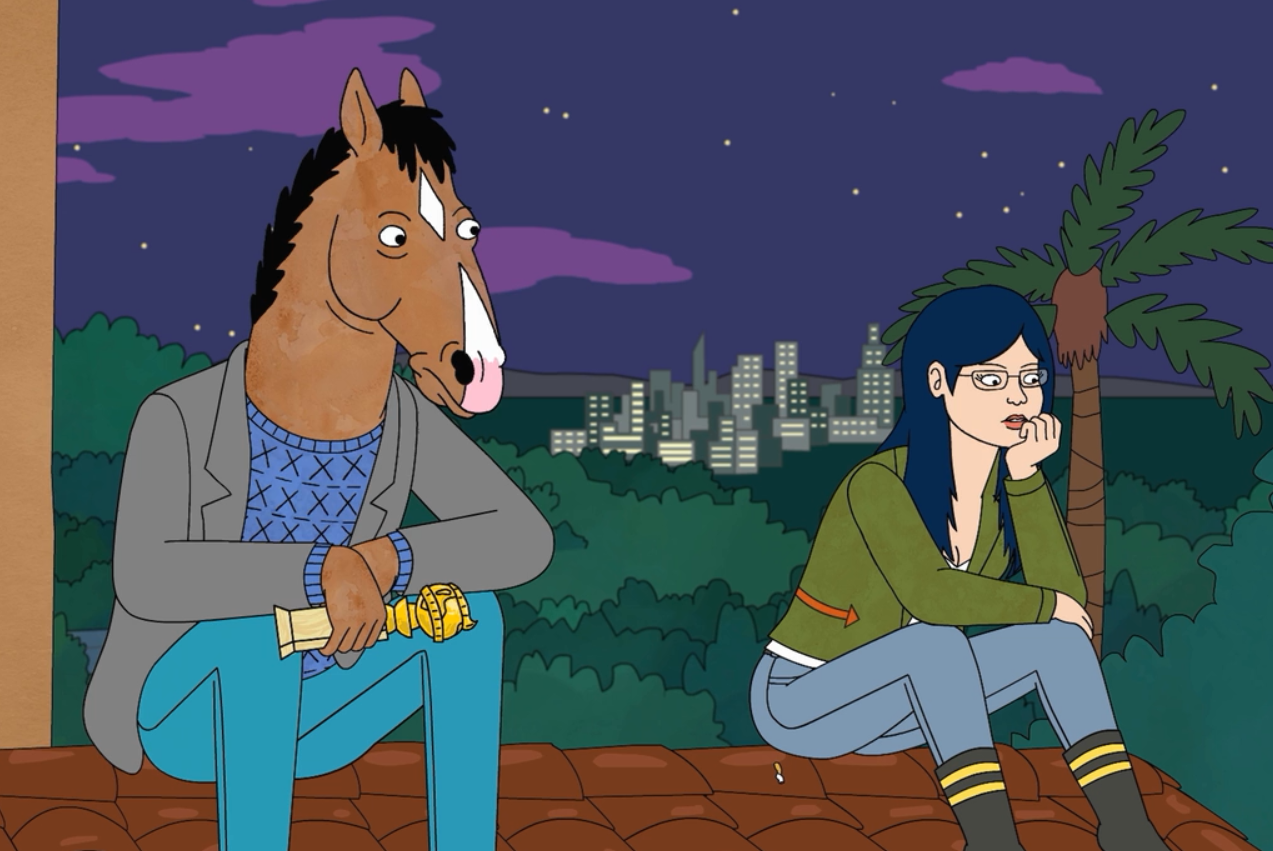 The sentiment that acts as an undercurrent through UnREAL and countless show business-centric films can be summed up by a quote from another grim show about Hollywood. During a scene in BoJack Horseman, Netflix’s insightful, at times overwhelmingly sad meditation on the nature of celebrity, the washed-up titular character asks a colleague if he’s a good person deep down. She answers, “I don’t think I believe in deep down. I kind of think all you are is just the things that you do.” BoJack’s philosophy of worth compiled through action is one that carries over into UnREAL, a show whose often hypocritical characters beg the question of how much, if at all, intention matters.

Both series (along with FX’s The People vs. O.J. Simpson, which may solidify 2016 as the year of TV being directly concerned with the perils of fame) also address the construction of self that occurs most blatantly in Hollywood, a place where modern celebrities cultivate images and curate personalities through sound bites and social media. BoJack creator Raphael Bob-Waksberg weaves together comedic and dramatic commentary on the persistent (yet ultimately unsustainable) falseness of Hollywood, creating one insightful scenario after another with a more relaxed touch than UnREAL’s recent heavy-handed approach. One season a character dated a man who is actually three boys disguised as an adult in a long jacket, their fake persona masked by inexplicable charm in a goofy send-up of superficial showbiz friendships. Most recently, a teen idol highjacked a main character’s own abortion story, assuming her new role as the face of the pro-choice movement would cause a spike in album sales; here the construction is neither accidental nor subconscious, but a calculated, agreed-upon strategy. Questions of useless intention and constructed identity loom large over the classic films which likely inspired UnREAL’s bitter streak, each of which addresses the topics with more finesse and skill, and all of which are worth revisiting in the wake of the disappointing finale.

Alexander Mackendrick’s Sweet Smell of Success, a master class in meanness that one critic directly compared to UnREAL, features a character who wrote the book (or in this case, column) on creating false personas. J.J. Hunsecker (Burt Lancaster) is an intimidating celebrity columnist, a man who deals in blackmail and sabotage and whose only soft spot is for his sister Susie (Susan Harrison). If demanding Hunsecker is a prototype for UnREAL’s Quinn, Tony Curtis is his Rachel as morally compromised press agent Sidney Falco. Hunsecker paints press agent Falco as, “A man of forty faces, not one, none too pretty and all deceptive.” Like Rachel, Falco has a desperate talent for exploiting the worst in people. He also has an almost imperceptible hero streak that appears during the film’s climax. After the men’s meddling leaves Susie despondent and alone, Falco makes what may be the only honest decision in the film, stopping her from committing suicide in her apartment bedroom. His action is immediately misinterpreted and his good intentions made null as Hunsecker beats him and hands him over to a corrupt policeman. 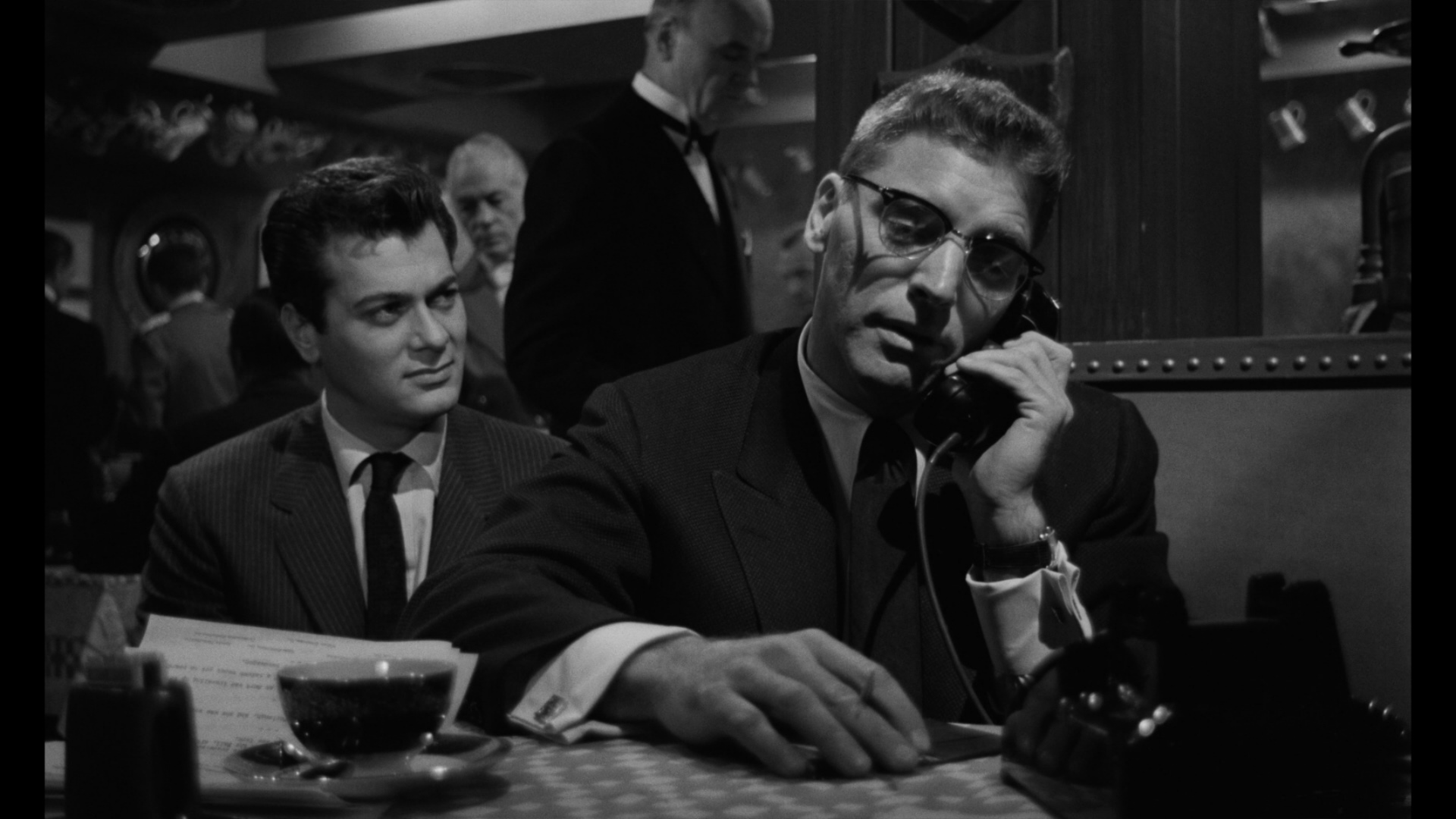 The film’s ending is bleak, but perhaps its allowance of a bittersweet, unresolved conclusion is what makes it memorable where UnREAL has become forgettable. The latter’s first season ended soon after a manipulated woman did succeed at committing suicide, and left viewers with a protagonist whose moral qualms had all but faded. If the series were limited-run, this would’ve been a harsh but satisfying modern take on Mackendrick’s “cookie full of arsenic” vision of fame. Instead, it was a jumping-off point for a series of increasingly over-the-top tragedies, the greatest of which was the show’s failure to live up to its classic inspiration.

Sunset Boulevard, Billy Wilder’s darkly comic 1950 film about a past-her-prime silent film star and the screenwriter she attempts to ensnare, acts as an effective antidote to the second season of UnREAL even as its twisted psychology serves as a touchstone for its fame-crazed characters. At the film’s start, protagonist Joe Gillis (William Holden) promises to give audiences “the whole truth” before “those Hollywood columnists get their hands on it.” We’re introduced to Norma Desmond (Gloria Swanson), whose deluded sense of importance drives most of the film’s action and ultimately leads her to murder Gillis. Norma’s wide-eyed frenzies convey a break from reality, indicating that, despite Joe’s claims of honesty, she may not know the truth of her own obsolescence. When Norma finally reclaims the spotlight that she thought rightfully hers by taking on the role of murderess, her pose for the press feels like the final piece of a tragic portrait falling into place. Sunset Boulevard is more than a Hollywood murder tale: it’s an unsettling commentary on the drawbacks of attention and expectation. The pressure of life in the spotlight (or worse, the threat of life without it) is also palpable across the board on UnREAL, but compared with anything outside the daytime soap circuit, the cracks from this pressure manifest in ridiculous, unpredictable ways. When a minor character from the show appears in the finale to admit that he’s committed a double murder to protect Rachel and Everlasting from ruin, his instability feels random and, like so much else this season, rings false.

UnREAL, BoJack Horseman, and the best films about fame are all most successful when they concede an uncomfortable truth: despite the barriers of fiction and fame, the problems portrayed are far from unreal, and aren’t reserved for the stars alone. BoJack’s who-cares persona is constantly broken down by moments that reveal that he does care quite deeply about the way others perceive him, and his vulnerability is organic and relatable. Additionally, Sweet Smell of Success’ sense of inherent injustice and Norma Desmond’s barely-contained dissatisfaction can both be understood by anyone who has felt slighted or unwanted, regardless of their profession. These emotions might feel safe when they’re applied to wealthy, famous people, but their presence is vital to the uneasy appeal of dark Hollywood stories; if fiction is escapism, these films and shows are ruthless self-examination disguised as escapism. UnREAL (which was renewed for a third season ahead of its second season premiere) suffers from an ironic failure to commit to even a semblance of reality, a failure that has led to a loss of emotional resonance and a nosedive in quality. The show must go on, but there are better things to watch.