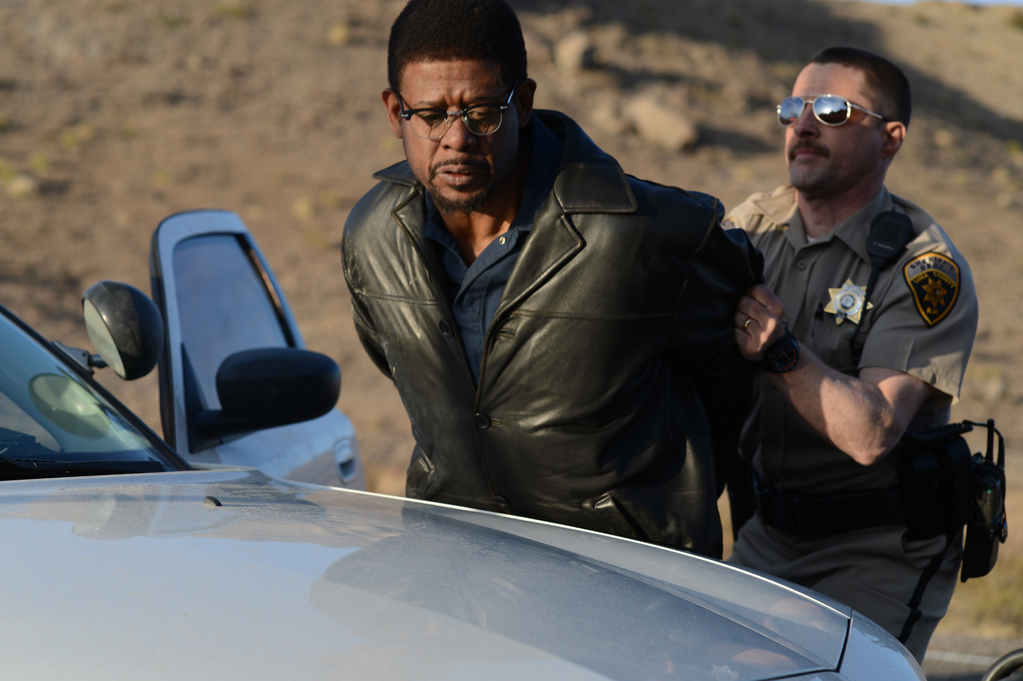 Frustratingly close to being something very special indeed, Rachid Bouchareb’s Two Men in Town boasts a painterly visual sensibility and some of the more nuanced performances this killer cast has delivered in quite some time. The mood of the film is deliberate and hypnotic, conjuring the queasy sense of a community heading inexorably towards disaster. If only it had a screenplay to match, we’d be talking about a small classic.

Based on a 1973 French film starring the dream duo of Alain Delon and Jean Gabin, Bouchareb’s remake is headlined by Forest Whitaker as William Garnett. Paroled after 18 years in prison for killing a deputy, Garnett converted to Islam during his sentence and returns to his podunk New Mexico border town with a contrite heart, fully intending to start over and live a decent life this time. Gifted with a snazzy new suit by a jailhouse cleric, he wears it almost everywhere he goes – as if dressing the part of a model citizen to announce his pure intentions.

But the local sheriff ain’t buying it. Played by Harvey Keitel with a relaxed swagger and cornpone charm, Bill Agati didn’t get elected to five terms by sitting around waiting for bad things to happen, and nobody’s gonna tell him that a leopard can suddenly change his spots. From the moment Garnett gets back to town, Agati is lurking over his shoulder at every turn – taunting and insinuating the worst with Keitel’s classic, twinkly-eyed menace. The movie never mentions race, because it doesn’t have to. The image of Whitaker, in his skinny black tie and Malcolm X specs, loomed over by Keitel in with his shiny gold star and blinding white hat says a thousand words.

Garnett’s got an ally in his plucky parole officer (the wonderful Brenda Blethyn) who’s new in town but awfully adept at maneuvering her way around the bluster of violent men on both sides of the law. It’s a delightful turn, and Bouchareb takes special care to show her hanging out at home, listening to old French music while knocking back a beer and cleaning her gun. I loved this lady.

It’s always one step up and two steps back for Garnett. Two Men in Town calmly and without comment presents the everyday indignities – routine searches, social stigmas, and miniscule job opportunities – faced by ex-cons. The vast landscape shots become a cruel joke when contrasted with the circumscribed limits of his new life. This a tough enough row to hoe even without that smiling sheriff hanging around all the time just waiting for you to screw up.

Whitaker is remarkable at conveying the character’s anger. Fussily flashing a false smile and carefully choosing his words, Garnett is always auditioning – agonizingly aware that one slip will land him right back in the stir. Listen to how his voice seems to naturally drop an octave when he runs into his old drug buddy (Luis Guzman) and you’ll see the strain it takes for him to put his best foot forward. A late-movie scene opposite Ellen Burstyn is a marvel of withholding on both sides, devastating in its power.

Which is why it’s such an awful shame that Two Men in Town crashes and burns so badly in the third act, abandoning the most interesting supporting characters and foregrounding an underdeveloped love interest (Dolores Heredia) who’s been hanging around the margins as an obvious plot device. The violent climax –perhaps unwisely teased before the opening credits– erupts out of nowhere, denying us even the reactions of folks the film has previously taken considerable time with. The rhythms are suddenly all off, as if Two Men in Town had its final reel hacked down to meet a contractually obligated 2-hour running time.

This is the kind of ending that leaves you wondering what happened, and wishing for the movie it almost was.