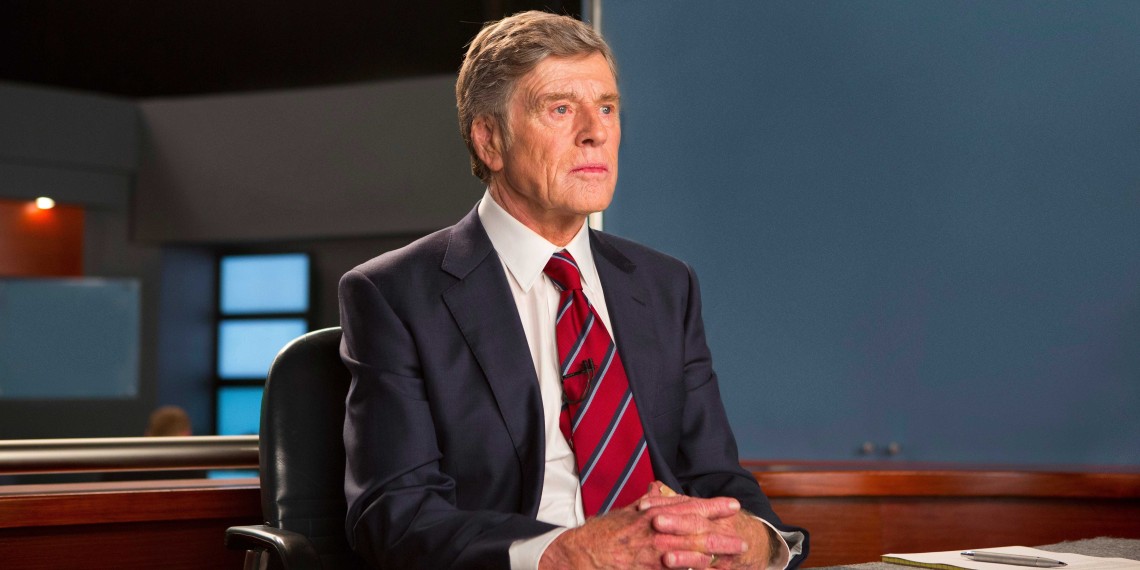 The public could stand to have a better idea of actually went on with the 2004 60 Minutes scandal over George W. Bush’s military service record. The sequence of embarrassments centered around the news program’s story, released just two months before a presidential election, which questioned whether Bush received preferential treatment during his time in the Air National Guard during the Vietnam War. Key evidence in several damning memos supposedly written by Bush’s commanding officer was not adequately verified before the story went to air, causing the then-burgeoning conservative blogosphere to viciously question its accuracy. The furor handily distracted from the fact that Bush’s war record was still fully in question. Veteran CBS News anchor Dan Rather (Robert Redford) resigned over the affair, while other journalists were fired, including 60 Minutes producer Mary Mapes (Cate Blanchett), who’d led the investigation. Mapes’ memoir Truth and Duty: The Press, The President And The Privilege Of Power forms the basis for the screenplay of Truth.

In the long madness of Bush’s America, when Fox News was a practical mouthpiece of the establishment and not a frothing voice on the sidelines, this incident was the premier proof of the devious liberal slant of the media. The idea that honest journalists made mistakes was scorned. The idea that a changing media landscape, populated by people struggling to figure out how to attract attention in a society rapidly evolving, thanks to the Internet, might rush honest journalists into such mistakes was not much acknowledged. Truth, though, takes the very odd stance that Mapes and her team did nothing wrong, that even not authenticating the Bush memos was merely a lack of ass-covering leaving them open to attack, rather than a serious failure to perform their jobs.

It’s not even a matter of the movie going against reality; the characters’ actual actions seem at odds with how the film wants to sell said actions. If you go in knowing the story, then everything about the first half seems obviously set up with the intent that the audience will recognize the mistakes Mapes and co. are making. Instead, the back half, in which the characters scramble to defend themselves, is almost entirely on their side. But Mapes’ vociferous claim that they did not go into their story hoping that the revelations about Bush were true seems suspect in light of the fact that this is exactly how the actors play their motivations during the investigation.

But then, Truth’s script is an embarrassing piece of shit anyway. It’s so dedicated to spelling out what the movie is about that it might as well be a series of digital readouts emblazoned with key talking points, like an idiot bizarro Jenny Holzer piece as cinema. In a jaw-droppingly terrible scene, Mapes’ teammate Roger Charles (Dennis Quaid) explains her backstory to Mike Smith (Topher Grace), describing how her father would beat her as a child whenever she dared question him. “You mean,” asks Smith gormlessly, “she got beaten up for asking questions?” To the movie’s credit, he does not continue, “Just like what’s happening now, in her work as a journalist?” But then, that kind of let-me-spell-it-out-for-you-ness does make its presence in a later scene, in which Smith delivers a boring, non-sequitur rant about the corporate media.

Blanchett is good as Mapes, better than Truth deserves. If there’s anything worthy in the film, it’s her embodiment of a woman enduring endless degradation (no small amount of which is infused with misogyny) for crossing the post-9/11 media party line. The rest of the cast is filling space, a lineup of talented character actors given little to do besides deliver or receive exposition–the best example of which is Elisabeth Moss, who is present and literally there for nothing else. And Redford’s Rather is a hilarious bore, a figure of reverent awe who is never anything but saintlike, and whose ultimate resignation is portrayed as a fittingly religious martyrdom. Rather’s career died for our sins and Mapes’ mistakes. Shame on us, says Truth. “Fuck off,” says I.

2 thoughts on ““Truth” Is Just Embarrassing”