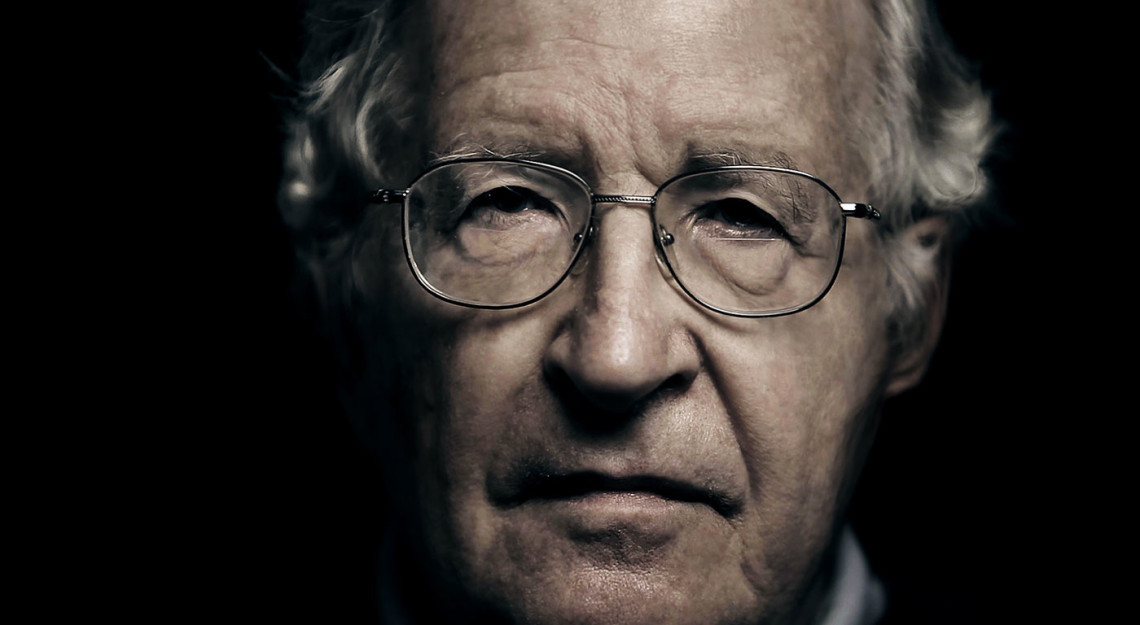 This Week’s Cinema: On Noam Chomsky and Yitzhak Rabin

This week, Mallory Andrews reviews "Requiem for the American Dream" and "Rabin, the Last Day."

In reflecting on the week’s theatrical offerings, it’s not a surprise that thoughts drifted to Donald Trump’s increasingly ludicrous presidential run. Of course, “ludicrous” is too gentle a word to describe Trump’s popularity among a certain sector of mostly white Americans, who have openly embraced his racist, sexist, and overall poisonous rhetoric.

As the Republican ticket circles the drain, one almost gets the impression that Trump is now trying to do whatever he can to dismantle his own campaign without having to actually quit. Sarah Palin’s nonsensical Trump-stump-rap endorsement bid, like a kind of deranged attempt to tap into the popularity of Broadway’s hip-hop/politics mash-up Hamilton, seems to have done little to stem the tide. And in the most recent of his oratorical crimes, Trump told supporters in Iowa that he “could stand in the middle of Fifth Avenue and shoot somebody” without losing any votes. The statementis unsettling for two reasons: 1) a presidential candidate in 2016 would openly make such a claim, and 2) in our increasingly dystopic reality, it could turn out to be true.

Thus, the topic-du-jour among a concerned citizenry regarding Trump’s candidacy has become “How did we get here?”, and most pressingly, “Can it be stopped?” It is oddly fortuitous that two documentary (or doc-inflected) films are being released this week that add some food for thought to the current trends of social and political extremism. Peter D. Hutchinson, Kelly Nyks, and Jared P. Scott tag-team Requiem for the American Dream, in which Noam Chomsky breaks down the unbalanced distribution of power and wealth in America. And Amos Gitai’s slow-burn docu-drama Rabin, the Last Day chronicles the final moments and immediate aftermath of Israeli Prime Minister Itzhak Rabin’s assassination in 1995.

We are currently living in one of the worst periods of economic inequality in American history, Noam Chomsky tells us in the opening moments of Requiem for the American Dream. This consolidation of wealth and influence in the top percentile of the population is dependent on the destabilization of democracy. This is the central thesis of Hutchinson, Nyks, and Scott’s documentary, which takes the form of a feature-length conversation with the 87-year-old American intellectual.

It’s a formal exercise that resembles Errol Morris’ Robert McNamara-centric The Fog of War (2003), if only superficially. Where Morris interrogates, Requiem’s directorial trio allows Chomsky to lecture on his “10 Principles of Concentration of Wealth and Power”, which has the effect of a long-winded essay film—like many movies that build lists or chapters into their structure, much of the runtime is spent wondering how many principles are left to go. Other familiar elements are borrowed from Morris’ film, from the Philip Glass-esque score to busy street scenes rendered in slow-motion photography. It’s a surface application of The Fog of War’s style with little understanding of what made those things work so well in Morris’ movie. For Morris, these tactics were another form of interrogation, a way to reveal discrepancies in McNamara’s testimony. For Requiem it’s merely illustrative. It’s only rarely visual interesting and lacking in that compelling tension between filmmaker and subject.

But in the midst of this too-slick mimicry are Chomsky’s words. Especially cogent is his observation that the often tossed-off epithet “anti-American” as an undesirable trait is a symptom of totalitarianism. That a populace would be socialized to believe reasonable criticism of one’s government is tantamount to a treasonous act is a harbinger of darker times. It’s all important stuff, but if the intention is to galvanize a sleeping public, perhaps a less tedious piece of filmmaking would have done the trick. 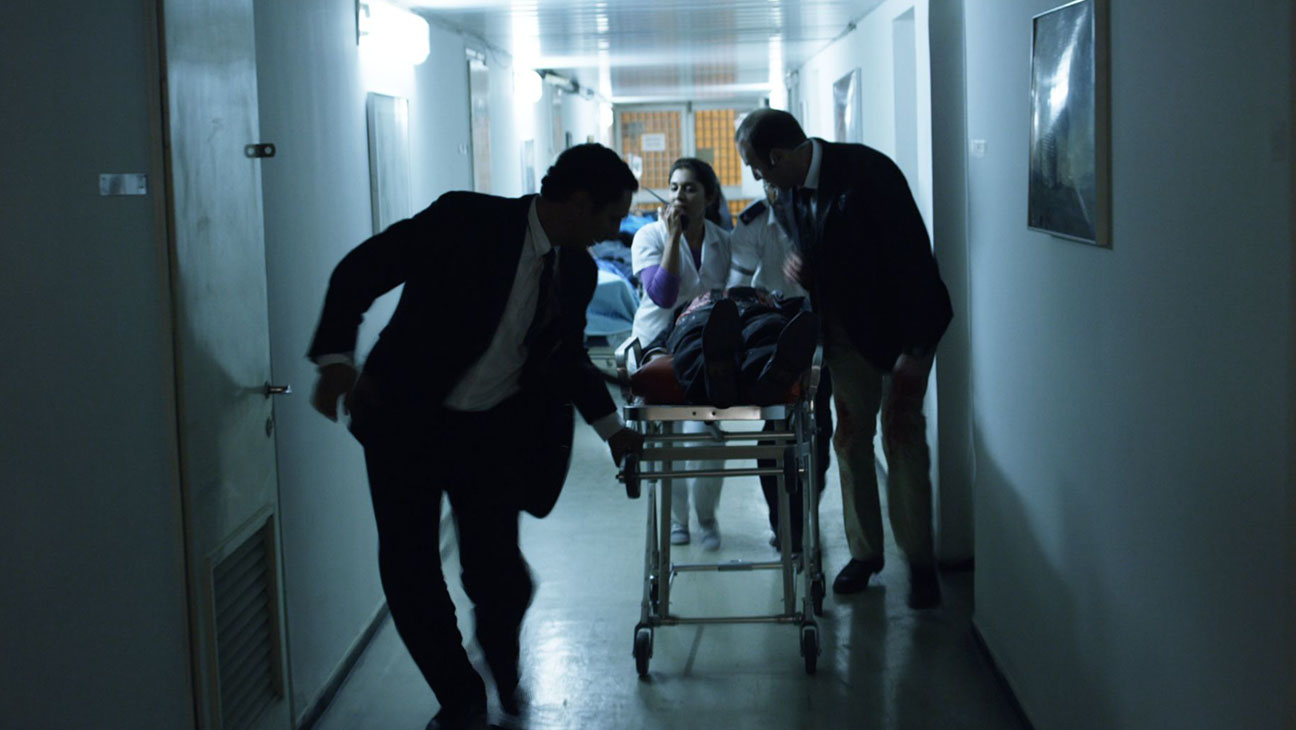 Speaking of tedious, at 153 minutes, Gitai’s Rabin, the Last Day is a significant investment. It’s a deliberately paced mix of archival footage and dramatic re-enactments that depict the final moments of Prime Minister Rabin’s life, the capture and interrogation of his assassin Yigal Amir (Yogev Yefet), the legal proceedings that took place in the aftermath of the crime, and the events that led up to Rabin becoming a target for Israeli ultranationalists. Like Gitai’s previous efforts, his re-enactments often unfold in long takes, following characters as they enter and exit rooms or pausing on faces to register reactions. It’s a gambit that only works intermittently. The courtroom procedural elements and Amir’s interrogation are riveting (the latter due to Yefet’s undeniable on-screen charisma), but other scenes are undone by poor TV-movie level acting.

It’s in the exploration of broader social concepts that Rabin, the Last Day works best. Rabin’s signing of the Oslo peace accord, and his ongoing cooperation with the Palestinian Liberation Organisation, made him a pariah among Jewish nationalist organizations in Israel. The film methodically recounts the tensions that arose in the wake of Rabin’s negotiations to withdraw from the West Bank. Seen as a betrayal of Israeli’s rights to the territory, Amir invokes the notion of din rodef or the “law of the pursuer”: a traditional Jewish law that states that a murder may be justified if the intended victim is seen as a mortal threat.

Days ago, Noam Chomsky claimed to the Huffington Post that the GOP are “literally a serious danger to decent human survival.” Hyperbolic, perhaps, but considering a pair of films that explore the imbalances of power and the extremism that such attitudes can inspire, it could very well be a frightening vision of the future.