Few Hollywood films, past or present, are as savagely subversive as Paul Verhoeven’s RoboCop. Released in 1987 at the (then) height of commercial excess and populist blockbuster entertainment, the film’s outlandish one-word premise and over-the-top sci-fi gunplay is merely the shiny silver exoskeleton that encases a brazen, darkly comedic satire, one that aims its barrels straight at corporate America, their media lackeys and a public desensitized to violence. A first-rate action flick full of smart, resonant ideas, the film remains a timeless piece of popcorn cultural sabotage, and a testament to the Dutch-born director’s talent for taking the piss out of the system – and the country – in which he was so successfully working. (I’ll save my thesis on the masterpiece that is Showgirls for another time.)

But this is Hollywood, and there are no sacred cows. So Detective Murphy is back on the assembly line, with rebooted software and a Batman inspired paint job. If the very premise of a RoboCop remake wasn’t odious enough, a PG-13 rating and ignominious February release date seemed to all but confirm that this would be just another glossy cinematic grave robbery, one with slim chances of even being entertaining, let alone remotely insightful. Shockingly, it manages to be both. Updating the premise and themes of the original, this sleek new model, although lacking Verhoeven’s audacious black humour, has brains beneath its metal skull.

Making his Hollywood directorial debut, the man at the controls is Brazilian José Padilha. Best known in his home country for the two Elite Squad films about the ongoing Rio drug war, Padilha is no stranger to heavily politicised action movies, and exhibits few qualms about aiming his sights at American institutions. First on the hit list: the biased news media, embodied by Bill O’Reilly-esque commentator Pat Novak (Samuel L. Jackson). An overpowering figure preaching bile to his TV audience, clips from Novak’s program divide and bookend the film, offering a cynical perspective on the future of journalism, while also allowing for some convenient narrative exposition.

Novak’s big talking point is drone technology, which by the film’s 2028 setting has evolved into massive, heavily armed battle droids (the same iconic ED-209 as in the original, although CGI has replaced stop-motion). In order to demonstrate their effectiveness, Novak cuts to a live report from “sunny Tehran”, where the machines perform random security sweeps on people pulled from their homes. “These people are happy to cooperate” Novak asserts, wilfully ignoring the resentful, beaten-down looks on their faces. He’s right about one thing though. These robots are effective. We see that first hand just moments later, when they annihilate a group of armed aggressors. That one of them is a child brandishing a kitchen knife makes no difference to a machine. 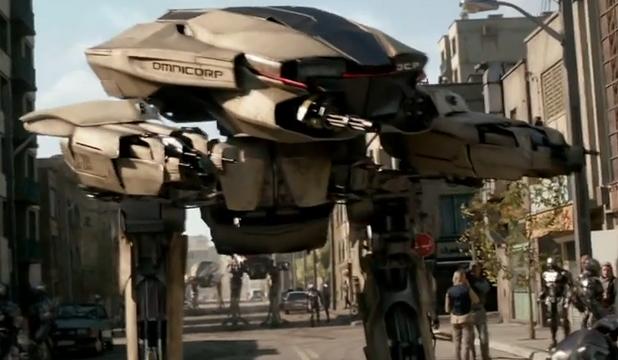 It’s a brutally pointed way to the open the film, and strikes purposefully blunt contrast with same machines comically violent malfunction in the original. But even more disturbing is the way Novak so smoothly cuts away from the scene, refusing to allow even the death of a child to spoil his agenda. Instead, he cites it as a perfect example of how the robots keep American soldiers safe (calling to mind the politic rhetoric surrounding events like Operation Iraqi Freedom or the NATO bombing of Yugoslavia, in which dead civilians were considered acceptable “collateral damage” if it meant preventing American casualties). Novak then pushes on to his next point: why not use these robots in law enforcement back home?

Certainly, the machine’s manufacturers at the forebodingly named OmniCorp would be thrilled to see it happen. A corporate cabal of slimy spin doctors (Jay Baruchel), cold-hearted lawyers (Jennifer Ehle) and trigger happy weapons experts (Jackie Earle Haley), the only thing keeping the company from implementing a full-scale robot rollout is senate legislation that prohibits the use of drones on US soil. But CEO Raymond Sellars (Michael Keaton) has a plan to circumvent the bill, while also humanising his robots in the eyes of a sceptical public. After an extensive search, the OmniCorp board finds Detective Alex Murphy (Joel Kinnaman), a Detroit police officer critically injured by a car bomb. Fitted with a robotic body and a software-enhanced brain, the company resurrects him as RoboCop.

Kinnaman doesn’t exactly impress out of the gate, mumbling his way through Murphy’s pre-injury scenes so mechanically that you may wonder if he’s already a robot. One suspects this is the direction he received, however, as its Murphy’s “stability” that makes him a viable candidate. Either way, the actor’s work is much more suited to a character whose humanity is interfered with by a cocktail of chemicals and software. Murphy’s inability to fully process his own emotions is displayed in the film’s most grotesque sequence, in which his robotic parts are removed for the first time, revealing just how little human is left. Like something out of a Cronenberg nightmare, it’s a moment of body horror so bizarre and repulsive that it’s hard to believe it survived the teen-friendly edit. To his credit, Kinnaman completely sells the reaction, one of shock beyond all comprehension.

The film’s best performance comes from Gary Oldman, playing the film’s most complex character. Dr. Dennett Norton is the OmniCorp scientist charged with Murphy’s robotic rebirth. Originally assigned to the company medical research division designing high-tech limbs for amputees, Dennett is initially reluctant to work on technology with violent applications, but is swayed by Sellars’ snake-oil pitch that Murphy can make the city safer.  As OmniCorp grows more insidious, Dennett is forced again and again to balance his conscious with corporate and personal interests. If the threat to Murphy’s humanity is an existential question, rooted in the very nature of his existence, the things that corrupt Dennett are far more commonplace. Ambition. Self-preservation.  Good intentions gone awry. 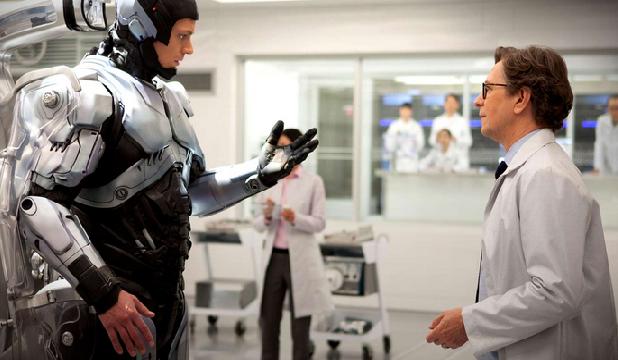 Unfortunately, just as the film’s twenty-first century Dr. Frankenstein is strongarmed by the OmniCorp board, so too are Padilha and screenwriter Joshua Zetumer beholden to corporate masters of their own. As much as they have aimed for something smarter, their RoboCop still feels in many places like a studio film, in a way that Verhoeven’s does not. Ideas about revenge, free will and the nature of the soul are floated, only to be sacrificed to the increasingly run of the mill plot. The inclusion of Murphy’s wife (Abbie Cornish) and young son provides a lens through which to further consider the extent to which Murphy is a human. Yet while Cornish gives an emotional performance, the subplot’s key scene, in which the family is reunited soon after Murphy’s resurrection, is too brief to be truly effective.

The other thing that’s lacking is the action. Greater themes aside, RoboCop is a movie about a robot cop: even if the script was as dumb as a sack of hammers, surely we could expect some decent shootouts? Sadly, Padilha opts for the most generic approach, mixing disorienting handheld camera work with quick cuts and video-game POV. Ironically, in a film where most of the action scenes are borderline incomprehensible, the best one takes place in total darkness, with Padilha employing heat-vision and unconventional light-sources – the flash of gunfire, the diodes on Murphy’s helmet – to craft the one set-piece in the movie that feels genuinely thrilling and original.

In a lot of ways, the action is a lot like the rest of the movie, in that its ideas are sometimes better than the actual execution. A scene of Murphy fighting the lumbering ED-209’s is shot and staged in a pretty standard way, yet it stands out because of what it represents. Man versus machine. Strategy versus firepower. The peacekeepers vs. the gun makers, the corporate crooks, the private armies. If such a reading, or indeed, this entire review, seems generous, consider the constraints under which Padilha and Zetumer were working. Not just the studio, but the audience. The movie-going public isn’t exactly clamouring for anti-American satire in their action flicks. This might be as bold a RoboCop as we could have expected out of Hollywood today. I doubt even Verhoeven could have done much better under the circumstances.