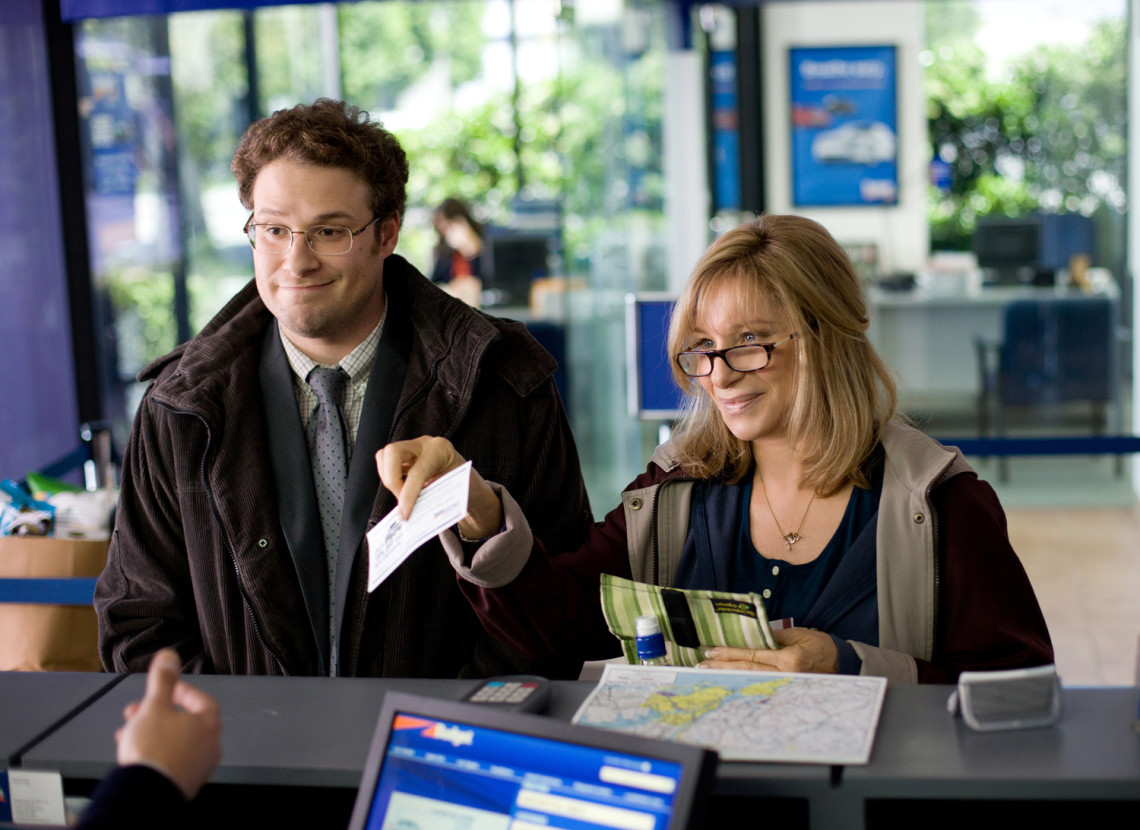 ‘The Guilt Trip’, or How to Tolerate a Mother

At its best, The Guilt Trip is a heartwarming portrait of the eternal and maternal relationship between mother and son. Unfortunately, the film is not often at its best, straying away from its qualities and dissipating into affable, light, rather asinine fluff.

Similar to her last two sophomoric movies (The Proposal and 27 Dresses), Anne Fletcher’s fourth feature film achingly suffers from haphazard comedy gone awry and a plot built upon an unnecessary lie. Like a teenage boy who refuses to listen to the sage advice of his mother, Ms. Fletcher appears not to have learned from her past mistakes.

Perhaps for the first time in his career, Seth Rogen breaks out of his comfort zone (the schlocky, juvenile man-child) as Andrew Brewster; an organic chemist who graduated from UCLA five years ago and has been attempting to sell his product (a 100% organic cleaner) around the country since.

What was supposed to be a weekend for the two to catch up, quickly escalates into something much bigger when Andrew decides to ask his mother to come along with him on his cross-country voyage. The reason for her straggling along (Andrew insists) is to bond and provide moral support as he continues to pitch his organic cleanser. Sounds reasonable enough. Unfortunately, this is where deceit comes into play. The true rational behind Andrew’s faux kind gesture is to reconnect his widow mother with her first lover now livening in San Francisco.

And so the mother-son expedition begins. What’s to come? Within the first seven seconds Joyce pops in the audio book of Middle Sex, Andrew complains, and Joyce responds with either a motherly retort or a bafflingly idiotic observation. Repeat that formula enough times to make a 95-minute ostensible comedy, and presto, you have The Guilt Trip.

We’ve seen road-trip movies that humorously operate within the confines of its script (think Steve Martin constantly aggravated by John Candy’s actions in Plains, Trains, and Automobiles). The Guilt Trip establishes one note, and continues to bang that same note home until you’ve had enough of it.

Joyce pesters Andrew, then Andrew gets upset, and eventually the two reconcile. Or, Joyce publicly embarrasses Andrew, then Andrew simply ignores her. Or, and this is the one that occurs most often, Joyce says something stupendously naive, then Andrew responds with dull sarcasm. Somehow, the film manages to be more monotonous than those last three sentences.

Rogen and Streisand have some genuine on-screen chemistry, which elicits a few scenes that strike emotional chords. Albeit scattered throughout the script, Ms. Fletcher understands the core of most mother-son relationships: the son typically undervalues his mother – taking her affection for granted. Even at the age of 30, Andrew still doesn’t fully appreciate his mother’s unabashed love.

I’d divulge the film’s resolution, but what’s the point? The Guilt Trip doesn’t attempt to divert from the beaten path. Ms. Fletcher clings to the dangling, humdrum formula plaguing each of her movies.

2 thoughts on “‘The Guilt Trip’, or How to Tolerate a Mother”