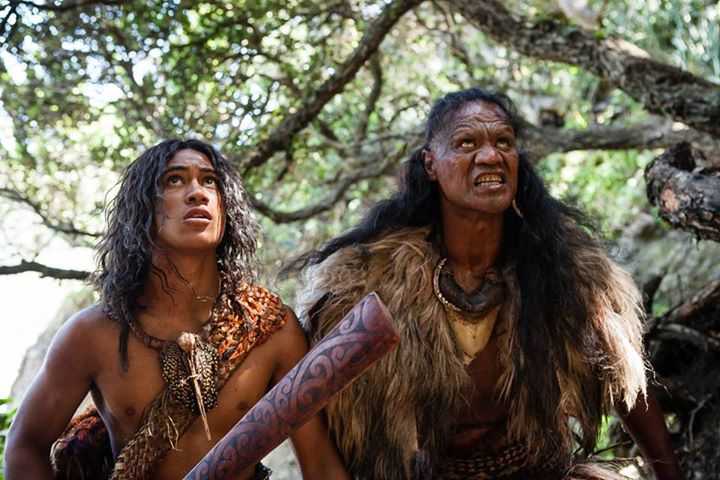 Thirty years ago, give or take, Toa Fraser’s The Dead Lands would have fit in nicely during the period’s boom of heroic fantasy films—Krull, Hawk the Slayer, Conan the Barbarian, Fire and Ice, The Sword and the Sorcerer—save for a paucity of camp. Not that The Dead Lands is an entirely somber affair, mind you, but it does kick off with genocidal slaughter engineered by a warmongering lunatic, with men, women, and children brutally killed as they lie sleeping and their huts burn beneath the stars. Unlike its elder fantastical cousins, there’s a sense that what we see happen in The Dead Lands might actually have occurred in Māori history.

That history happens to be the element that supplies the film with its backdrop and sets it apart from its contemporaries and antecedents alike. That feels like an immediately bold gesture: Few movies have ever been made in the Māori language, and The Dead Lands soaks itself in the dialect. There’s something exciting, if only superficially, about hearing the actors speak in a tongue rarely heard in cinema, and even more thrilling to see Māori custom, lore and belief applied to a simple revenge blueprint. More than stylized bloodshed, it’s these details that make The Dead Lands feel alive.

But chutzpah and cultural emphasis aren’t enough to make a film great, and though The Dead Lands is consistently watchable, it’s also uneven and perhaps even a little troubling. The story is structured straightforwardly: Young Hongi (James Rolleston) is one of the few survivors of a treacherous attack on his village by a rival clan, led by Wirepa (Te Kohe Tuhaka) in the violent pursuit of glory. Grieved and outraged over the betrayal, Hongi follows the trail of his enemies through the hazardous region of the title, swearing to avenge his people. But he’s just one kid against a group of seasoned killers. Thus, he enlists the aid of the Warrior (Lawrence Makoare), a legendary spiritual fighter who roams the Dead Lands, slaying trespassers dumb enough to enter his turf.

It’s standard stuff, but that’s okay. The film has a pulsing vibrance, much of which stems from the performance of Rolleston, who made his debut in 2010 in Taika Waititi’s Boy. Rolleston isn’t a boy any more, of course, and The Dead Lands gives him a stage on which to grow as an actor and as a man. He’s almost instantly dwarfed by the presence of Makoare, who most American audiences know for his work in the Lord of the Rings and Hobbit franchises (even if they won’t recognize him in the flesh and without prosthetics). They’re an entertaining odd couple: Hongi is hopeless in the art of combat, while the Warrior revels in bashing his enemies’ skulls with his patu. The film is generally at its best when it invests in their bond.

This is a movie about vengeance, though, which means action, and Fraser shows as much skill in shooting fight scenes as he does in capturing the otherworldly beauty of his New Zealand locations. The Dead Lands looks terrific, whether we’re watching arterial spray douse the screen or gazing at a lingering image of the country’s stunning natural landscapes. But whenever the characters take to arms, there’s discomfort stirring at the heart of the picture. Cursory research suggests that Fraser has done his homework and honored the Māori traditions he plays with, from the energy of the haka dance to the costuming and makeup worn by his cast. Even so, we may question whether Fraser is just reinforcing negative tribal stereotypes in the movies (intentionally or otherwise), or if he pays enough respect to Māori mores to rise above clumsy, accidental ignorance. We’re not quite in Peter Pan or Dances With Wolves territory; there are no ugg-a-wuggs, and no white savior to right Wirepa’s wrongs. All the same, your mileage with The Dead Lands’ tropes may vary.

Divorced from those concerns, The Dead Lands works: It’s propulsive, it looks lovely, and its action sequences boast the same kind of delightfully over-the-top bravado as a martial-arts flick. It’s a solid entertainment, in other words, and with some fine-tuning it might even have been great. But for all its potential, both met and unmet, it’s hard to turn aside those questions of authenticity wholesale.