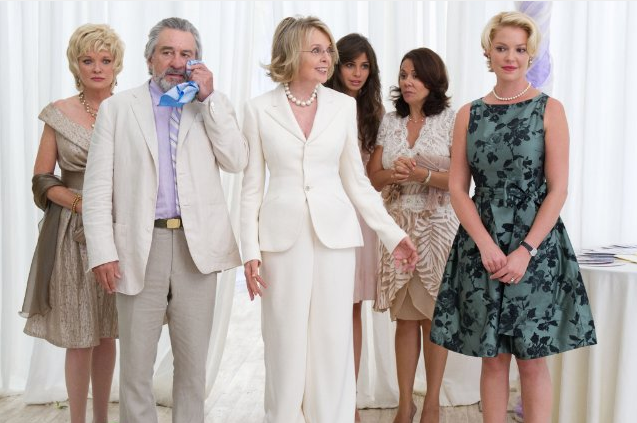 With the romantic comedy getting increasingly tedious, recent entries seem to respond by either going back to basics or pushing the limits of the formulaic story into an almost meta commentary. The former describes Save the Date, one of my favorite movies of 2012. I’d like to think that Justin Zackham’s directorial debut The Big Wedding fits into the latter category—solid, if a bit predictable, and at least more reasonable than something like How to Lose a Guy in 10 Days.

Zackham adapted the sitcom-y plot from the French/Swiss film Mon frère se marie, but there are plenty of very American touches in this new version: Divorced parents Don (Robert De Niro) and Ellie (Diane Keaton) have to pretend that they’re still married for the wedding of their adopted son Alejandro (Ben Barnes, who has really grown up). Why? Because his intensely religious biological mother is coming from Colombia and believes that divorce is a sin. Aiding in this farce are Don and Ellie’s other children Lyla (Katherine Heigl) and Jared (Topher Grace). And what about Don’s poor partner Bebe (Susan Sarandon), who gets demoted from live-in girlfriend to caterer?

With certain leading men like Tom Cruise or Ashton Kutcher, audiences know exactly what kind of movie they’re going into. You have that same shorthand with The Big Wedding, but tenfold. Everyone employs their usual shtick here, to an almost astonishing extent: Keaton is yet again exploring her sexuality, though without that infamous nude scene from Something’s Gotta Give; Heigl, rocking a short haircut, seems repulsed by babies, until you learn why; Amanda Seyfried is the blushing bride, except this time there are three mommies instead of three daddies like in Mamma Mia!; and even Robin Williams basically reprises his stern, abstinence-only reverend from License to Wed.

The only casting that doesn’t fit at all is Grace as 29-year-old virgin Jared. First off, it’s Topher Grace. Furthermore, his reasoning — his parents’ divorce made him hold out for the true love to give his first time to — is one of the movie’s weaker links. That said, Zackham does infuse his script with plenty of sharp commentary on the WASPy Connecticut community, especially Seyfried’s uptight parents Barry and Muffin, and their fear of having “beige grandchildren.” Several moments where these characters are caught in their out-and-out racism inspire a gleeful schadenfreude in viewers excited to see the uptight upper-class archetype get their comeuppance.

Unfortunately, these bright little bursts are exceptions in an otherwise pretty standard landscape. For the most part, the movie is very color-by-numbers, and there are no huge surprises. It’s up to you to decide if that unevenness spurs you on to see the movie, or if you’d rather rent How to Lose a Guy in 10 Days. Despite its ridiculous premise, at least it breaks new ground in the genre.

The Big Wedding Is A Big Failure

This review was originally published here on April 27th.