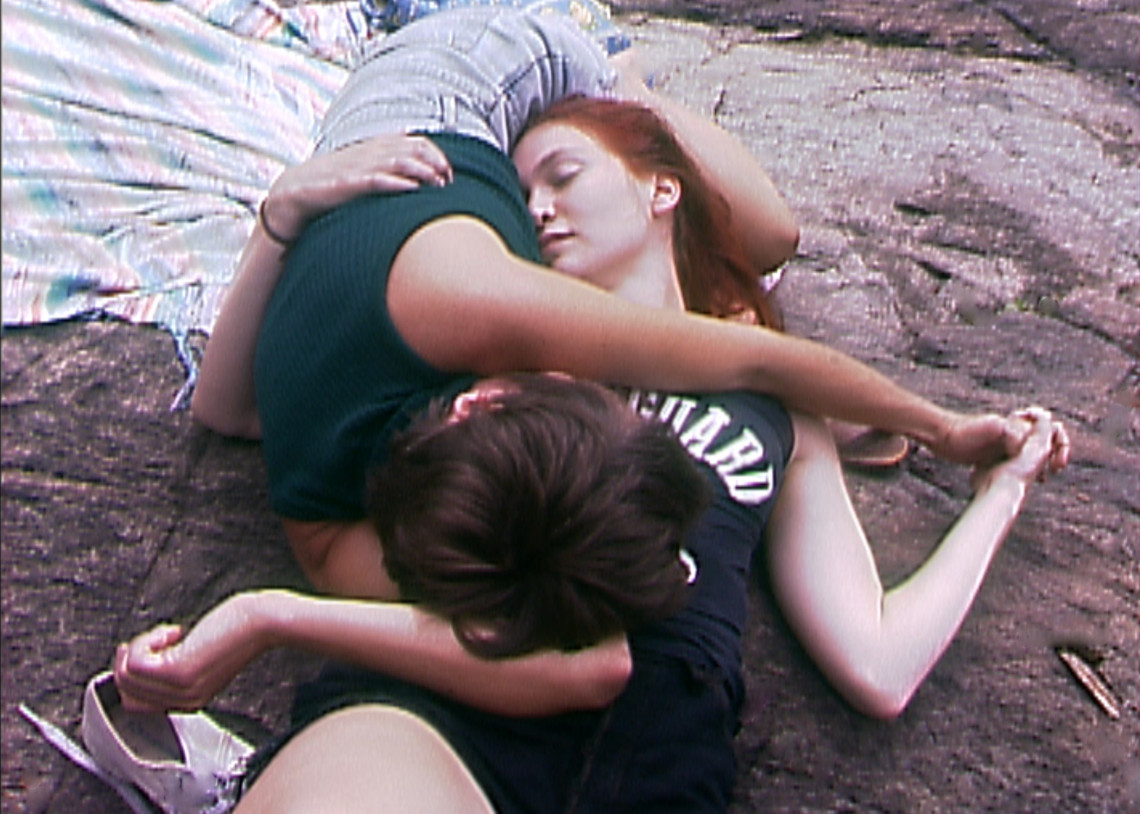 A sober-living safe house is neither safe nor sober in Stinking Heaven, the fifth feature (and fourth in 3 years) from director Nathan Silver. The New York-based filmmaker’s wonderfully caustic sense of humor and fetish for familial and social dysfunction are ever-restless and alive. Rarely has on-screen discomfort been so comforting. The man is single-handedly turning mortifying dinner table awkwardness into a genre.

In New Jersey circa 1990, a young married couple, Jim (Keith Poulson, Listen Up Philip) and Lucy (Deragh Campbell, I Used To Be Darker) run a commune providing refuge for recovering drug addicts of any age who pass the time making and selling bathtub kombucha (“fermented healthy drink”). They play games and bathe in the rain. They sing songs with refrains like “Love never ends.” Their collective fashion sense might be described as “Manson Family couture.” They take turns reenacting the worst moments in their addictions, purging their respective rock bottoms to the reward of limp applause. It’s Short Term 12 by way of the Marquis de Sade.

All are somewhat civil to each other, though no one looks particularly happy. Silver’s searching camera finds an array of stoic stares, a kaleidoscope of abysses. Many seem to have nowhere else to go, or maybe they prefer the way the homegrown establishment grants leeway a bona fide rehab facility wouldn’t. Or maybe they’re hiding from something else beyond the source of their addictions. The closeness of the house’s inhabitants evokes the chamber-like confines of the teenagers in Yorgos Lanthimos’s masterpiece Dogtooth, though somehow is even more disturbing considering their voluntary participation. The house in Stinking Heaven is the kind of location you can smell through the screen, all must and vinegar.

The arrival of Ann (Hannah Gross, I Used To Be Darker), a fellow addict and ex to newly married house member Betty (Eleonore Hendricks), gradually shakes the commune off its already rickety foundation. Tensions mount in typical Silver fashion, simmering before they scald, to a point beyond salvation. He is a maestro of carefully cultivated chaos, which reaches a fever pitch in Stinking Heaven as close to the work of Andrzej Żuławski, the Polish master of hysteria, as has been depicted in an American film, all while fully retaining Silver’s own squid-ink-black eye for humor.

More than ever in the director’s urgent output – including the incredible Exit Elena and its two follow-ups, last year’s Soft in the Head and Uncertain Terms – Silver’s micro-budget and script-free schematic works to his advantage. Without smooth maneuvering in the edit, improvisation has a tendency to expose weaker actors, but the inclusion of the “re-enactments” rids the film of that demand altogether. Even the presence of a cameraman in these scenes does little to eliminate a heightened sense of danger. Just because they’re performances doesn’t make them less real.

Silver makes up for what he lacks in budget (Heaven, like Soft in the Head, was partially funded through Kickstarter) with grandiose, emotionally explosive catharsis. The sober-living home is a house of another extreme, one that promises positivity and sanctuary. It is decidedly unreligious, and the members would likely scoff at the suggestion their behavior and arrangement is reminiscent of a cult. But it’s a faulty if well-intentioned operation. Then again, so is religion, an institution in the name of which its devotees sometimes also commit atrocities.

There have been plenty of anti-drug movies, but Stinking Heaven is perhaps the first to hammer the moral of “Use in moderation.” It only takes a couple of sequences the length of a blink to lay it out. The pre-title moments, for example, are of an isolated excerpt of the past – dream? flashback? – of life prior to the commune for Ann and Betty, the romantically intertwined characters we’ll soon know. They laugh, smoke pot, and skinny-dip in a lake while the oxymoronic two-word title hangs in the sky above them. What it’s describing is neither this moment nor life on the commune; it fires a torpedo into the concept of total altruistic salvation. If there is little to no hope for these people, it’s because hope can only exist under the threat of hopelessness. One extreme cannot be ignored or eliminated without acknowledgment of the other. Balance is vital.

This is expressed best when an older and seemingly most well-adjusted member Gene (Larry Novak), with his billowing silver beard and motorcycle bandana, downs an airplane-size bottle of booze from his stash outside during a daily chore, while those inside the house continue to unravel.

Doe-eyed Tallie Medel, so understated and sneakily impactful in The Unspeakable Act and Joy Kevin, nearly steals the movie as Courtney, whose irascible dad Kevin (Henri Douvry) also lives in the house. Medel’s time to shine is her time to detonate, and it’s a meltdown for all time. Composer Paul Grimstad’s elastic synth-laden hissyfits couldn’t make for a better companion score, and director of photography Adam Ginsberg’s use of obsolete Betacam is perfectly crude and transportive to 1990, that strange purgatory between two aesthetically mercurial decades, causing sources of light to give off a noxious, nuclear-green glow.

Nathan Silver continues to be an exhilarating cinematic talent to watch; his name should be tossed in the same bowl as Cassavettes and Fassbinder. Stinking Heaven is a high point, and one of the most original and harrowing depictions of substance abuse ever on screen. It makes Requiem for a Dream look like an After-School Special.