Stanzas of an Eccentric Cine-Poem

“Even if I wanted to, I couldn’t sleep with my son’s grandpa. Wouldn’t you agree?”

There are moments when you realize that the film you’re watching can only be the work of French eccentric Alain Guiraudie. This is a director who’s been something of a cult figure since his feature debut That Old Dream That Moves (2001), a modest vignette about a lot of gay sex amidst a factory closure. That one got a thumbs up from no less a discerning customer than Jean-Luc Godard, who thought it was the best French film he’d seen in ages. After Guiraudie continued work in the margins of the industry, following his own distinctly oddball muse, it was a previous film, the seaside murder mystery Stranger by the Lake (2013), that finally brought Guiraudie some semi-mainstream attention. One of the best-received films at Cannes that year, it showed a new facility for narrative construction, combining a Chabrolian air of suspense with the director’s usual frankness about men fucking men.

Finally bumped up into the main competition last year at Cannes, Guiraudie’s latest, Staying Vertical, was one of the many highly original films from that slate to go home empty-handed. Despite the 2016 jury’s uniquely crack-headed opinions, it’s unlikely that a film as completely off the wall as Staying Vertical would have ever pulled in a prize. On its face, it is pure surrealism; like many of Guiraudie’s films it is comprised of disparate pieces that do not obviously cohere into a logical cinematic statement. However, taken as stanzas in a book-length cine-poem, connections emerge, themes assert themselves, and if we forget about the usual rulebook and just go with it, it isn’t too difficult to get on Guiraudie’s wavelength.

Vertical’s main character is Leo (Damien Bonnard), an awkward figure whom we first meet stopping his car at the side of the road giving a kind of “are you a model?” come-on to young Yoan (Basile Meilleurat). The kid’s having none of it, and next thing we know Leo is backpacking across a meadow, chatting up Marie (India Hair), a lonely shepherd with two young sons. They hook up, quickly have a baby, and in one of cinema’s most absolute, unexamined cases of postpartum depression—assuming that’s even what’s going on—Marie rejects the baby in no uncertain terms. She and the boys split, leaving Leo alone with his newborn. 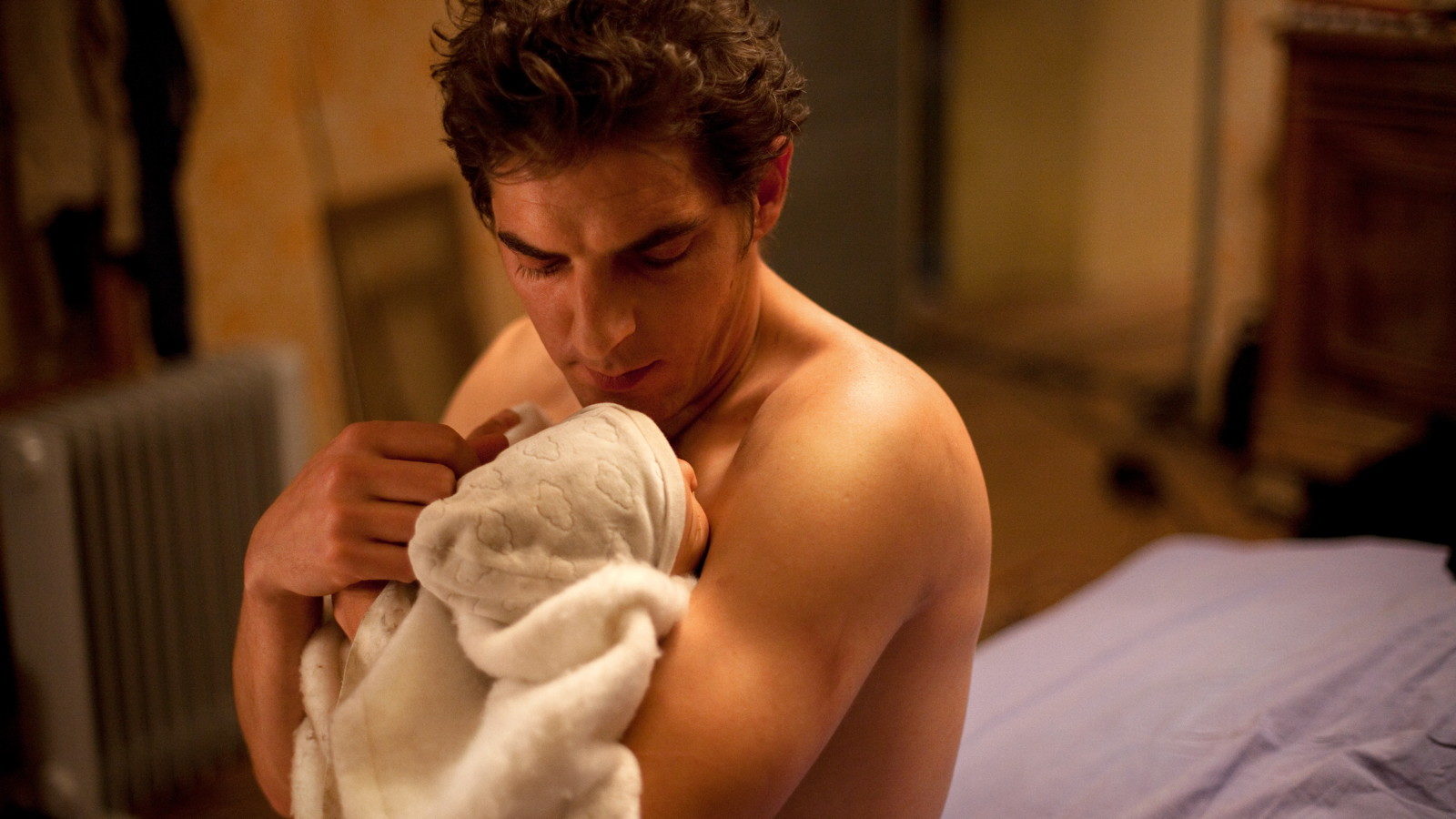 Leo has other problems, which we only discover gradually. He is not just a drifter, it seems. He is a screenwriter who has blown a deadline very badly and is stringing his producer (Sébastien Novac) along, while continually requesting cash advances. And in order to secure a place to live with the baby, Leo settles in with Marie’s sheep farmer father Jean-Louis (Raphaël Thierry), who starts coming on to Leo in some serious ways.

What is Guiraudie trying to accomplish with Staying Vertical? For one thing, as with all of his films, Guiraudie is forging an alternate universe in which sexual fluidity is simply assumed. There are no clear boundaries between gay, straight, or bisexual in Staying Vertical. There is no predicting whose desire is going to fixate upon whom. This has been a dominant feature of Guiraudie’s cinema from the beginning. For example, in his 2009 film The King of Escape, a hefty, middle-aged gay farmer suddenly decides to have sex with a young girl (The Secret of the Grain’s Hafsia Herzi), likes it, and the two form a couple. In fact, Stranger by the Lake is unusual in Guiraudie’s filmography in its rather unswerving attention to gay male sexuality. With Vertical, the director is back in the “enby” territory that is a defining feature of his worldview.

Another frequent Guiraudie trope, gerontophilia, also rears its head in this film. Again, with the exception of Stranger, virtually all of his features involve sexual relations between young people and senior citizens. At times this seems to have a symbolic dimension, as in Staying Vertical, where traditional bonds with the elderly (caregiving, child-rearing assistance) are mined for the romantic subtext they might have if shared between two people of a similar age. But there’s also a bluntness to these hook-ups that indicates that they should be taken at face value. Jean-Louis tells Leo he wants him. And the cranky elderly neighbor Marcel (Christian Bouillette) keeps insisting that both Yoan (his caretaker) and Leo are secretly lusting for him. “Yoan is dying to fuck me. Just because I don’t get hard anymore doesn’t mean I spread ‘em like the Queen!”

Marcel repeatedly denigrates Yoan with racist and homophobic slurs, but in the end, we see that even this behavior is borne from fear and desire, both of which Leo ameliorates in the end, so to speak. Staying Vertical is a film of unexpected familial bonds, unconventional sexual unions, and above all, a portrait of the tentative but eventually unbreakable bond between a father and his newborn baby. In a sense, Guiraudie has orchestrated an omni-queer space, where conventional assumptions about desire, parenthood, and gender roles do not hold sway. 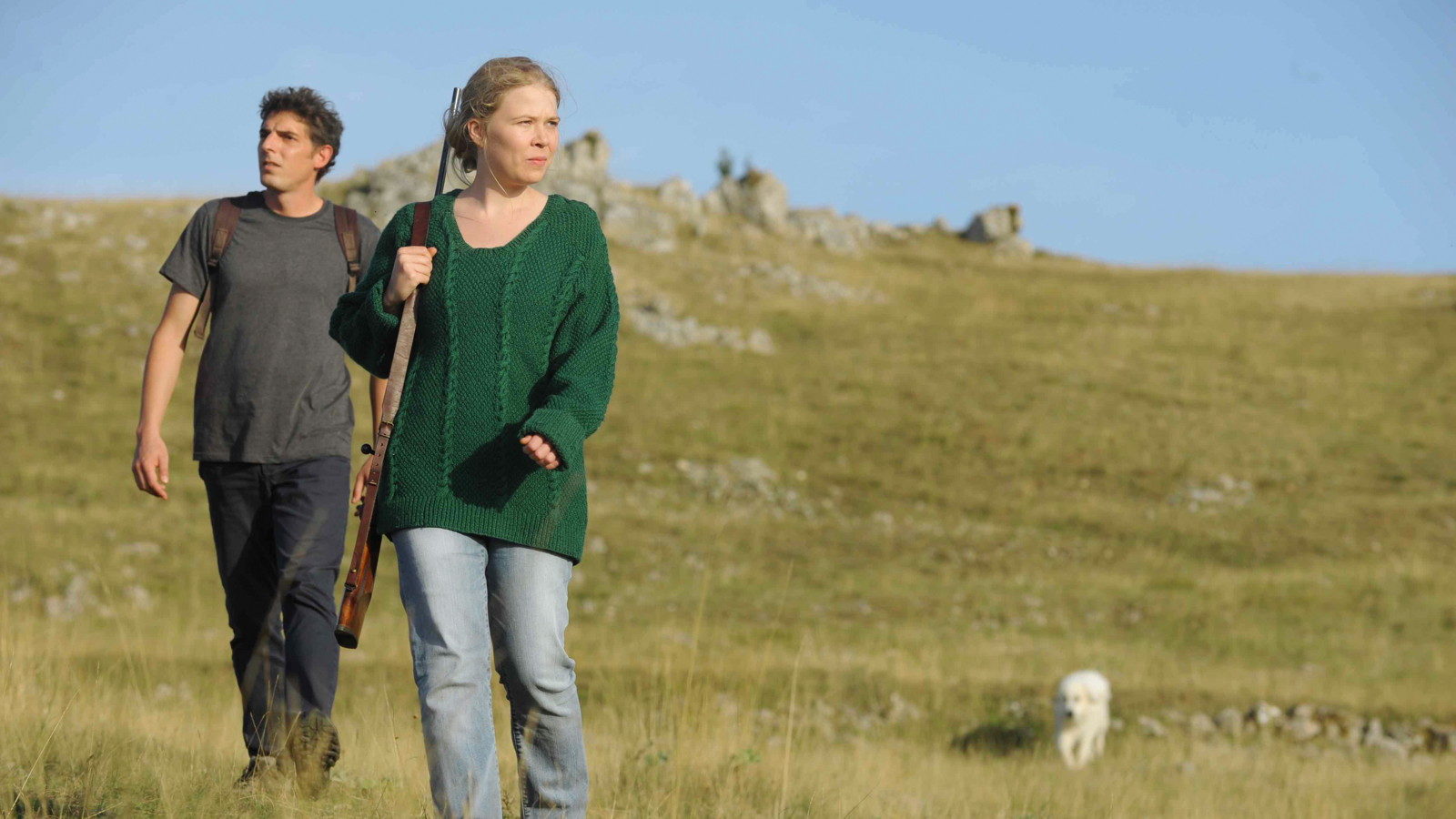 Sadly, this quasi-utopia cannot last. Once the producer catches up with Leo (who actually pulls a halfway decent script out of his ass), things start falling apart. The law, the media, child protective services, and heteronormativity all come crashing in, and this is where Staying Vertical becomes both tragic and fascinating. However odd the events from the first two acts of the film may seem, none of them is out of place in a Guiraudie world. Much stranger things happen in his earlier films. But the third act finds the director doing something he’s never done before: showing what it would look like if his nonjudgmental, anarchic world of wonders were to suddenly collide head-on with Reality. It’s not pretty.

This relationship between the world of Staying Vertical and real life (which, incidentally, is where Guiraudie filmed it) is emphasized by a number of the film’s key visual motifs. If the plot points are stanzas of a poem, Guiraudie and regular cinematographer Claire Mathon provide the punctuation. In addition to repeated shots of Leo driving into a rural cul-de-sac, driving in to get out, Staying Vertical emphasizes horizontality. This is a film filled with distant vistas, wide-angle landscape shots, and characters surveying the territory. This flattening out of the spaces the characters occupy—the meadow, the city, the neighborhood—makes their movement through those spaces seem almost like a form of resistance, a refusal to be knocked down.

This seems to be Guiraudie’s closing argument. Moving through life for the sake of our loved ones, and fighting to remain faithful to our own bizarre values, is hard. But it is the measure of true survival. In the final scene, Leo and Jean-Louis are on the prairie, surrounded by wolves. “As long as we’re standing,” Leo councils, “we’re okay. Don’t even slouch.” Unfortunately it’s true. Show weakness, and the world moves in for the kill.