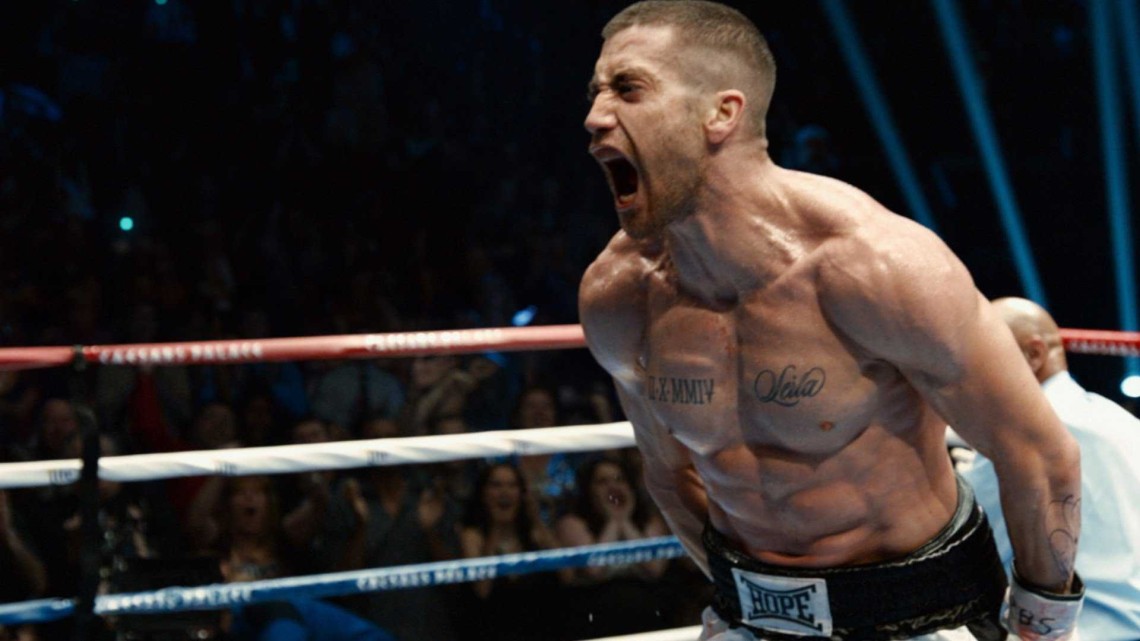 “Southpaw” Is The Equivalent of A Great White Dope

Southpaw starts at a name, but it’s not the titular boxing term this movie brandishes and emblematically forgets to define. It’s the lead character’s surname of Hope, a branding that dares filmmakers and audiences alike to take anything he does right on the nose, a writing stunt akin to renaming Clark Kent to Clark Goodman. In this film from director Antoine Fuqua and writer Kurt Sutter (creator of FX’s “Sons of Anarchy”), Hope is a brash statement from a movie that can only speak in forceful gestures, one that lacks the grace to actualize its allegorical potential.

The tale of Billy Hope (Jake Gyllenhaal) at least differs from many other boxing stories by starting at the top. Beginning with the light heavyweight champion standing as undefeated, Hope has already hustled from his orphan origins to multi-million dollar contracts, a palace outside of New York City with an echo, and a fleet of cars. He has achieved such with the loving management of his wife Maureen (Rachel McAdams, offering some sincere screen time), and the soothing love of his daughter Leila (Oona Laurence). They are his sanctuary from a business that prods his destructive potential. In Jake Gyllenhaal-speak, Hope doesn’t feel the need to Hulk out on any mirrors when they’re around.

Hope’s downward spiral begins when Maureen is killed during a scuffle (that Hope starts) after a charity event, and when failing to rebound from that grief during a following boxing match, he head-butts a referee and loses his professional license. In a stretch of comical bad luck, the money Hope has accrued is vamoose too, barely explained by an obligatory sad lawyer scene, but with hilarious passivity from his friend/promoter Jordan (Curtis “50 Cent” Jackson). When Hope decides to smash his car into a tree with an unlicensed weapon on him, the court puts his daughter in Child Protective Services. In a final burn, Jordan ditches him for more lucrative pastures, declaring like a man who might just end up bankrupt one day that “if it makes money, it makes sense.”

Sutter’s inversion of the boxer’s odyssey proves to be the labored prologue to a rather standard set of events, with Hope’s custody of his daughter providing his narratively unique inspiration to hustle (the second time). As young fighters are apt to do, Hope receives wisdom from a grizzled boxing trainer named Tick Wills (Forest Whitaker, director of Hope Floats [no relation]), who owns an inner-city boxing gym that’s filled with high school-age young men. In this second half, Southpaw succumbs to macho melodrama, which even McAdams’ sticky Jersey accent and calming presence danced around until it entirely became Hope’s show.

More than being another boxing movie, this is a showcase from Gyllenhaal, who continues to let his dedication do half of the acting. Gyllenhaal nonetheless makes an anxious monster out of Hope, with a curious existence that offers this movie its potential. In select scenes, one can see Gyllenhaal nudge Southpaw towards intriguing facets about Hope; the spectacle of a celebrity that the shy, simple-worded man doesn’t know how to handle, the love in his life that fulfills him and then renders him completely alone, or the rehabilitation into the real world that he must manage solo. Using a fine-tuned physical presence, Gyllenhaal plays a character who doesn’t know how to properly express himself, but the problem is that Fuqua doesn’t know how to do this for Hope, either. Fuqua simply views him as an explosive. Or, worse, the model for a cheesy motivation poster, a snapshot of a simplified sentiment to beat life’s ails.

Gyllenhaal’s hard work gets himself to the level of dramatic representation at best, revealing the flaws with Fuqua’s empty vision. Fuqua can only brand Hope, by hyping him up with a first-person soundtrack (“I’m a motherfuckin’ beast!” declares The Hustle Standard, and “I am phenomenal, phenomenanlononamenalonomenal!” claims Eminem), or giving him the forearm tattoos of “Father” and “Fighter.” For whatever Gyllenhaal may briefly express about Hope or his world, Fuqua has no curiosity. Hope’s second-half recovery comes with the exact melodramatic pointedness Sutter’s script should avoid at all costs, lacking in the reward that usually comes from digging into a character’s woes. Gyllenhaal’s charisma directly suffers for this, his skeleton-performance in Nightcrawler resonating with much more dramatic muscle, if only for the ideas within Louis Bloom that Hope, in Fuqua’s hands, lacks.

In this simplification of Hope’s purpose, an incomplete lesson is provided. It’s uncertain as to what Hope really learns from his training with Tick, aside from how to temper his explosive potential in courtrooms or the boxing ring. A troubling set of values is left in the film’s wake, which doesn’t have a conflict of shame considering Hope’s temper leading to his wife’s death, but just to the proper way to bottle it up. Southpaw is more the mastery of the repressed, corrosive machismo than it is any freedom from the way it clearly hurts him too, and leads to dangerous behavior (like getting into a fight in which his wife gets shot). Hope’s lack of regret for such an event is one of the movie’s more disturbing caveats.

However jacked-up Southpaw is about boxing, its visuals in the ring don’t boast inspiration. The viewer is not immersed in the film’s fights so much as given a cable subscription to them, including a flat color palette and HBO-ready medium wide shots. (For those keeping track at home, The Fighter did this better.) Cinematographer Mauro Fiore’s character does get in the action, proving that the point-of-view is the best shot a camera has in the ring, which gives Southpaw a few jolts. But these fights are at best a barrage of punches, edited without emotional crescendos to later feel victorious. They’re opportunities most of all for Gyllenhaal to grit his checkered teeth and/or drool blood.

Southpaw is defined by these boxing scenes more than Gyllenhaal’s hustle. The film is motivated, but by the blunt spectacle of enduring pain; it packs themes, not ideas, in its narrative of beating the odds. Most tellingly, nagging in the viewer’s ears are the sports commentators, who may as well have written this script instead of Sutter. They, along with other media coverage shown in the movie, cannot resist presenting Hope as a self-titled package. By its end, Southpaw proves it is no more dramatically clever than a sensationalized headline, of which Fuqua’s bungled film features Oscar-winner Whitaker showing a pumped up, award-hungry Gyllenhaal a newspaper that reads “The Great White Dope.”