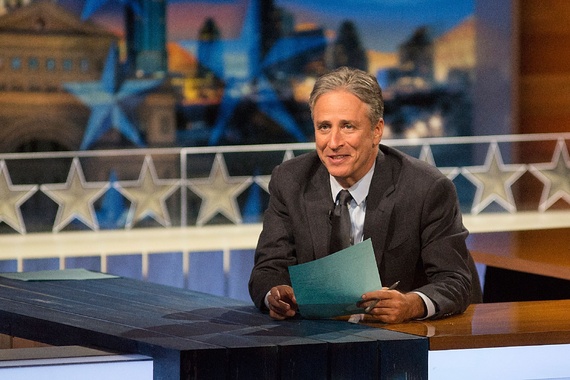 Whatever you might feel about the aesthetic or political merits of the upcoming “Fifty Shades of Grey” movie, at least it’s a woman’s story.

That fact is more significant than you’d think. While a handful of very visible female-centric movies, like “Gone Girl” and “Mockingjay” made a big splash at the box office last year, the situation for women onscreen is actually more dire than ever.

Jon Stewart Is Going Out on Top by David Sims. Sims talks about the upcoming retirement of Jon Stewart from The Daily Show.

When Jon Stewart goes off the air later this year, it won’t play out as a gauzy farewell tour, a heartwarming farewell to a late-night host whose glory days are long behind him. Stewart is 52, and he’s been hosting The Daily Show for 16 years, but there’s a reason the abrupt news of his retirement has sent everyone (including Comedy Central) to their panic stations.

When it was announced late last year that Terrence Malick’s Knight of Cups would be in competition at the 2015 Berlinale, many read this as a sign of hope – that the festival could still manage to snag a world premiere that most would assume was destined for Cannes. At the other end of the scale, there were those who, sight unseen, took this as confirmation that its unspooling here is a telltale sign that the film simply must be second-rate.

How to Build a Wildly Popular Movie Romance by Jason Bailey. Bailey talks about the formula to make a successful movie romance.

Valentine’s Day is just around the corner, which is very good news indeed for the makers of The Notebook, Sleepless in Seattle, Pretty Woman, and the many other romantic perennials that get queued up, purchased, and downloaded every year around this time. But what, exactly, is the magic ingredient that makes for a classic romantic movie — one that entertains, enlightens, and (most vital to that ancillary-motivated industry) brings you back, year after year?

Spider-Man Will Be in Marvel’s New Avengers Movies. But How Will He Fit in? by Jonathan L. Fischer. Spider-Man is back in the Marvel fold. How will they end up using him?

Marvel fans were whipped into a frenzy late last night when Marvel.com announced that Spider-Man is joining the Marvel Cinematic Universe. This means that, beginning next year, Marvel Comics’ flagship character could finally share the big screen with Iron Man, Captain America, Thor, the Hulk, and the rest of the superheroes and supervillains currently populating the comic-book companies’ massively successful movie franchise.