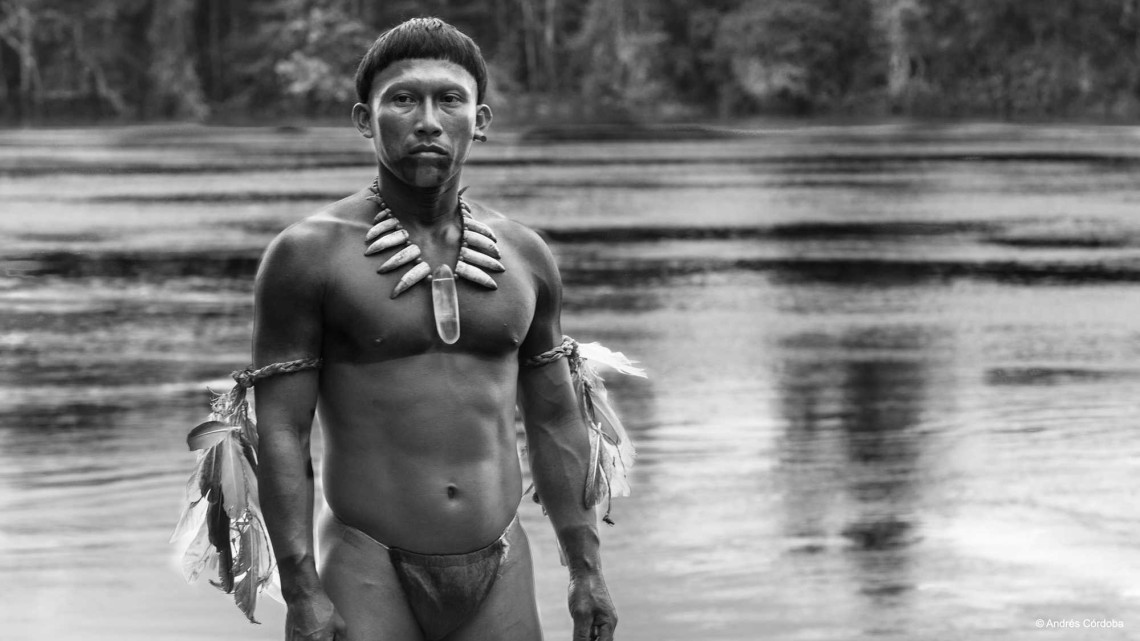 Now Playing: “Embrace of the Serpent”

Vikram Murthi on one of this week's new films, the Colombian Oscar nominee "Embrace of the Serpent."

In Embrace of the Serpent, director Ciro Guerra first places us in the river. We watch it move and we hear its sounds. The camera then slowly pans up to find a man on the riverbank—crouched, almost nude, and holding a spear. Solemn and solitary, he listens intently to the wisdom of the jungle; he’s a part and parcel of his environment, in tune with its rhythms and attentive to its needs. With this first shot, Guerra expresses Embrace of the Serpent’s twin focus: 1) A warrior’s struggle to retain his culture, and eventually pass it on, amidst colonialist intervention, and 2) the jungle as a body, desperately striving to flourish and remain free of corruption.

The warrior in question is Karamakate (Nilbio Torres), a man without a tribe who soon discovers Theo (Jan Bijvoet), a European explorer, and his companion Manduca (Yauenkü Migue) in dire need of help. Theo has fallen ill and needs the rare yakruna plant to help heal him; reluctantly, Karamakate agrees to guide them despite his resentment against even the presence of a white man. Years later, an American named Evan (Brionne Davis) finds an older, senile Karamakate (Antonio Bolivar) and asks for his help to find the same plant, but as it turns out, Evan’s motives are much less pure and immediate.

Based on the diaries of real-life ethnologist Theodor Koch-Grunberg and botanist Richard Evans Schultes, the two narratives primarily illustrate how the insidious effects of colonialism take root over time, even when the intentions of white interlopers are otherwise moral and virtuous. Theo plays kind and generous with some villagers by dancing and singing in their native tongue, but quickly turns sour when he finds out they’ve pocketed his compass because he fears their entire method of navigation will be corrupted by technology, an idea that Karamakate gruffly dismisses (“Knowledge belongs to all men,” he says firmly). Though Guerra depicts Theo as a genuinely curious scientist who acts sensitively towards the native populations, as well as paying off Manduca’s debt to his slave master, he still succumbs to an easily recognizable Western arrogance, unintentionally treating the indigenous culture as an exotic novelty to share with his Europeans peers rather than something in which to participate. The same thing is true of Evan: He’s respectful and patient towards Karamakate, but he becomes easily frustrated when Karamakate’s oblique, spiritual approach to their journey doesn’t yield desired results, eventually turning violent.

Exploitation of all stripes—economic, cultural, spiritual, physical—recurs throughout Embrace of the Serpent, from the repeated mentions of rubber barons who rape the land and torture the workers to frightening missions run by sadistic, maniacal leaders. In a disturbing late sequence, Evan and Karamakate find themselves in a mission run by a lunatic preacher who has convinced the natives that he is their Messiah; he deludes them into believing he can perform miracles but really provides them hallucinogens, forcing them to do his bidding at every turn. It’s Guerra’s vision of Hell, the logical conclusion to a system that abuses those most vulnerable, but Guerra also depicts the conditions necessary for such a system to flourish. Isolated from civilization, the Amazonian indigenous communities may follow the word of the plants and trees, and yet the mere hint of Western technology—a compass, a picture, a record player—brings a kind of magic into their lives, making them susceptible to further exploitation. Despite helping two white explorers decades apart, Karamakate expresses nothing but skepticism and resentment towards their actions because he has caught a glimpse of a spiritual realm, which renders material technology all but insignificant.

Though its themes of colonialist exploitation are potent in their own right, the major draw of Embrace of the Serpent is its setting, as it’s the first feature to be filmed in the Amazon Region of Colombia in decades. Guerra captures the haunted, mythical power of the jungle just by luxuriating in its disquieting sounds, and finding poetry in thickets, riverbanks, and isolated settlements. As anyone who has seen Herzog’s jungle films already knows, the practical aspects of shooting on location in the jungle are complex to say the least, and scenes of Karamakate and company paddling down the river demand attention simply because of their existence eventually taking on a hypnotic energy of their own. At its best, Embrace of the Serpent puts its audience in a trance-like state where the jungle functions as a mood unto itself—intense and passionate on one hand, but serene and awe-inspiring on the other. While the film itself can’t quite be described as oneiric, save for a crucial scene at the very end, it adopts a dreamy tone that comes from watching bodies adapt and maneuver their way through a large, more encompassing body. “…I find it impossible to describe in words its beauty and splendor,” reads the quote that opens the film; though Embrace of the Serpent features plenty of words about the conflicts between white European colonialists and the native populations, sometimes too many words in fact, Guerra never articulates the jungle because it speaks for itself.