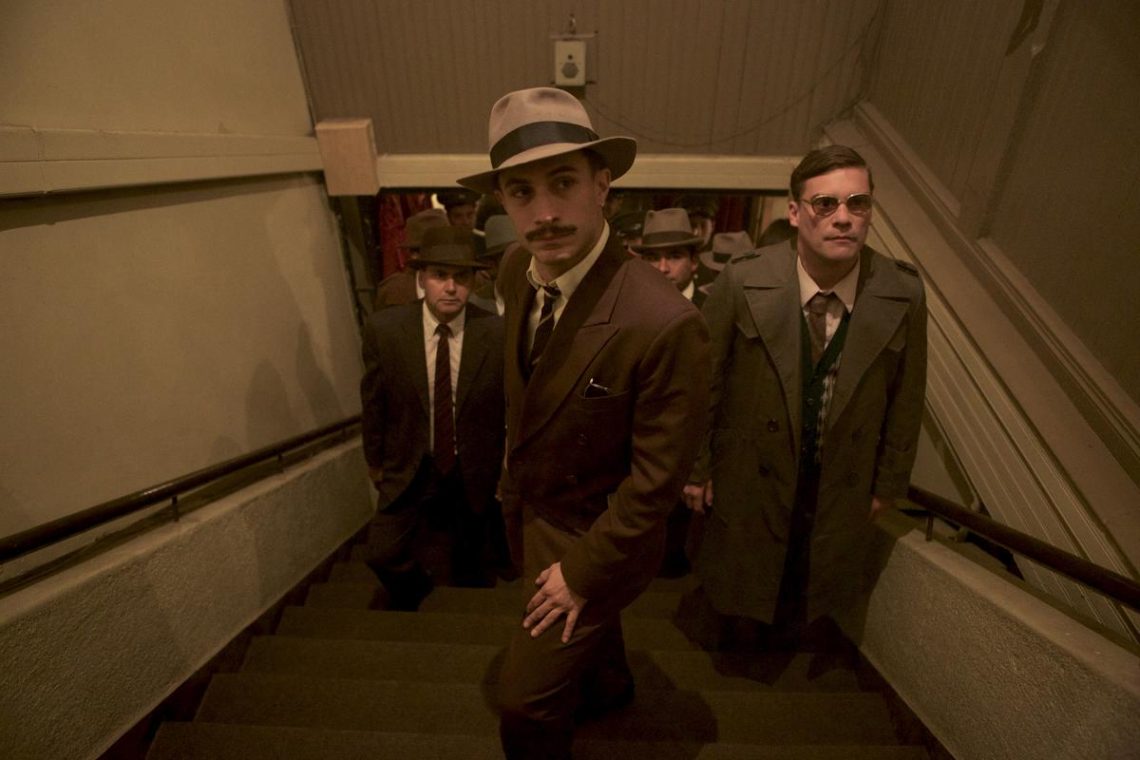 In this week's critic-at-large column, Mallory Andrews looks at the second of two biopics directed by Pablo Larraín in 2016: "Neruda."

My first memory of being aware of Pablo Neruda is from when I was 13, around the time I discovered the Rent Broadway cast recording. In the first act’s closing number, “La Vie Boheme,” the musical’s ragtag group of artists and intellectuals exuberantly dance on the tables of their neighbourhood café, expounding the anti-capitalist virtues and cultural markers that reflect the values of their starving-artist generation. However superficial, it’s still the first thing I associate with the Chilean political poet. The reason I bring this up is not to fall back on the fashionable lede-writing convention of relating every piece of criticism about me and my personal experience (not entirely, anyway). The Rent connection makes an important point about the context in which Pablo Neruda has been co-opted by a hip, culturally conscious Anglophone popular culture (Neruda, incidentally, rhymes with “Buddha” and “Uta [Hagen]” in “La Vie Boheme”). Even today, when perusing local independent gift shops, it’s not unusual to find volumes of Neruda’s Twenty Love Poems and A Song of Despair among the locally curated artisan wares.

Here is where Neruda, the second of two biographically inclined films released in 2016 by Chilean director Pablo Larraín (Jackie), attempts something of a corrective to this popular image, re-contextualizing the diplomat and poet’s political legacy. The film covers the roughly 18-month period when Neruda (Luis Gnecco) and his wife Delia del Carril (Mercedes Morán) were forced into hiding after he publicly criticized the Chilean government and proclaimed his allegiance to the Communist Party. At the behest of President Gabriel González Videla (Alfredo Castro), police detective Oscar Peluchonneau (Gael García Bernal of Larraín’s Oscar-nominated No) is tasked with hunting down and arresting the political fugitive.

Larraín has referred to Neruda an “anti-biopic,” by which he means a biopic that doesn’t take fidelity to the truth particularly seriously. This is a laudable goal, as biopics too often stumble as satisfying pieces of filmmaking when trying to adhere to a supposedly objective version of events. But constructing Neruda as sort of a “Nerudian” free-verse poem, mixing a variety of genres and tones, only sporadically holds together. García Bernal’s running thread as the dogged Inspector Peluchonneau has elements of both a hard-boiled film noir (complete with brusque Philip Marlowe-esque voiceover) as well as Les Misérables’ obsessive Javert v. Valjean cat-and-mouse pursuit. Peluchonneau is concerned with living up to the memory of his father, the former chief of police, and effectively erasing his past as the bastard son of a prostitute. But in a bit of half-hearted meta-textuality, Peluchonneau is suggested to be an invention of the crime-fiction-obsessed Neruda (and is, indeed, invented for the film by Larraín). To what end is unclear, other than as a contrast to the fugitive Neruda’s contemplation of his own legacy and myth.

The presentation of Neruda himself is also a muddle of meta-commentary and historical signposting. Larraín has Gnecco re-enacting famous images of Neruda while he simultaneously muses in private with Delia about the creation of his myth and the lasting effects of his artistic influence. There is little concern to explore beyond Neruda-as-legend: a late Western-inflected sequence in the film has Peluchonneau chasing the poet on horseback through the snowy Andes. Neruda howls into an open plain, his voice echoing and severely spooking Peluchonneau. Likely, Neruda is supposed to be more myth than man at this point, but the abject terror on García Bernal’s face is nothing short of ridiculous—I burst out laughing.

The real trouble is that Neruda is never regarded as anything but a figure of mythic status by his allies. Delia, a talented artist in her own right, regards him with nearly unconditional admiration, willing to sacrifice herself for him at a moment’s notice with little explanation as to why he should be afforded such a privilege. He beguiles his ardent supporters across the social classes, simultaneously regaling his bourgeois compatriots with recitations of “Tonight I Can Write (The Saddest Lines)” and performing acts of generosity and solidarity with his downtrodden countrymen. If anyone in the film suddenly jumped onto a café table to sing Pablo’s praises like the bohemians of Rent, it wouldn’t be entirely out of place: an appreciation as shallow as what was presented in the Tony-winning musical.