In this week's Critic-at-Large column, Mallory Andrews reviews "The Invitation" and "Neon Bull."

There are few cultural customs with more built-in tension than dinner parties. Often an excuse to mix disparate friend groups, invitees make stilted small talk over a few too many drinks. What should be a relaxing casual hangout is imbued with unnecessary formality. Hosts hover between entertaining guests and applying their amateur cooking skills to slightly too-elaborate recipes. Then there’s the awkward ballet of corralling the herd from the pre-dinner staging area and into the dining room. Food is needlessly fussed over (and in the age of Instagram, thoroughly documented), and stories and jokes are met with overly raucous laughter. Should anything look or feel out of the ordinary, the social contract dictates politeness above all—one must never point out the evening’s flaws to the host.

It’s for exactly these reasons that that dinner parties have enjoyed a storied place in cinema history. They’ve been used to poke holes in the ridiculous politesse of high society, as in Luis Buñuel’s one-two punch of The Exterminating Angel (1962, in which guests find themselves inexplicably unable to leave a dinner party) and The Discreet Charm of the Bourgeoisie (1972, in which guests find themselves inexplicably unable to sit down to eat). The social niceties have proved a fertile backdrop for murder mysteries, as The Thin Man (1934), Rope (1948), Murder by Death (1976), or Clue (1985) can attest.

Cinematic dinner parties have enjoyed a modern resurgence as a framework upon which to play with genre conventions. The mumblecore-esque awkward family meal is violently interrupted by masked home invaders in the underrated horror flick You’re Next (2011). A gathering of friends over a dinner table becomes the locus for strange sci-fi happenings in Coherence (2011). And Karyn Kusama (Æon Flux, Jennifer’s Body) delivers her most accomplished work yet, The Invitation, a thriller that revels in the inherent strangeness of the dinner party social contract.

In The Invitation, Will (Logan Marshall-Green) and his girlfriend Kira (Emayatzy Corinealdi) have been invited to a dinner party hosted by Will’s ex-wife Eden (Tammy Blanchard) and her new husband David (Game of Thrones’ Michiel Huisman). Adding to the discomfort are the presence of the ex-couple’s former circle of friends, as well as a couple of Eden and David’s odd new acquaintances (Lindsay Burdge and the always-great John Carroll Lynch). As the evening progresses, Eden and David’s strained behavior becomes increasingly strange, and Will suspects that they have more in store for their guests than just a friendly dinner.

The reveal fairly early on in the film that Eden and David are members of a cult (known as “The Invitation”) is a shrewd move by Kusama. Instead of drawing tension from a drawn-out mystery of what exactly is up with their weird hosts, she mounts suspense in the ways the guests react to this revelation. Propriety demands politely indulging Eden and David’s espousal of The Invitation, expressed as benefit-of-the-doubt curiosity, inappropriate jokes and one-liners, and a singularly uncomfortable party game.

Only Marshall-Green’s Will refuses to buy into the absurdity. He functions as our gateway into the party dynamics, both narratively (we follow him into the fray) and emotionally, as he reacts as an impartial observer to events, calling out bullshit with impunity. But this is merely a cover for Will’s true motivation. Long-haired and bearded, Will bears the weight of a past trauma (a trauma shared with Eden) that threatens to bleed through his carefully composed façade. The threat of physical violence is ever-present, but the true animating violence of The Invitation is emotional trauma. It cuts to the quick, taking precedence over any adherence to decorum.

There is a single image in The Invitation that walks this line between unease and composure: a bird’s-eye tracking shot over the dinner table, rendered in slow motion, luxuriating over steaming food which glistens in a way that is simultaneously mouth-watering and grotesque. The moment is merely an appetizer for the shattering climax but, like trauma, it indelibly lingers. 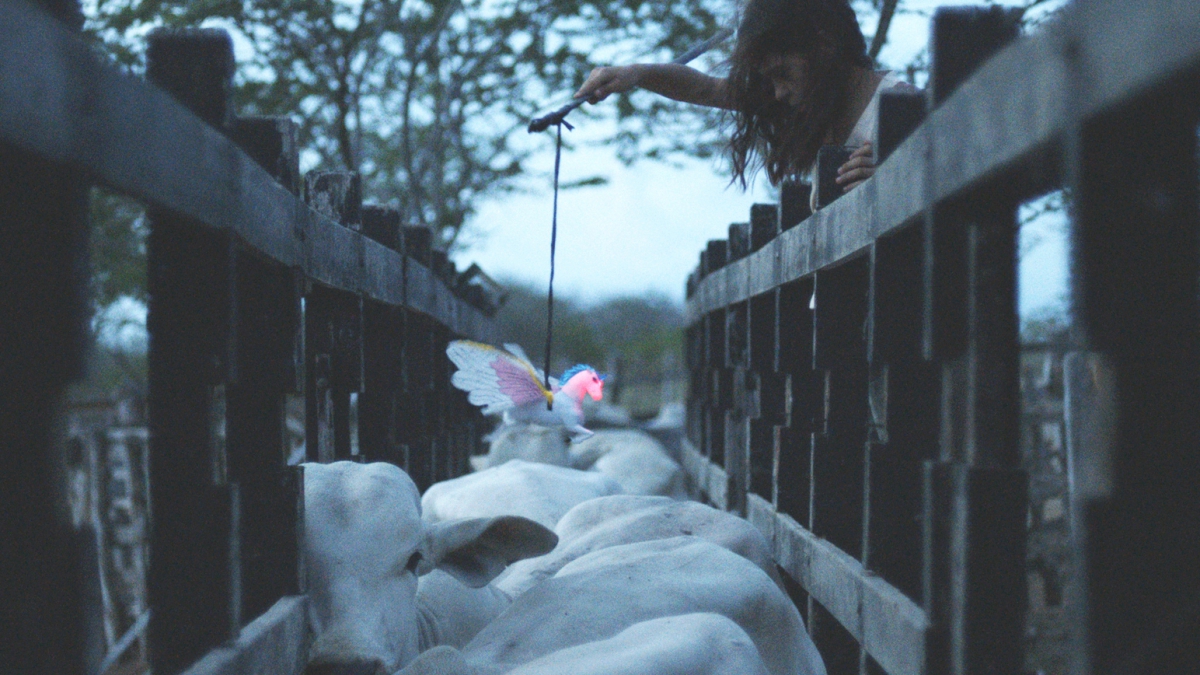 A recent Toronto repertory screening of Howard Hawks’ 1939 masterpiece Only Angels Have Wings, in which a troupe of cargo pilots (led by Cary Grant) fly death-defying mail routes through the Andes Mountains, awakened a fondness for movies that depict off-the-beaten-path jobs in far-flung places. I was reminded again of this particular pleasure while watching the gorgeous Neon Bull, Brazilian director Gabriel Mascaro’s second feature following his award-winning debut August Winds in 2014.

The film follows the traveling employees of a Vaquejadas, a type of Brazilian rodeo in which the main event involves two men on horseback competing to take down a bull by grabbing its tail (the “Neon Bull” of the title referring to a blacklight after-hours version of this event). Stuck together in constant close quarters on the road, the workers form a familial bond. Among them are Galega (Maeve Jinkings) the resident truck driver and exotic dancer, her young daughter Cacá (Alyne Santana), chubby stable hand Zé (Carlos Pessoa), and the ostensible protagonist Iremar (Juliano Cazarré) a cowboy whose true passion lies in designing and tailoring women’s fashion.

The minutiae of rodeo life depicted in Neon Bull have the quality of a fly-on-the-wall documentary, dropping us into the middle of a typical week of the Vaquejadas troupe. The friction of rubbing sand into bulls’ tails for traction; bare feet slipping through mud and shit; close-ups of steers’ white flanks as they’re herded from holding pens to trucks. Never have the quotidian details of stable work been rendered so sensuously.

It’s a nearly plotless narrative, but the familial dynamic between the coworkers compelling enough on its own. They bicker with one another, they support their aspirations, and occasionally talk each other into harebrained schemes—one such half-cocked plan concocted by Zé and Iremar culminates in a memorable money shot (yes, in the Biblical sense).

Perhaps most remarkable is the way Mascaro deals with Iremar’s yearning, not as a high-stakes goal to achieve, but an everyday state of being. His dream of making women’s clothing is always on the periphery of his mind (he takes it upon himself to design the flashy costumes for Galega’s horse-themed exotic dance acts), but film’s treatment of Vaquejadas life, ongoing and persistent, suggests this desire is unlikely to be fulfilled. This yearning expresses itself in a lengthy sex scene, as desire and longing finally bubble over into a steamy set-piece. It’s desperate and fleeting; uncomfortably intimate yet undeniably sensual—a microcosm of Neon Bull’s depiction of humanity.