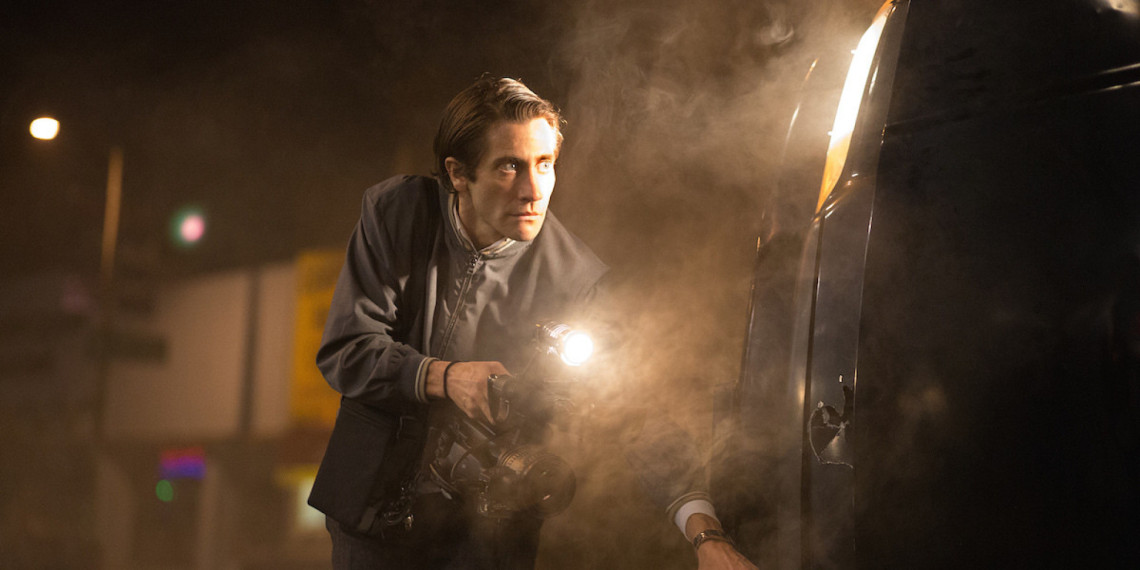 Meet Lou Bloom. He’s a young, ambitious go-getter, a diehard professional always on the lookout for good career opportunities that offer plenty of upward mobility. He’s also a charming psychopath, which is a nice way of saying that he’s a snake wrapped up in Jake Gyllenhaal’s clothing. Lou is a passionate man, but he’s passionate for one thing only, and over the course of Nightcrawler, Dan Gilroy’s directorial debut, you’ll find out exactly what that is. Be warned, though, that by the time the film ends, you may find yourself wishing you could forget his leering, bug-eyed visage and dismiss his superficial graces.

Nightcrawler is the kind of movie a critic is hard-pressed to qualify as “good”. It absolutely is good, and don’t let anybody tell you differently. But it’s the kind of “good” that will increasingly unsettle you long after you’ve left the theater. You will laugh at Nightcrawler, but mostly out of discomfort, and when you do, your laughter will catch in your throat. You may even be amazed at how lovingly Gilroy captures the grimy, lurid beauty of Los Angeles, which remains as shady by day as by night. But mostly, you’ll be entranced by Gyllenhaal, the film’s centerpiece, who continues his 2014 campaign of self-reinvention by topping his work in March’s excellent Canadian production, Enemy.

That arachnophobic joint cast Gyllenhaal in dual roles. Here, he pulls off nearly the same trick by portraying two very distinct sides of the same person. One moment, Bloom is trying to win over his peers with his unwavering gaze, wolfish grin, and business acumen. The next, he’s subtly threatening them with physical or psychological harm, and he pivots between these two axes like flipping a light switch. Bloom, as we meet him, is a scoundrel and a thief, and also a murderer; nobody sees that but us, though, so as he doggedly pursues every chance he sees to work, we’re in on his game while everybody else dismisses him as a weirdo. (They’re not wrong to, either, but they do so at their own peril.)

One fine eve, Bloom sees a flaming car wreck on the side of the highway, and, more importantly, the freelancing “nightcrawler” team (led by a wonderfully unctuous Bill Paxton) who barge onto the scene with cameras in tow, ready to capture and sell every intimate, agonizing moment to the highest bidder. It’s a transformational moment for Bloom, who spends the rest of Nightcrawler learning the tricks of the trade and building his brand as a ruthless gatherer of video news. And that’s the film in a nutshell; it’s a character study melded together with a critique how of violence in media draws viewers toward barbarity like moths to a flame. The commentary here is familiar, but Gilroy – who identifies with Bloom as a director of sorts on some primal level – employs his barbs smartly.

Nightcrawler isn’t a horror movie, per se, but the underlying truth of Bloom and what he represents is horrifying. The film feels like a riff on The King of Comedy as well as a fruitfully extended episode of Tales From the Crypt; what’s scary about it has nothing to do with ghouls or ghosts but with human callousness. Nobody cares how Bloom obtains the footage he brings to ratings starved news director Nina (a terrific, smoldering Rene Russo), or that his materials are inevitably tinkered with to achieve the maximum desired effect from everyone watching at home. (Nobody but Kevin Rahm and Michael Hyatt, that is, but their pleas and suspicions fall on adders’ ears.) The plan is to get a rise out of their audience, and it works like gangbusters, twofold. All the while, Bloom’s face, darkened in the gloom of Russo’s control room, lights up with sinister glee.

Unnerving chills runs through scenes like this, which wag a finger at broadcasters who manipulate news for profit. But make no mistake: though Nightcrawler’s world resembles ours, it’s as far off from real as a “real” movie can get. Movies like this operate on dream logic. If you can’t accept this logic, then Gilroy won’t be able to sell you on his vision, a fantasy concoction of true crime and amoral journalism. The film roots its genuine, macro concerns in the culture of sensationalism, but they’re subsumed by the micro fear Gyllenhaal embodies in his brilliant performance. At first, Bloom appears to be a cog in the media machine; he’s harmless, just a creep with a video camera. But then he begins to influence people around him with his heartless corporate outlook, and he becomes more than just a symptom of the problem. He’s a predator, and L.A. is his hunting ground. It’s enough to make you want to avoid the Golden Coast altogether.