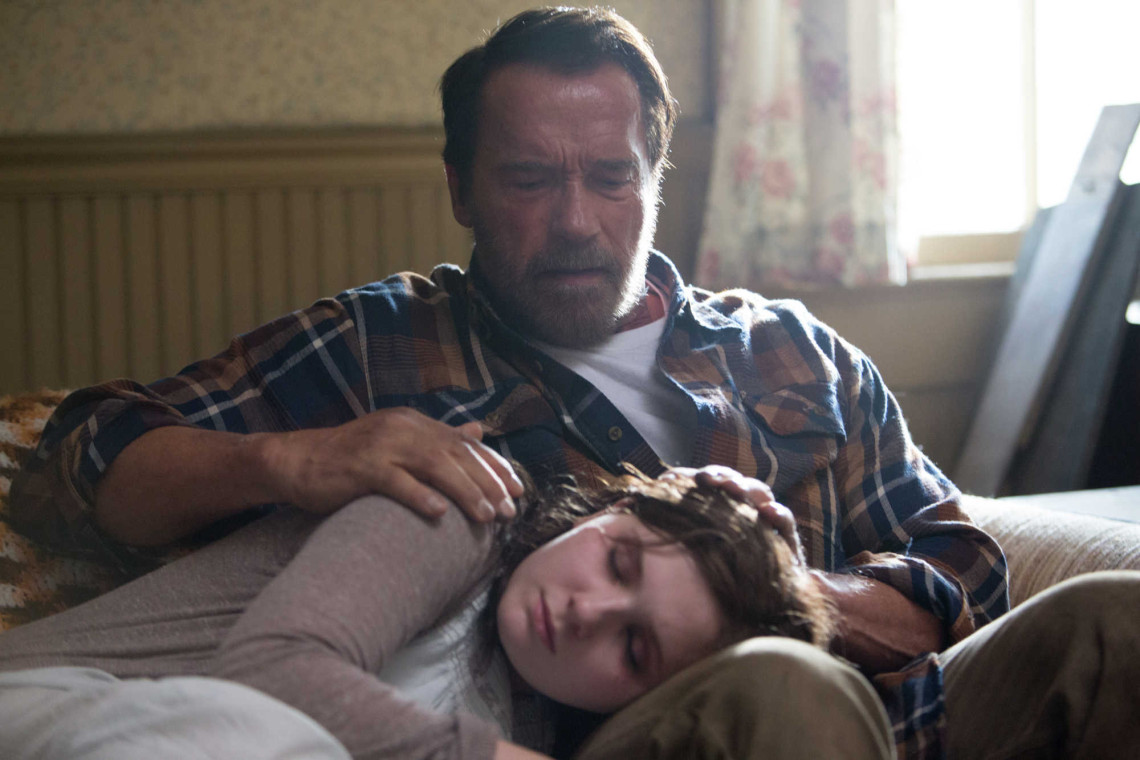 In a grim, vaguely future-ish American Midwest, crops are burned and cities are on lockdown under the threat of a zombie plague. Of course, the word “zombie” is never used, but the audience knows what’s up — rotted victims shamble around moaning and biting people. Farmer Wade Vogel is doing his best to keep his family safe, but has to prepare himself for a tremendous sacrifice when his wayward teenage daughter Maggie comes home with an infected bite on her arm and roughly a month to live. As time wears on, both of them grapple with what’s coming, and just what action Wade will take when Maggie is no longer herself.

Maggie might have gone completely under the radar, appreciated mainly at Fantastic Fest and by horror aficionados, were it not for the fact that it features Arnold Schwarzenegger. (As Wade, not Maggie. Obviously.) The hulking action star turning up in a low-budget, low-key drama has been a source of curiosity for many, and it’s an effective draw for the film. The most immediate question on potential viewers’ minds will be, “Is he any good in it?”

The answer is “Yeah, pretty good,” although I’d dispute the built-in assumption that Schwarzenegger isn’t a good actor. The man’s consistently brought chunky charisma to his parts. There’s a reason he made it big in Hollywood besides the hulking musculature. But in Maggie, he’s admittedly doing something quite different. He’s more subdued, of course, but also carrying the kind of burden that’s heavier than any gatling gun / giant log / Predator. Maggie is nominally a zombie film, but remove the sci-fi element and it’s easily any other story about a parent processing the impending loss of a child. It’s a painful form of grief for someone who’s still with you. In that respect, zombiism would be a perfect metaphor, since the deceased is literally still walking around.

However, Maggie (played with sympathetic uprightness by Abigail Breslin) is alive for most of the story, which dodges the full potential of the premise. Still, the interaction between Breslin and Schwarzenegger, though never fully convincing as a lived-in father/daughter relationship, spikes some strong moments through the heart. In particular, whenever Maggie’s “condition” acts as the impetus for conflict between Wade and his neighbors or the authorities, Schwarzenegger gets to cut loose, embodying absolute parental devotion as a papa bear (the beard helps).

Maggie is a world of desaturated greys; a dispiriting, ashen tour towards the end of life. It’s slow and solemn and only has perhaps one jump scare, a far cry from what we’re used to in its genre. Schwarzenegger has brought us a genuine weepy, which is unexpected but not unwelcome.