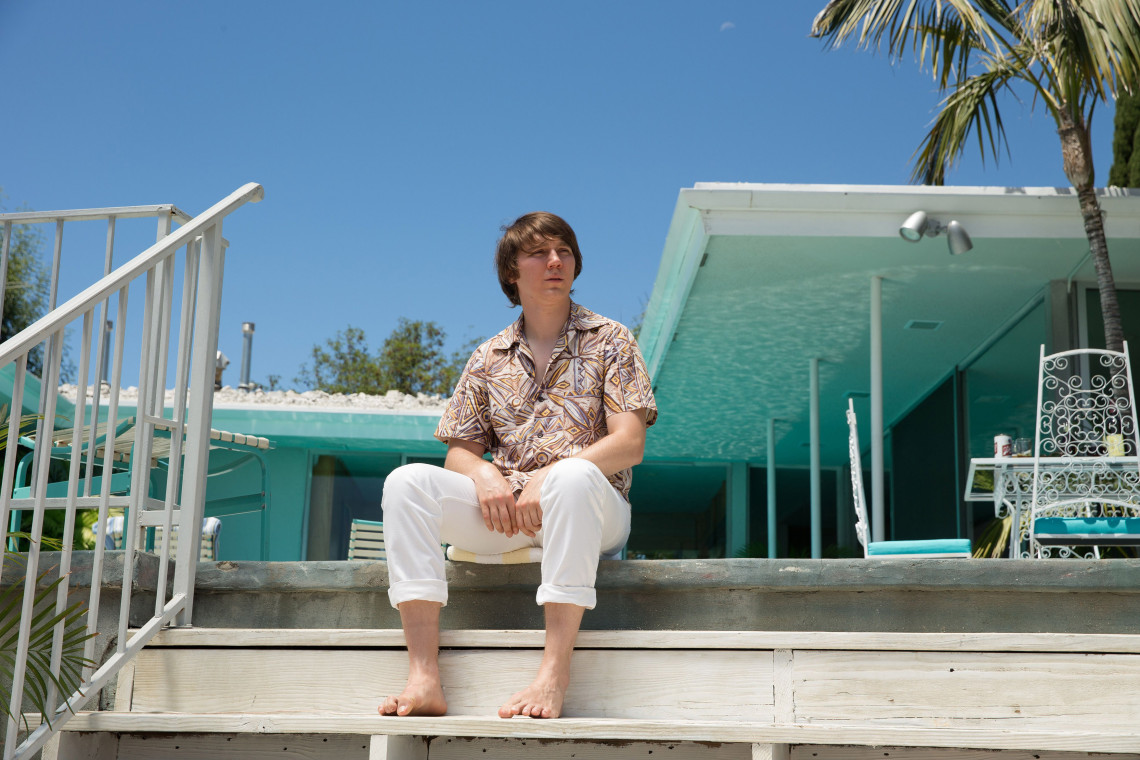 Brian Wilson is one of the most extraordinary musicians to ever take on this world, given the lifetime of drama he’s endured and the masterpieces that he’s transported from inside his head into studio sessions. His life narrative of pop compositions, a lost masterpiece, and abusive collaborations is a saga of delicate creative influence. A once-in-a-lifetime genius birthed a perfect album (Pet Sounds) but then struggled to find productive stability within his environment or within the fragile mental state that could inspire his music. Even his recovery brought turmoil to his life, as he became a puppet to control freak therapist Eugene Landy, separating himself from The Beach Boys as their nostalgia lifeblood creed of “Do It Again” further became the antithesis to Wilson’s progressive, vitalizing artistry. Director Bill Pohlad’s biopic Love & Mercy captures Wilson’s singular mind at two ventures in his life, creating Pet Sounds and the Landy years, with filmmaking that’s far more harmonious than its contrasting performances.

Paul Dano is perfectly cast as Pet Sounds-era Wilson, immersing himself in the mind state of the young songwriter during the time that his genius ran wild the most. True to his own skill, Dano has excellent dramatic control of Wilson’s vulnerable presence, recreating his complicated psyche. Dano builds an immense feeling of hope for the musical figure during the years of Pet Sounds, while deftly portraying the silent torment that later took hold. Best of all, Dano provides a human understanding to that sense of elusive spiritual perfection within Wilson’s music, when a twenty-something Californian pop songwriter ditched the surf scene, and strived to orchestrate perfect songs, what he called “pocket symphonies to God.” Scenes in which Dano is shown creating Pet Sounds are a gift of Dano’s body and soul to the legacy of Wilson, providing the finest portrayal of the musician we might ever see.

Love and Mercy mashes its on-the-nose notes when it comes to the story of the older Brian Wilson, played by John Cusack, as car saleswoman Melinda (Elizabeth Banks) falls in love with the psychologically unwell Beach Boy, and sees first-hand how much the fragile songwriter is controlled by his therapist Landy (Paul Giamatti). Though this movie offers the Brian Wilson saga a dramatic conclusion—from manipulative influences into the final embrace of true love—its purpose is reduced to a gender-reversed Rapunzel mission. At best the film provides exposition about the unfilmed episodes of Wilson’s life; at worst it’s an overview that offers scant biopic justice to this bizarre period, which involved a ghostwritten autobiography and many strange songs, for which Landy originally had credit for.

Sauntering into this project with his High Fidelity music credibility, Cusack’s turn as Wilson has much of the same charisma-killing stubbornness as his most drab roles, in which watching a humdinger like 2014’s Drive Hard relies more on looking at Cusack, not the actual character he’s playing. Cusack works to embody Wilson with glaring physical gestures, like softening his voice, darting his eyes, and slumping his arms, but the actor is never once lost within the character. There is no complication behind Cusack’s scattered eyes. Cusack is only doing an impression of what Dano is more diligently accomplishing. Dano is game to play piano in his scenes or to gain weight (30 pounds), while Cusack excuses himself to the same type of embodiment he did for playing Richard Nixon in The Butler, by pretending he’s a blank canvas on which the audience must project a historical figure on.

Try as Banks might in giving an earnest performance within a limited role, Giamatti assists Cusack in numbing this life chapter by matching his one-dimensional presence. Though playing the most complicated villain in Wilson’s life (complicated insofar as Landy’s own motivations being compounded by the way in which he did help Wilson), Giamatti treats Landy with typical potbelly malevolence. Giamatti at least embraces make-up, but the wig he adorns is laughable from its first scene.

Though Pohlad intelligently eschews chronological storytelling, Love & Mercy can’t avoid goofy expositional dialogue that sacrifices slickness in order to put important characters in place. In creating the historical context of the music, Love and Mercy is far stronger with its Easter eggs production design, in which fans wills notice Wilson’s famous piano in the sandbox, or the various outfits duplicated from Pet Sounds studio photography.

As an expressive portrait of Wilson’s career, the film’s narrative mirrors the depicted life of its subject, with numerous ups and even more downs. There are moments in Love and Mercy in which the biopic reaches close to perfection, if not grabbing it. Inversely, there are scenes that are hokier than “Smart Girls,” a YouTube-it-if-you-dare 1991 rap song that Wilson “wrote” under the influence of Landy, like any moment in which Cusack and Giamatti are acting at, not opposite of, each other. But as much as their familiar, safe, dare I say Mike Love-ian efforts in half the movie compromise the possibilities of Wilson’s story, it’s the soulful strokes from Dano and company in his half that win out. Wilson has always been bigger than his greatest hits.