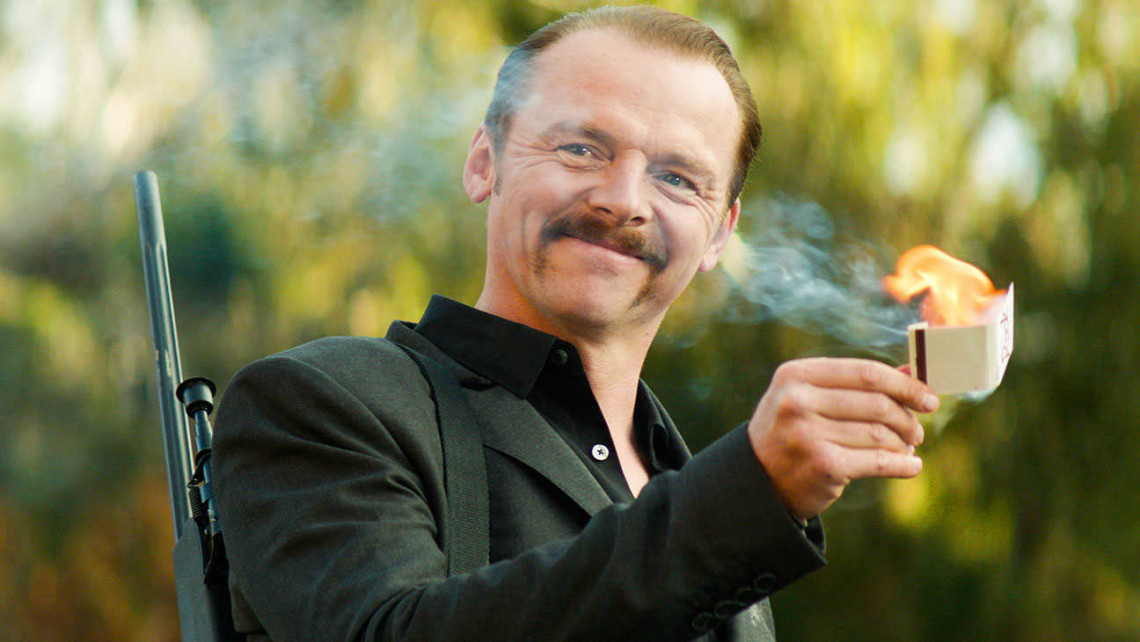 A tale of mistaken killers and coincidence becomes tediously tangled in Kriv Stenders’s Kill Me Three Times, a suicidal experiment with narrative. Cinema may arguably thrive on filmmakers’ abilities to pioneer new forms to present the same stories, but Stenders’s supposed cleverness is all surface, artificially creating its “twists” by playing a frustrating and ultimately unrewarding game of nonlinear hopscotch.

Here’s the story straight, without the film’s editing to muck it up for you: Scowling bar owner Jack (Callan Mulvey) hires a hitman named Charlie Wolfe (Simon Pegg) to stalk his wife Alice (Alice Braga). When Jack finds out that she is indeed cheating on him with mechanic Dylan (Luke Hemsworth), he assigns Charlie to kill her. Meanwhile, Jack’s irritated sister Lucy (Teresa Palmer) and her dentist husband Nathan (Sullivan Stapleton) owe gambling money to a crooked cop named Bruce (Bryan Brown). In need of a huge chunk of cash, they kidnap Alice, swap her dental records with Lucy’s, and try to get insurance money by placing Alice in a fatal car accident.

It is soon revealed that Alice actually escaped from the accident, and that Charlie watched Lucy and Nathan try to kill her. Looking for a bigger payday while also able to take credit for killing Alice, Charlie blackmails Lucy and Nathan, while Bruce pursues the insurance money from an accident that he thinks happened.

These events are depicted in a disastrous mix of tones, with a character’s initial melodramatic intent failing to blend convincingly with the film’s black-comic execution. Sadly, none of the actors involved are able to successfully embolden the script’s tonal ambitions. Initial selling point Pegg can’t preserve the tale’s gallows humor even with a villainous handlebar mustache, his goofiness outdone by his character’s ringtone preference. As for Braga and Palmer, they’re forced to roll with characters who aren’t nearly as interesting as what happens to them. They receive no help from their romantic counterparts, who offer stock shades of masculinity without any surprising variation.

When playing with these characters, Stenders and first-time writer James McFarland toy with a flighty, back-and-forth storytelling structure that inspires nothing but irritation. Kill Me Three Times jumps from steps 1 to 2 to 4 to 7, and then returns to the previously skipped segments in the next act. This is how the movie attempts to make itself interesting: by not telling you something, so that it can fill you in on it later.

In this regard, Kill Me Three Times inadvertently testifies to the key rule about twists, especially in films. The best twists—think Rosebud in Citizen Kane or Keyser Söze in The Usual Suspects—involve a mystery that the viewer is invited to share with the characters; such twists work because we are allowed to become emotionally invested in what happens to the people involved. It doesn’t work when a storyteller is interested only in tricking the audience, as is the case in Stenders’s film; that’s just lazy manipulation, for no higher purpose except to set up a cheap surprise at the end. The irony of this entire failed experiment is that once its nonlinear attitude is untangled, it all feels pretty self-sabotaging. The film’s episodes of back-stabbing, mistaken identities, and unexpected acts of violence are kooky enough on their own, without the need for any of this helter-skelter storytelling.

But whether or not the story makes enough sense when all has been revealed, Kill Me Three Times is damned most of all by its tackiness. Outdated in its surf-guitar score with a few whiffs of a rotten Tarantino influence, Stenders’s film is grossly enamored with its own pseudo-clever tactics. Underneath all the narrative and aesthetic game-playing, Kill Me Three Times is little more than a gimmick: desperate to dazzle, but with precious little to offer. It’s the Guy Fieri of pulp fiction.