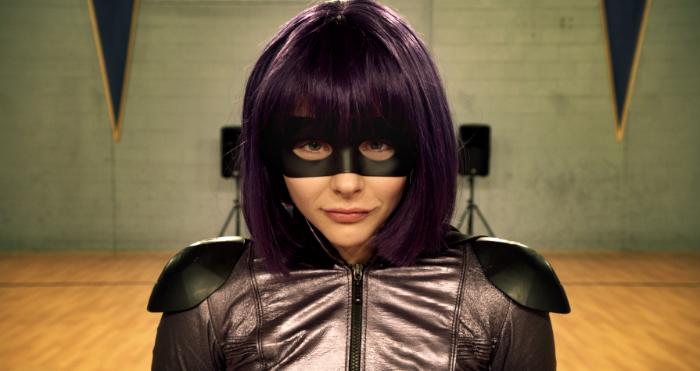 ‘Kick-Ass 2’: Lame, Obligatory, and With Nothing Subversive to Say

Despite having hung up the mask at the end of the original, Kick-Ass 2 sees bespectacled high-schooler Dave Lizewski (Aaron Taylor-Johnson) once again don the identity of costumed crime fighter, Kick-Ass. The reason? Well, there wouldn’t be a sequel if he didn’t, would there? After a few weeks of training with his one time partner, the foul-mouthed, nun-chuck wielding fifteen year old Mindy Macready, aka Hit-Girl (Chloe Grace-Moretz), Kick-Ass hits the streets, quickly aligning himself with a newly formed group of DIY vigilantes led by mob enforcer turned born-again-Christian, Colonel Stars and Stripes (Jim Carrey). Unfortunately, it’s around the same time that another former ally, Chris D’Amico, aka Red Mist (Christopher Mintz-Plasse) re-emerges as a super-villain calling himself The Motherfucker. And he’s got a plan to end Kick-Ass once and for all.

While Kick-Ass never quite reached the subversive heights it aspired to, director Matthew Vaughn, thanks largely to the eyebrow raising performances of Nicholas Cage and the then just thirteen year-old Moretz, still managed to generate enough bursts of shocked laughter to make the endeavor worthwhile. The same cannot be said of Jeff Wadlow’s follow-up, a project that by its very nature as a sequel already undercuts any critique it might be attempting to make about the endless barrage of superhero movies making millions at the box office each year (in one moment of what is presumably intended as meta commentary, Dave is seen sporting a T-shirt that reads “I Hate Reboots”. The irony would be amusing if the film weren’t so resoundingly mediocre).

Indeed, the novelty of the extreme language and kinetic carnage having well and truly worn off, Kick-Ass 2 really does just play like any other generic comic-book movie cash grab. As Kick-Ass and Hit-Girl debate the merits of returning to the game or settling down to live normal teenage lives, viewers are treated to endless speeches about what it means to be a hero, the clichéd, straight-face nature of which don’t gel at all the over-the-top bloodshed (or juvenile gross-out gags) that the film so unrepentantly trades in. Tonally disastrous, the movie attempts to depict gruesome violence as serious one moment and hysterically entertaining the next (a played-for-laughs attempted rape scene is one of the most tasteless moments in recent cinematic memory).

The returning cast do as much as they can with the material, but Moretz especially is hamstrung by a dire subplot involving a mean spirited clique of high-school girls that couldn’t possibly be more cringe-worthy (or unrelated to the A-story). Mintz-Plasse, too, feels largely separate from what’s going on with Kick-Ass, the Motherfucker’s so-called arch nemesis only becoming aware of his enemy’s reappearance two-thirds of the way through the movie (through another particularly atonal moment of pretty harrowing violence). The most high-profile newcomer is undoubtedly Carrey, but those hoping an outlandish turn to rival Cage in the original are in for a seriousness disappointment – in fact, it’s one of the most unremarkable performances of the comedian’s entire career.

There are a few bright spots where the satirical material shines through: a throwaway gag about depressing superhero origin stories, and a visual involving The Motherfucker’s pet shark, are the two that really stand out. But as the film reaches its climax, one that involves, unsurprisingly, a whole lot of masked characters beating the hell out of each other, you realise how rote it’s all been. Perhaps the truly subversive thing to do – a way to really turn audienes expectations on their heads – would have been to end the film without bloodshed at all.  Ultimately, the most unappealing thing about this Kick-Ass sequel is its hypocrisy. It preaches heroism while reveling in sadism. That it’s so sloppy in doing so just makes things that much worse.

One thought on “‘Kick-Ass 2’: Lame, Obligatory, and With Nothing Subversive to Say”