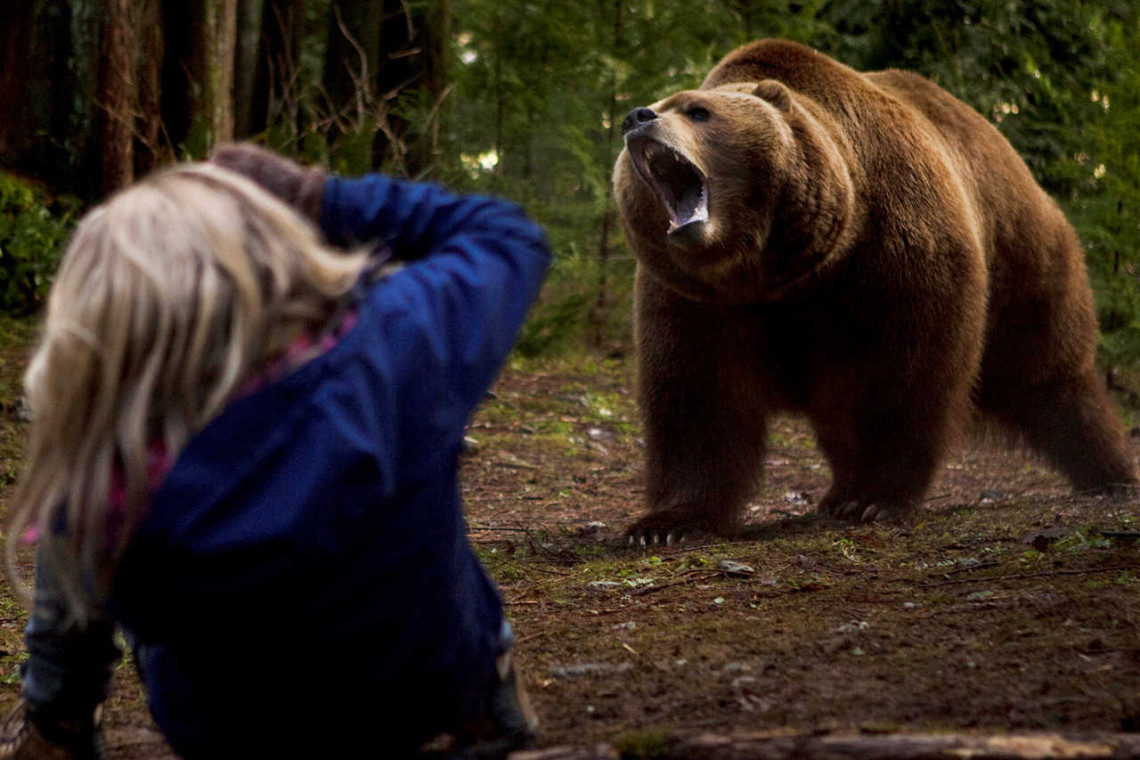 “Into the Grizzly Maze”

Not exactly terrible, at least as far as this sort of nature-spolitation schlock goes, Saw V director David Hackl’s Into the Grizzly Maze strands an overqualified cast in the Alaskan wilderness to work out their longstanding family grudges with a thousand-pound, seriously pissed-off bear on their trail. Things actually work out pretty well for them, considering the circumstances.

The rather unconvincing James Marsden stars as a weary ex-con returning to his hometown after a 7-year prison stretch, looking for his pricelessly named pal, Johnny Cadillac (Adam Beach), who went missing after taking some nasty poachers on a big game expedition. It seems that the local sheriff (Scott Glenn) has been lining his pockets allowing all sorts of illegal hunting practices and bootleg logging operations, upsetting the forest’s delicate ecosystem enough to earn the ire of an especially quick-tempered grizzly.

This all comes as a surprise to the sheriff’s deputy (Thomas Jane) who proudly boasts of putting away his hunting rifle and converting to conservationism, now collaring and trying to save the bears he used to kill as a kid, thanks to the influence of his deaf-mute, nature photographer wife (Piper Perabo). Oh, the deputy also happens to be Marsden’s big brother, and the medic (Michaela McManus) turns out to be our con’s old high school girlfriend. I guess this is a pretty small town.

The crew quickly winds up on the run from this admittedly magnificent beast, hashing out old resentments and unfinished emotional business, while the only person talking any sense is slightly deranged local legend Douglass, played with a toothsome grin by Billy Bob Thornton. Off his rocker after a decades-ago close encounter with a grizzly, Thornton sinks his teeth into the Captain Quint role and chews up portentous Herzog knock-off monologues about the cruelty of nature. For some reason, he’s always wearing a cowboy duster and travels everywhere with a large white stallion at his side, cutting an absurd figure the actor appears to relish.

The screenplay (by Guy Moshe and J.R. Reher) is chock full of noble environmental concerns, all of which are pretty much negated by Hackl’s kill-crazy, charnel-house direction. As one would expect from a Saw auteur (he worked as production designer on installments II-IV before helming the fifth), Into the Grizzly Maze features a ton of severed limbs, gallons of viscera, and Thornton spends the third act nonchalantly strolling around with a spectacular gaping facial wound that, considering his behavior, must be a good deal less painful than it looks.

There are some effective jump-scares, some of which are undone by chintzy CGI effects including the most laughably unconvincing digital fire since MAPS TO THE STARS. Mostly, this just put me in the mood to re-watch Lee Tamahori’s great, woefully underrated 1997 thrill-ride The Edge, in which Anthony Hopkins and Alec Baldwin muscle their way through a David Mamet psychodrama of the “did you fuck my wife?” variety while being pursued by a bear that symbolically stands in for their monstrous, masculine ids.

Nothing nearly as interesting occurs in Into the Grizzly Maze’s banal family melodrama. Do you think these feuding brothers will put aside their differences and learn to work together?  Do you think nice-guy Marsden was wrongfully convicted?  Does a cliche shit in the woods?