The Collaborative Nature of Dance and Film: Anna Rose Holmer on “The Fits”

Andrew Crump talks to filmmaker Anna Rose Holmer about the themes of dance, collaboration, and teamwork in her film The Fits.

In The Fits, the debut narrative feature from director Anna Rose Holmer, young Toni (newcomer Royalty Hightower) spends her days at a recreation center in Cincinnati’s West End, training to box with her brother while entertaining dreams of joining the local girls’ dance squad. Toni can’t dance, of course, but that isn’t a problem; she’s a determined and unflappable sort. All that stands in her way is the wave of inexplicable seizures striking down the girls on the team without rhyme or reason. Holmer’s coming-of-age tale is an ineffable blend of genre, technique, and perspective. Movie Mezzanine spoke with Holmer about The Fits, its talented star, layered allegory, and how collaboration on-screen and off is the film’s essence.

Movie Mezzanine: So I understand that this film was at least partly inspired by instances of real-life hysterics, or fits with teenage girls?

Anna Rose Holmer: Yeah. The seed for the film was looking at real, historic cases of hysteria and mass psychogenic illness and kind of breaking down some patterns, but the real foundation for the film was reimagining those kinds of subconscious or uncontrolled episodes as choreographies.

That’s an interesting take, and I think that if the audience doesn’t have the idea that this is about those real-life things, they certainly wouldn’t guess at it.

Yeah. A lot of the cases we looked at were medieval cases, but it continues to happen around the world in various degrees. Even after we were done shooting, there was some news in South America of an episode like this happening. So I wouldn’t say it is common, but it does prevail.

No, actually. When I started to think about this as a film, I explicitly wanted to move away from the nonfiction space. I’ve had the privilege to work in both fiction and nonfiction, and I like moving between those spaces. I think different films dictate different formats, and for this, from the very beginning I was thinking about it as a dance film in a narrative space.

Why did you specifically choose fiction over documentary in this particular case?

I was more interested in taking this real phenomenon and elevating it towards allegory, and I wanted to get into a space where facts were only part of the information that you were getting. We were also beginning to explore, formally, these kinds of more subtle questions that may not have an answer. And I also really wanted to do a dance film, and so that was the leading impetus for pushing it towards fiction.

I’m glad you mention allegory, because to me, finding a good starting place to discuss The Fits is very tricky. There’s a lot going on here. How do you start at your starting place and then expand it into something this layered and complex?

One of the ways that The Fits evolved, organically through this process, was through including a lot of voices as authors. I co-wrote this film with two other women, Saela Davis, my editor, and Lisa Kjerulff, my producer, and so I think even from its initial draft, what The Fits meant to each of us was individualized. We were working towards a collective goal, but there were elements that each of us were bringing from our distinctive perspectives about that moment when you really allow yourself to be seen for the first time by a group, and what that means. There are some easy ins to the allegory; we are familiar with the coming-of-age genre, and it’s something that we’ve all gone through. In terms of gender identity, there’s also a pretty easy in. And then just in terms of individual and collective identities, one of the big themes for us is how the power of the group can be a positive. It can be very scary; I think this idea that you might lose yourself is a real fear, and I think adults feel that, too. But there’s this power and joy in being part of a team that we were also trying to explore.

The way that I got into The Fits is through movement. Toni’s journey can be boiled down in a really simple way. She is learning about the joy and freedom that comes not through controlled movement, but accessing this other area of uncontrolled movement. When we first meet her, she is very rigid and precise with every step, and push-up, and move that she does, and through exploring dance and her friendships, especially with Beezy, she learns about play, and freedom, and letting go, and what it means to give up control to get somewhere else.

That is the allegory that I think is the root and the base, because our film is so movement based. Placing The Fits in an allegory about the power of dance and what it means to really give into that power is the one that continues to resonate with me. There are so many ways in, but that’s the one that sticks. 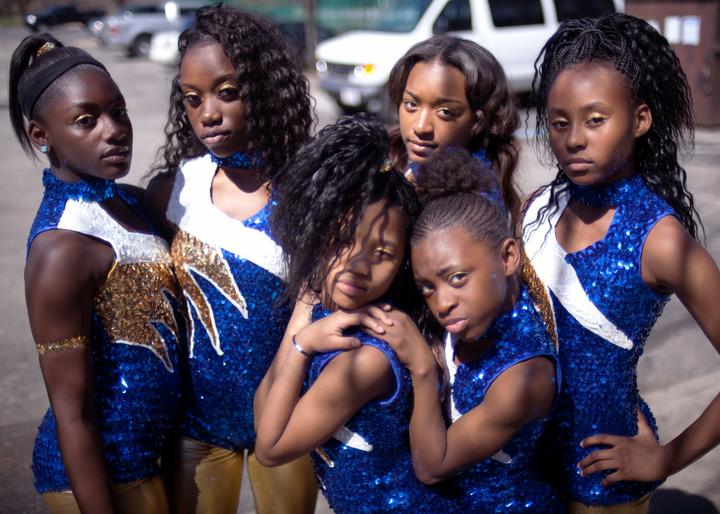 You have this coming-of-age story that’s also about social alienation and assimilation, but I like that there’s this emphasis on the dance itself. And I like that the film creates a relationship between boxing and dance. Do you see those two things as related in their own context?

Totally. I love boxing. I think it’s a very cinematic sport. I actually wrote a very nerdy little paper on examining some sequences in Raging Bull as dance on film in college, and I’ve always seen it as that. So boxing was a great place to start Toni, and then looking for a dance that didn’t seem so far away, that could borrow some skills but also require her to move in a way she’s never moved before. Boxing is a great counterpoint to dance–any dance team where it’s a team of choreography–because boxing is a very individualized sport. You win or fail on your own efforts, and it’s really about measuring your own skill-set against one other person, whereas dance is about… there are solos, but in the context of a dance team it is about moving together, winning together, losing together, and I think that that’s what’s great about the compare and contrast.

The drill choreographers that we worked with, Mariah and Chariah Jones, we did try to bring in a lot of the physical vocabulary of boxing into the fan battles that we showed on screen to merge that gap, to make it as easy as possible for Toni to go from one space to another.

In addition to that, Mariah and Chariah did an incredible job of infusing that entire main phrase that you see again and again in the film with many hints to the narrative of the film in a subtle way, so that as an audience, you can watch Toni do this dance again and again, and as she changes it’s almost as if the choreography changes, and it really blossoms into a very feminine and graceful phrase, which is not present at all when she’s initially doing it. They did a tremendous job, and it was a great collaboration with them on that as well as the finale sequence, and how you can build a world through dance.

I love the finale sequence, because it shows how great Royalty [Hightower] is. Because even as you do the montage, and you go from one shot of the girls dancing to the next, and they keep getting bigger and bigger, you can always find her in the crowd. I think that’s phenomenal.

Yeah! Yeah. The way that it’s written in the script is, “In the sea of bodies, you can’t keep your eyes off of her.” And I think that’s the same for each of those girls. In the context of the group, they become their best and brightest selves. There’s power in that. I think that’s Toni’s fantasy. But Royalty, as a performer, she’s been dancing with the Q-Kidz since she was six years old, so we really had to rein in and work with her to create the illusion that she is not a dancer. Really seeing the joy of dance on her face and in her movement in the finale sequence is very moving. I find it very moving, too.

That sequence for me is about the joy of childhood as it should be versus the terror these children feel, this existential dread they feel throughout. 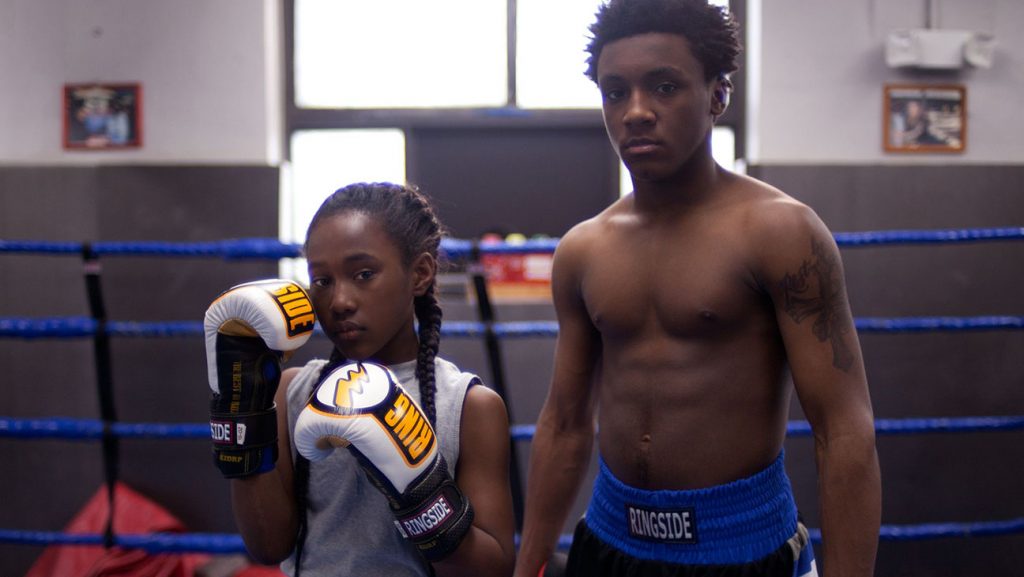 It’s cool. When she’s boxing, she’s an individual, and being an individual is a struggle, but when she’s dancing with these girls she’s part of something greater than herself. It’s pure euphoria. Collaboration is the theme here and I imagine it’s also the driving force behind the scenes too.

Yes. I think filmmaking is a prime example of the power of collaborative thinking and collective action, you know? It was a joy for me to be able to open up this process; I cowrote it with two other women, and we have always said that this is our film. When we collaborated with the Q-Kidz, and started to really adapt our script to the community in the West End, it was such an open book, and really invited the kids to see themselves as authors. At every step of the way, I felt like every collaborator we brought on saw this film as their film, and took ownership and pride and joy in what they were bringing to the table. That’s our philosophy as filmmakers: To make it open and invite others in, because the beautiful thing about film is that you can bring an audience into someone else’s perspective. And that’s what great collaborations do as well, sharing your vantage point with another, and debating, and finding a middle ground. You really can achieve more than you ever could on your own.

I’ve read you talk about the kids as being their own authors.  I’m wary of using the word “authenticity,” but I think that’s a central component of what makes The Fits feel so authentic.

Well, being an “author” doesn’t mean that you are being yourself. I think the freedom was there to explore the performance together. Royalty is not like Toni at all, but she was bringing her vantage point to the table, and it’s distinct and highly valued in this process. As with all the other girls, they are leaning on their own experiences as we all do, because that’s what we take with us and carry with us every day, and I think that finding that middle ground where we could share our experiences off-camera, and build a new experience together, was something that was very important. It’s just our philosophy of how you make a film. And I don’t think that that is exclusive to working with kids or to working with “non-professional” actors. That’s also our philosophy in working with my DP. He is bringing himself to the process, and that’s beautiful.

You’ve been described as a fresh female voice in filmmaking, and in the year of #52filmsbywomen hashtag, that reads like a very particular honor. I think you need more than a hashtag to raise awareness for female filmmakers and female stories, but how does that feel to be singled out amid all of that?

It’s great that it’s starting to become a conversation point. The numbers are dire. Someone described them as “falling within margin of error.” [laughs] It’s pretty brutal out there. But ultimately headlines and panels and even hashtags don’t change things. Hiring people changes things. So I’m really motivated by just continuing to do work, and I hope that that is part of a sea change that feels inevitable. But I can only continue to work. Ultimately, it’s taking action that creates change.